My Body Lies, But Still I Roman

On the far side of town, Glurk's apprentice, Roger, led a small group of minions through the abandoned graveyards. The four explorers - Scarlett, Maud the Markswoman, Sir Vaylance the Vigilant and Roger himself - hoped to look for relics among the ancient tombs.

But ancient eyes watched them - or would have watched them if they hadn't decomposed a long time ago (the eyes, not the explorers). The long-dead commander Flavius Flavor put on his special fighting hat and consulted the omens on the portable sundial that he wore around his neck. He would destroy these interlopers and fix it so they never interloped again. From the tombs around him, the warriors of the Infelix Legion shambled out to fight one last battle...

This was the second solo mission from the Frostgrave Folio, entitled "Skeletal Run". The aim was to get from one side of the board to the other, hopefully collecting treasure en route and avoiding burning skeletons. I didn't have any burning skeletons (does anyone?) but I did have my undead Romans (I knew they would come in handy!).

To begin with, it all looked pretty easy. The heroes surged up the left flank of the board, pausing only for Maud to casually shoot down one of the undead legionaries with her crossbow. Roger embarrassed himself by failing to cast Leap twice, and taking three wounds in the process (I assume he tripped up and fell on his own wand). He made Glurk's feeble performance in the last game look like Merlin.

A skeleton leaped out and attacked Sir Vaylance... 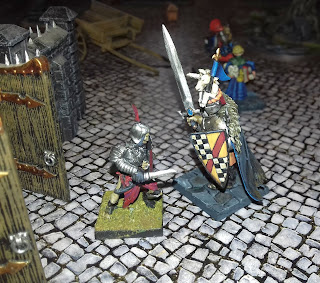 ... but Vaylance wasn't having any of it. 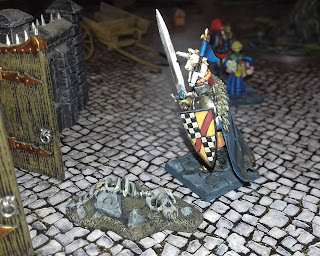 Scarlett grabbed a treasure chest and everything seemed to be going well. The explorers pressed on, thirsting for honour and the prospect of robbing a graveyard. 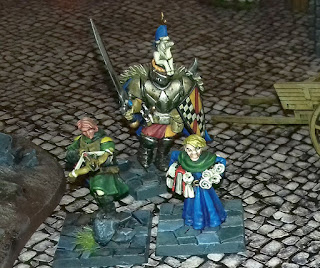 However, the revenants were closing in. The soldiers of the Infelix Legion approached from every side. 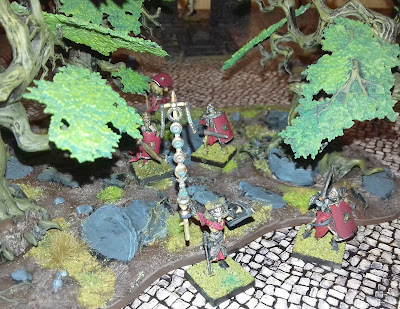 Only a few inches from the edge of the table and safety, the undead caught up with our bold kleptomaniacs and a fierce battle commenced. 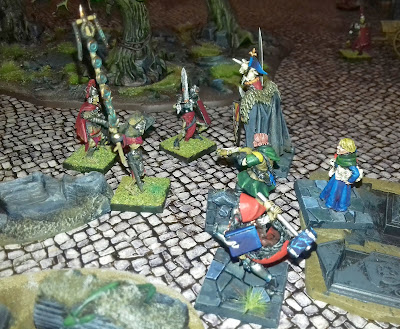 Vaylance was badly hurt and, for the first and only time in the game, Roger's magic worked. Roger used Leap to get Vaylance out of danger and the noble knight ran for the hills. Next off were Roger and Scarlett, leaving poor Maud behind. Yet, in a surprise ending, the markswoman brained several undead with her crossbow and ran off the table. Exciting stuff!

No doubt there was some awkward conversation around the campfire when Maud returned. In the meantime, the Infelix Legion took the opportunity for a group photo. 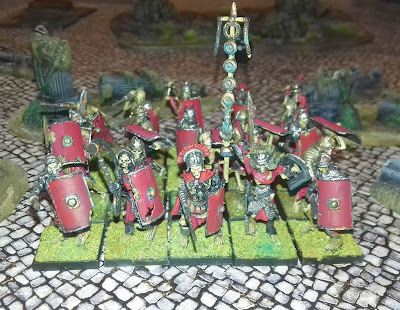 All in all, it was good fun. On to the next installment!
Posted by Toby at 09:28

Great stuff! The guy with all those scrolls under his arm is one of my favourite Fantasy models.