At some point, I seem to have acquired a Keeper of Secrets, the greater demon of Slaanesh. Slaanesh is the chaos god of pleasure, which in practical terms means extreme discomfort. This is a very old multi-part lead model. I thought it would be interesting to try painting it.

To begin with, I thought it was a pretty terrible miniature, but as I got stuck in I found it well-sculpted and quite enjoyable to paint. It's certainly old: despite being multi-part, it stands in a very two-dimensional way and isn't very dynamic (unless it's about to do a pelvic thrust, which is actually quite possible). It also leans back a long way (again, perhaps counterbalancing for its pelvic gestures). The detail's not bad at all, though. The main problem is that a four-armed demon with pincers, one boob and the head of a cow isn't really all that alluring. Perhaps this is the form that Slaanesh takes when it wants to mess someone up. I mean, just look at it. 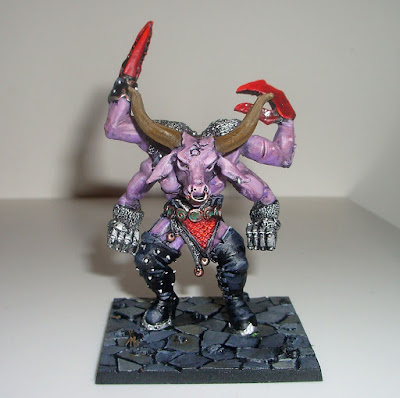 Anyway, it was actually quite enjoyable to paint. The black leather was a challenge and, to quote Hannibal Lecter, I was able to... do things with the ssssskin. I decided to base it on one of the Mantic sculpted bases that I use for Frostgrave, because it feels more old-school and really, something like this belongs in a dungeon.

A while ago, I got a number of Privateer Press models in an ebay auction. They were from the Eyriss faction, which are basically elves. I really like some of the Eyriss character models (and I really don't like some of the others). They have interesting armour and I thought they would make good eldar pirates or mercenaries. Here's the first of them, in WIP stage. I removed the rather silly weapon that she came with and put some eldar bits on instead. 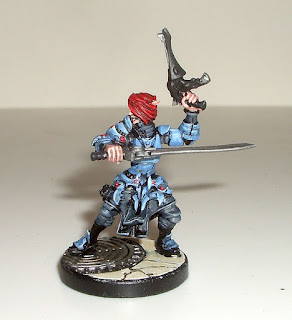