And so it was ordered that the great Relics, Statues and Reliquaries of the Order of Saint Triniana should be borne into battle, as was right and pious. Then Cannoness Gwendoline the Irascible did decree that the statue of our Most Wrathful Lady should be carried upon the legs of a Sentinel. And there was much rejoicing.

And there was much rejoicing and/or wailing and gnashing of teeth, as appropriate. 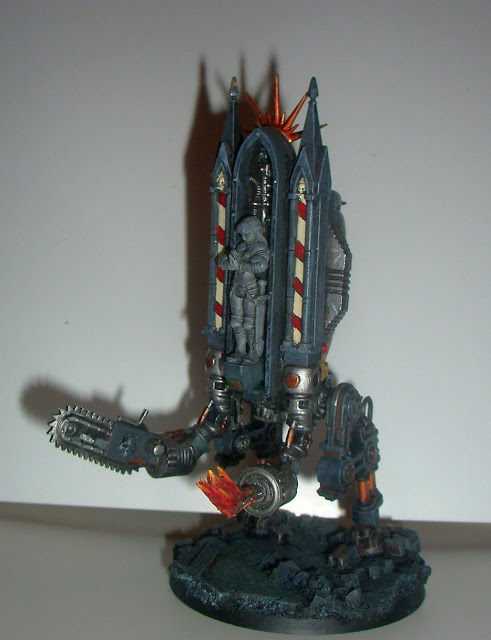 While I'm a big fan of the tanks and power-armoured Sisters of Battle, I'm less keen on the half-naked flagellant element of the army. The Penitent Engines, especially the new ones, always felt like a missed opportunity, and look more like crude and rusty torture implements than the ornate bits of sacred war-machinery than I imagine them to be. I see them more as bits of gothic masonry come to life. 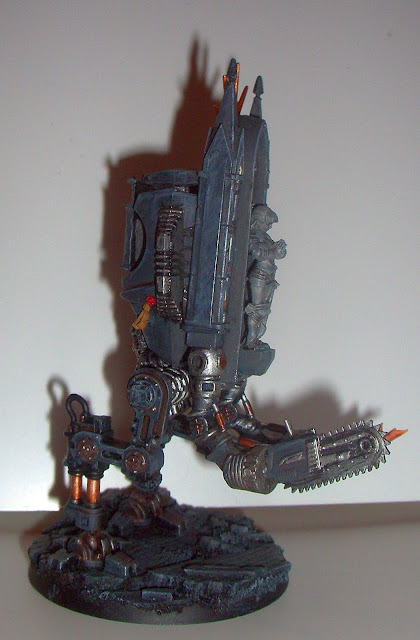 I made the main part of this model ages ago. It uses a Hasslefree miniature as the statue in the centre, with parts from 40k and the Warhammer Garden of Morr (mainly gateposts) to bulk it out. The power unit at the back came from a plastic toy, as did the arms. The legs are from a Sentinel. 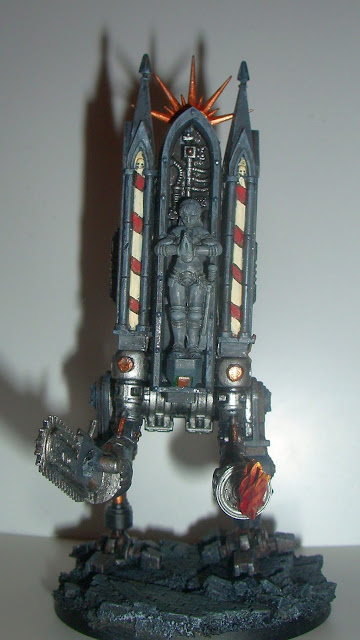 I think it looks suitably deranged, and will fit nicely alongside the other Relic Engine: 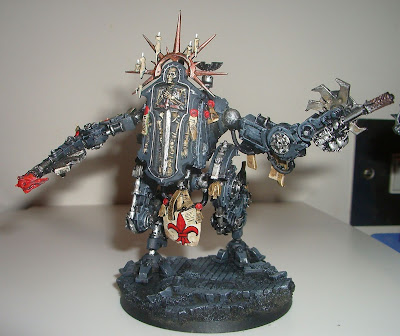 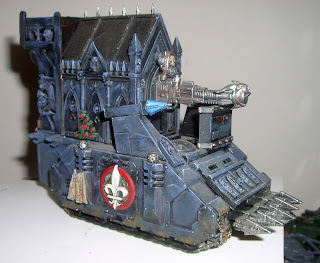 Email ThisBlogThis!Share to TwitterShare to FacebookShare to Pinterest
Labels: Goodness only knows, Sisters of Battle, Vehicles

A very long time ago, I bought some random Chaos bits off ebay. One of the bits was half of a Chosen space marine from the old Dark Vengeance boxed set. These models came in two bits, presumably for ease of manufacture. Unfortunately, I was missing the bit that contained the marine's forearms, head and most of his shoulder pads.

I decided to rectify this by giving him new arms and a whopping great rotary cannon. I cut and repositioned the legs so that he would be posing dramatically with one boot up on a rock. He got new arms from an ancient plastic space marine, a new head from an old chaos champion, and a lot of green stuff and plasticard to bulk out the missing pauldrons.

(This, I should add, was really hard. Green stuff is fine for filling gaps, but I find sculpting with it very difficult. I ended up using some tips from this excellent and under-followed Borgnine's Painting blog. In particular, I was careful to let one load of green stuff cure before trying to do another. I'm still not 100% happy with my efforts.)

His gun was built out of half of an ork autocannon that I had lying around (as you do) with an ork nob's magazine and a barrel made out of an Empire outrider's gun (thanks James F). I think it looks suitably excessive, as if he nicked it off a helicopter gunship. 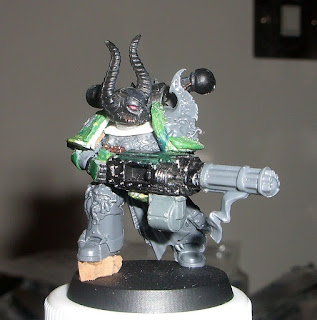 And now with paint. I went with my usual not-quite-Black-Legion colour scheme, with slightly more gold in this example to reflect his higher status (purely on the basis that he's got the big gun). 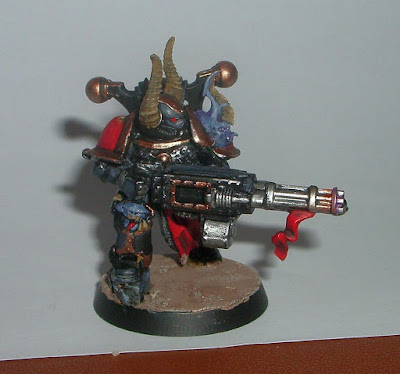 Here he is next to the model from which he was converted. 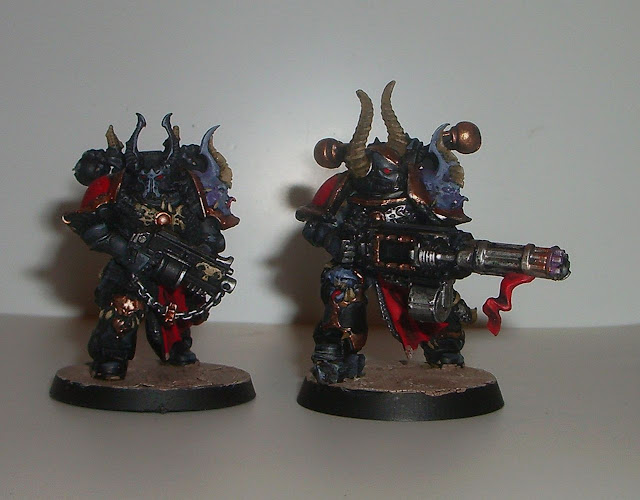 I've never really seen chaos marines as evil: everyone in the 40k world is a knob (except ork nobs, who spell it differently). It's more that the chaos marines rock hard and do what they like, like pirates, while the normal marines are more boringly obnoxious and follow orders. Anyhow, this guy will be rocking very hard.
Posted by Toby at 02:41 1 comment:

Things are hard for everybody at the moment and, like a lot of people, I'm basically in hiding now. I've spent the last week writing like crazy, and doing a bit of painting. As it's no longer feasible to go out to get new models, I've turned to the huge heap of unpainted miniatures that I've built up over the years: largely things that I got at conventions because they looked cool.

One of these is an orc sea-captain from Black Scorpion, designed for their skirmish game Cutlass. He was resin and, like almost everything they do, a really nice sculpt. I made him a base out of coffee stirrers and painted him as he came out of the box. 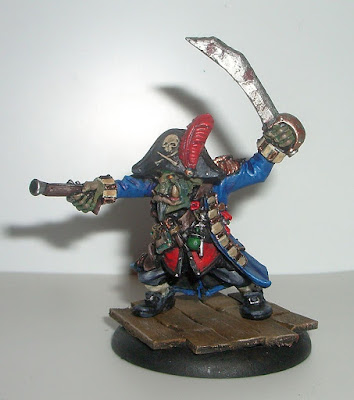 Captain Morkgan is a coarse, violent, foul-smelling kleptomaniac with a broad Sumorkset accent who long ago pickled whatever small brain he had with a combination of seawater and naval rum. Consequently, he is greatly respected by other pirates, who secretly think that being an orc would be rather good fun. 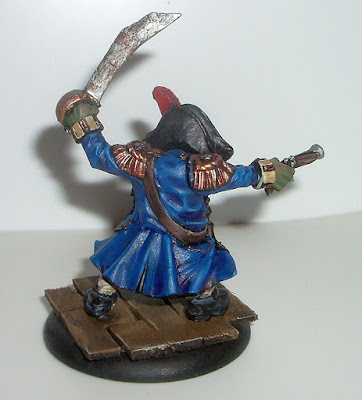 More next time: stay safe everyone, stay inside, and paint your old miniatures. Best wishes to everyone!

Warband of the Seasons

The Warband of the Seasons is finished! I completed the last warrior of the band a couple of days ago. She's based on a Stormcast Eternal, with a head from Hasslefree and the shield I made a couple of posts ago. The axe was made from a savage orc weapon: I think it fits the rusty concept. 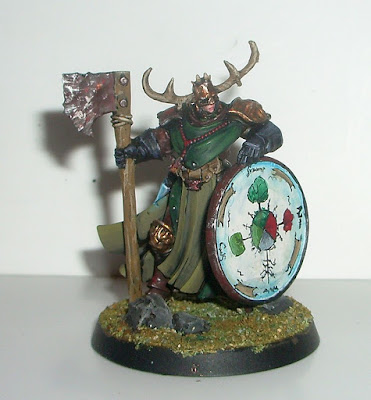 So, here is the completed warband. I think they represent some kind of yokel cult, who celebrate the arrival of spring and summer with wild dancing and the like, and the things they summon. The two knights are probably semi-magical figures who wax and wane with the seasons. The dryad is a being of the deep forest, that ventures out to celebrate (and wreak havoc).

What shall I do with these guys? Well, I've got vague plans to try to "medievalise" the rules for Hardwired, in order to do a fantasy variant. That might be good fun, and this warband would make a good squad of champions for it. I'll have a think about it, but Hardewyred is definitely in the project list.
Posted by Toby at 14:53 4 comments:

It's been a fairly quiet week. A while ago, I got a couple an old metal Privateer Press model for £2, and I thought that I'd have a go at painting it. It's the "Iron Lich Asphyxious" from the Cryx faction, who are basically steampunk undead.

I thought he'd made a good techmarine - sorry, warpsmith - for the 40k Chaos army. The model has a mechanical look, and the background in the Chaos book says that some warpsmiths are almost entirely robotic, so that seems to fit. I tend to find that techmarine-type models are very busy, with arms and tentacles going everywhere, but a bit of a mess, so I kept this guy simple.

The only conversions I've done are to put a metal clamp on the end of his staff, and to replace his head with a ridiculous chaos helmet that I had lying around. The huge horns look pretty silly on any model, but given that he's already very big and spindly, they don't look too out of place and hopefully emphasise his height. I added a couple of bits of rusted machinery to the base to further link him with his role, and painted his robes red to suggest a link with the tech-priests of Mars.

A quick and fairly odd one, this.

I found an old ink cartridge for a printer lying around. I stuck it to a plasticard base and added some odds and ends from the bits box, including a TT Combat resin computer terminal, a spare base and a sigmarine shield. 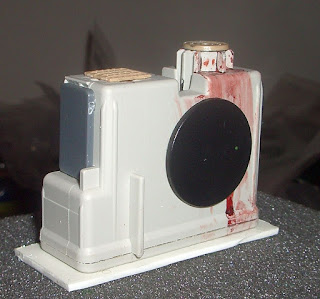 Then it got some paint. 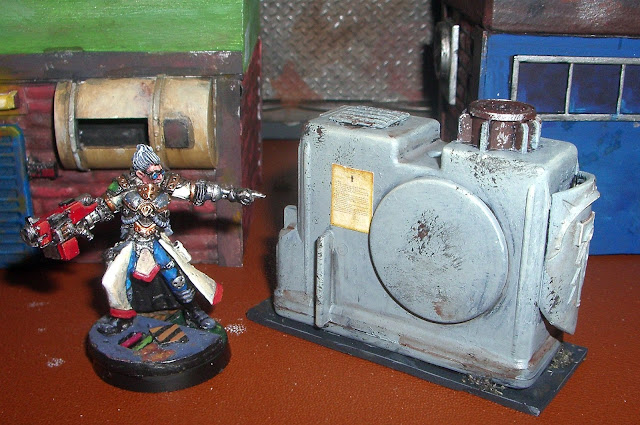 I think it's some kind of generator, which is my default answer to explain strange bits of tech like this. The posters came from a printable sheet that was on the Games Workshop website for a while. 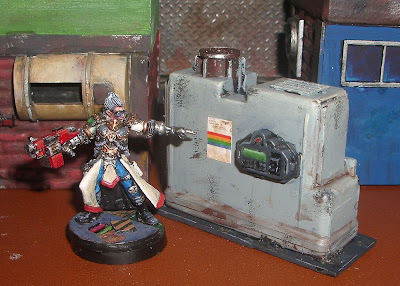 This week, I've made two more loonies for the warband of season-worshipping loonies.

The first is an old metal dryad, from an incarnation of the wood elves from about 2000. He's more cartoony than the current models, but I really like the pose. Here's a rather pointless WIP shot: 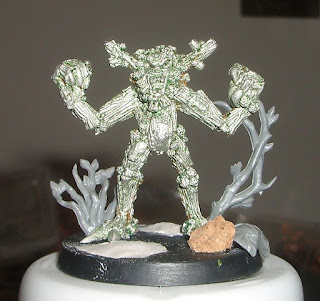 And here's the finished article: 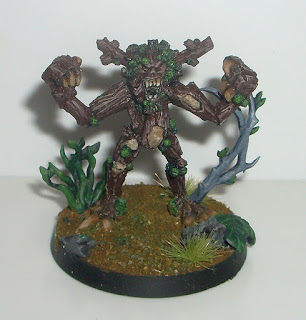 Second, we've got a maniac with a flute. The body and head for this model came from the Empire flagellants kit. The arms (and flute) were from some Empire soldiers, and the axe came from a sprue of Mantic undead that I hadn't turned into Romans yet (soon). Here's the WIP: 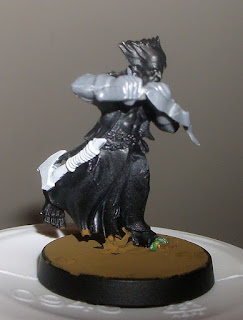 And here's the finished article. In making this warband, I've tried to ensure that, instead of a uniform, colours and styles are repeated on different models. So, this guy has the same green and brown as the knight and the dryad, and has an axe like the knight. Also, he has flowing robes and bare feet, like the priestess, and carries a chequered scrap of cloth to further tie him to the knight. I imagine that he leaps about and tootles madly on his flute to celebrate the arrival of spring (or combat). 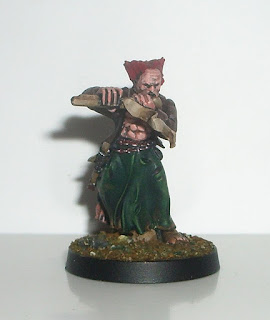 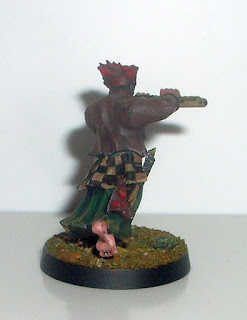 Here's a group photo so far. Hopefully, they're all individuals, but they look right together. 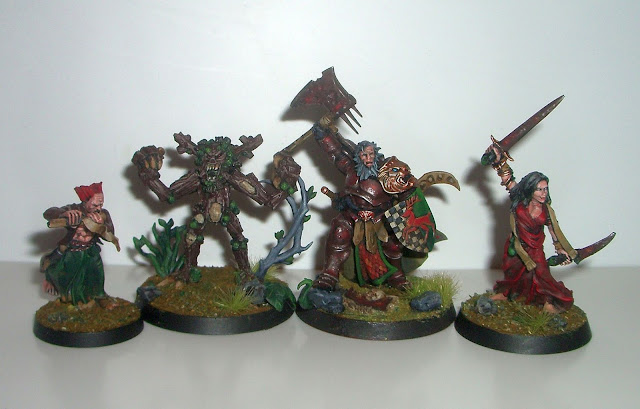 The other thing I've painted this week is a shield for the fifth and last member of the warband. I was inspired by the wheel of life in the trailer for The Green Knight that I mentioned a couple of posts ago. The shield is quartered, each quarter representing a season, and using the same colour scheme as the warband. It's actually a Warlord Games base painted with thinned down GW paint. 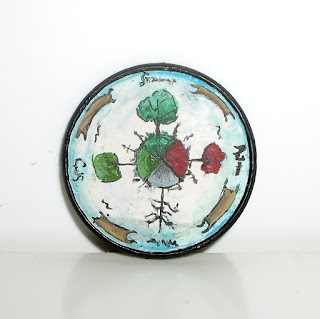 If this blog ever needs a corporate logo, I might have just made it...
Posted by Toby at 10:16 4 comments: