It's been a comparatively long time since I posted here. So, by popular request (or the closest I ever get to it), here's what I've been working on for the big Frostgrave solo-player game.

The single-player Frostgrave scenario that I'm going to try requires one huge monster and a few little ones. Technically speaking, they are an "alchemical monstrosity" and a group of giant rats. While I have loads of models that could count as monstrosities (especially after I've painted them, haha), I don't have any giant rats, at least not any that are in a decent state.

Instead, I decided to use goblins. I've got tons of Ogre Kingdoms gnoblars, which are skinny little things that look like even less competent versions of Warhammer goblins, along with quite a few random familiars and some old metal models that will fit the bill. I see them as a varied and basically incompetent horde, rather like the goblins from Labyrinth.

So, here are some of the hard-living thugs and hoodlums that the good guys will be up against. There's definitely a bit of a Brian Froud/Arthur Rackham influence here.

On the left is a very ferocious sprite, called Warfairy. 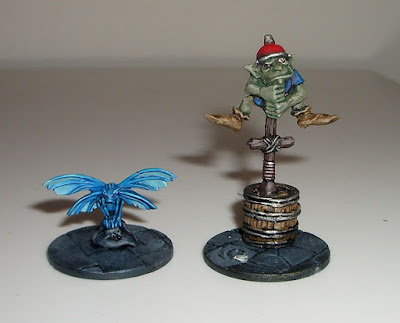 On the right is a goblin on a pogo stick, with which to bounce onto his enemies' heads. He is currently practising on a Renedra barrel (which, by the way, went together dreadfully).

The brutal creature on the left a goblin barbarian. He's all set to dance the magic dance, by which I mean hitting people with his hammer, assuming that he's got the strength to lift it. 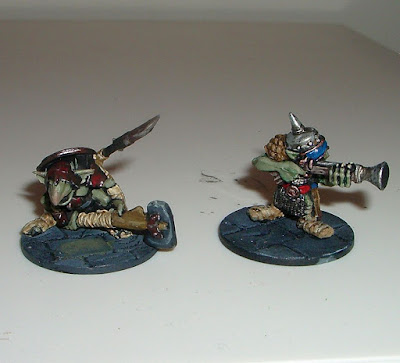 The guy on the right is a metal gretchin model, armed with a blunderbuss. He is so gangsta that he's got big sunglasses and, er, a kaiser hat.


On the left is the magical (and tiny) knight, Sir Plus de Requirements. 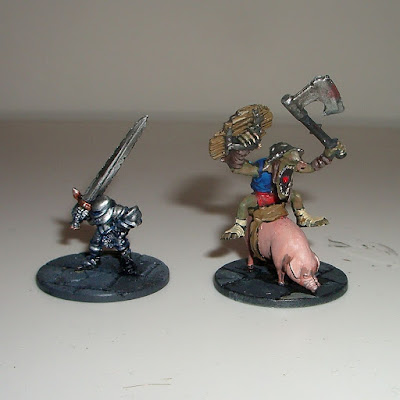 And on the right is a gnoblar riding a Warlord Games pig. "Do anything good at the weekend, mate?" "Yeah, I dressed up as a knight and went joyriding on a pig. How about you?"

In fairness, these are pretty tiny models and the plastic ones, especially the gnoblars, are a bit imprecise in detail. It's a shame because I really like them. I often find that it's the low-ranking, runty creatures that are the most appealing, followed by the really big, weird monsters. There's a mid-range of armoured rank-and-file that doesn't do a lot of that for me.

Anyhow, on with the Frostgraving. Next time: the battlefield.
Posted by Toby at 14:17

Cracking work on the gobbos!

It's a really nice little collection of rambunctious rapscallions to menace your heroes with and the little sprite is cracking too!

Thanks! It's all nearly ready - exciting stuff!