Hello again. This is probably my last post of the year, and I'd usually attempt some kind of summing-up, but frankly that feels like a lot of effort. The year was rubbish but it could have been very much worse, and I was able to stay safe and paint some miniatures. That's about it, really.

I've always been somewhat undecided about Warlord Games' models, especially their fantasy and SF stuff. Historical gaming doesn't interest me very much, especially the Napoleonic stuff (although some of the outfits are nice, and the late Renaissance is quite cool). However, I was looking though their sale recently, and saw some of the Freeborn models from their Gates of Antares range going cheap. I bought a Freeborn howitzer, because the crew would make really good Fremen. So here are the three crew. I think these are really good models, and it's a shame that you can't buy them individually. The two assistants are actually carrying ammunition for the howitzer, rather than guns (at least, I think so) but I think their ammo could actually make quite good far-future heavy weapons of some kind. 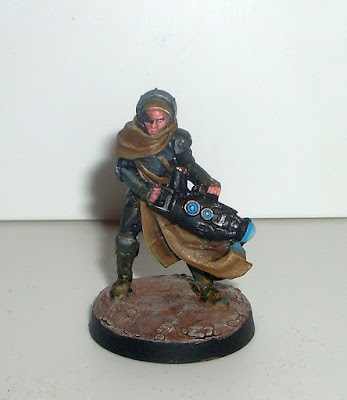 I did a very small conversion on the second loader, cutting and turning his head a little so that he was looking in the direction his gun was pointed, as if firing it. 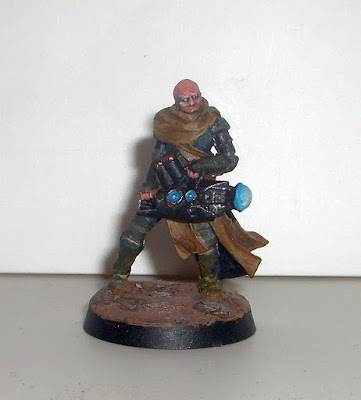 The commander of the gun would make a good Sayyadina, a priestess of the Fremen. 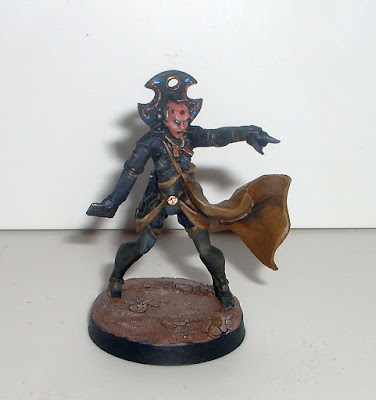 And that's it. I think that's the Fremen group finished - until I find some more of them.

Email ThisBlogThis!Share to TwitterShare to FacebookShare to Pinterest
Labels: Fremen

I've always liked trolls. I'm not quite sure why, but I think it's the mixture of comical gawkiness and crude brutality. People might laugh at trolls, but I reckon they'd do it from a safe distance. Ages ago, I somehow ended up with an undead Mantic undead troll. I liked the shape of the model, but I thought he'd look better alive. 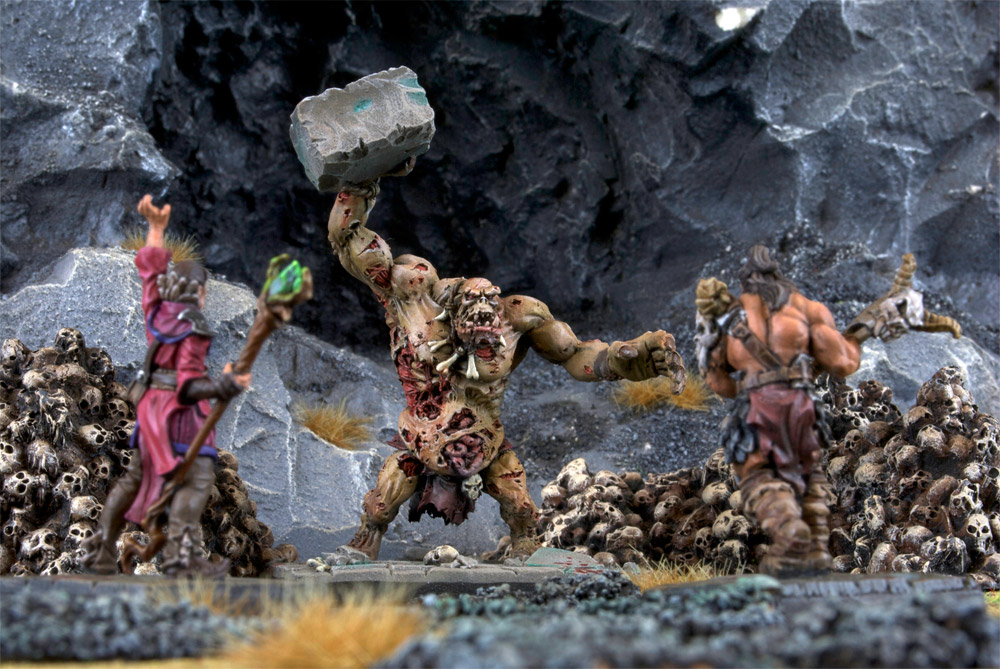 First, I removed his existing, rather orc-like head and replaced it with a head from the recent GW trolls (or whatever they call then now). I then spent quite a lot of time filling up the various rotting holes on the model with green stuff and DAS clay. 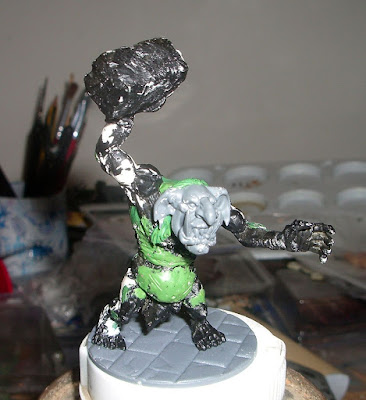 After that, it was just a matter of giving him a suitable paint job. I went for the same blue and grey colours that I'd used on an earlier metal troll, in imitation of the old GW stone trolls. I quite like the main body of the miniature but, as often happens, the really nice new head makes up for whatever errors there are in the sculpting of the body. 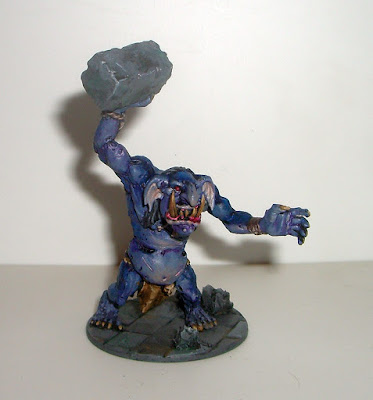 All ready to bash his enemies with his favourite lump of stone!

Until the release of the new Chaos marine plastics a few years ago, the 40k Chaos army was looking pretty long in the tooth - and not in a wolf-like, fanged way. The new marines are very nice, but there are still some ancient and rather ropey models in the range that need updating: most notably, the Berserkers of Khorne.

Chaos bikes are another seriously ancient unit. I reckon they current models have been around since 1998 or so, and they look chunky and dull (not that the old Space Marine bikes are much better). Anyhow, I had some bikes knocking around from a very old set called Dark Vengeance (as opposed to Happy Vengeance or Merry Vendetta), which I'd started converting ages ago and then abandoned. I thought that I'd have a go at converting them into something more chaotic and more interesting.

All the bikers got new heads. The first got a lot of spikes growing out of his bike, along with some strange bony protrusions. I decided that all three of the bikers would have unwholesome tubes connecting them to their vehicles, perhaps where they were starting to merge with their rides. 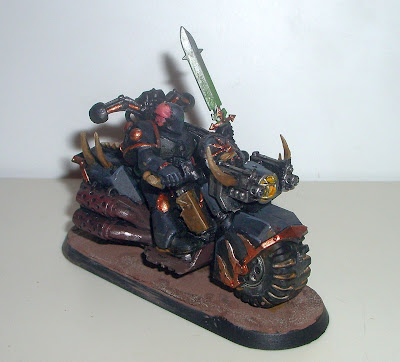 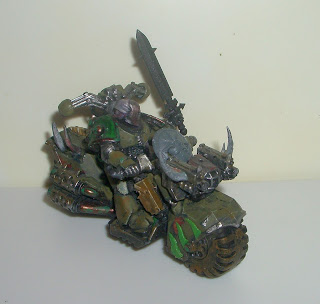 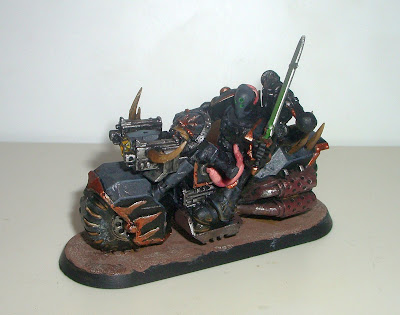 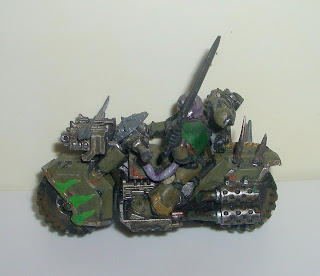 The second biker had a sort of weird pump fixed to his bike instead of a backpack, as well as a big skull to act as a sort of windscreen and some manky fleshy stuff coming out of his chest. Nice. 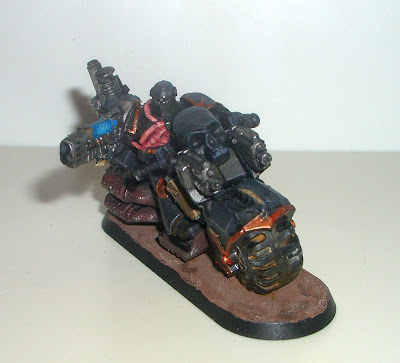 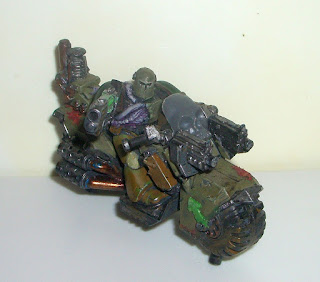 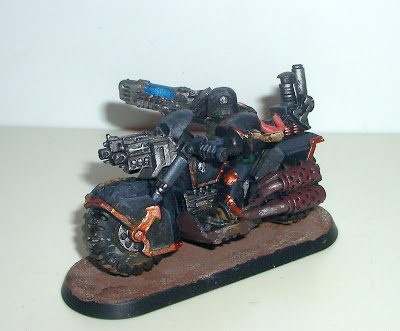 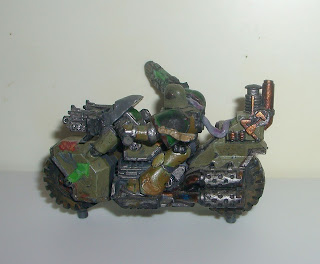 The third biker is probably their leader. He's got a daemonette of Slaanesh riding pillion. 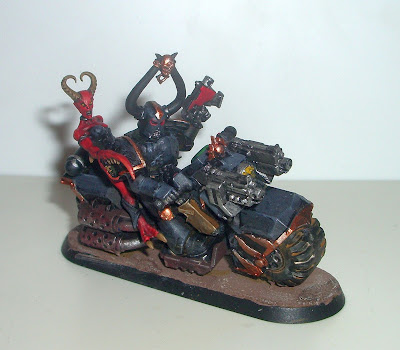 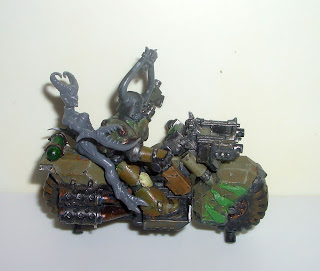 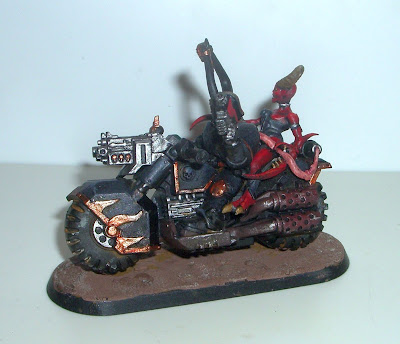 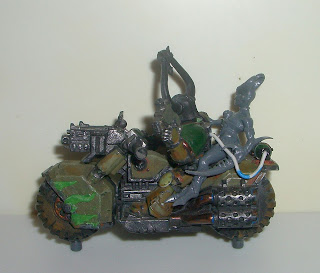 Lovely! They'll be able to raise some hell in the name of Chaos, assuming that quarantine ever lifts. Chaos grows ever stronger (and faster)!

So, back to the "schedule". Many years ago, in the depths of GW's "red period", they released Grom the Paunch, a fat goblin warlord. Grom rode around on a chariot and was modelled with one foot up on the railing, waving an axe and probably laughing madly.

I saw the model of Grom, without chariot, for sale and bought him. He's got a definite cartoony charm. I didn't make any alterations except to stick a bit of cork rock under his boot. 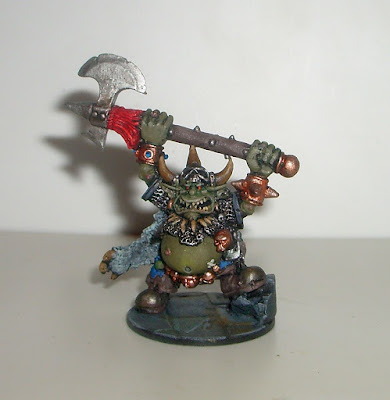 Email ThisBlogThis!Share to TwitterShare to FacebookShare to Pinterest
Labels: Oldhammer, The Goblin Horde

Following on from last week's experiments with object source lighting, I decided to move from being overcautious to going ridiculously over the top in one step. So, I painted a model from the excellent Frostgrave female wizard sprue: 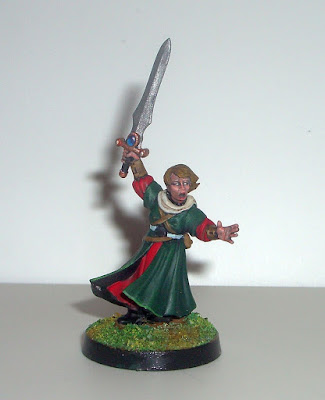 And then I applied OSL. 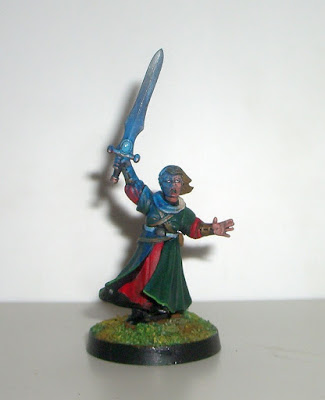 What do I think of the result? Well, in a "word", hmm. I keep thinking of the bloke from Braveheart when I look at her, and it does look slightly as if she's screaming in horror as The Blueness overwhelms her. On the other hand, it sort of works. Do I think it makes the model better? Again, I don't know. I'm glad I tried OSL, and I think I had a decent stab at it. Beyond that, it's hard to say.

I've been painting another old model from the box of metal miniatures. This time, it's a really old Khorne berserker marine that my friend Owen gave me. I think he's a World Eater - or, in the immortal words of the former Warhammer metal band Bolt Thrower, a WURRRRLLD EEEETAHHH. Sooner or later, every miniatures blog mentions Bolt Thrower. 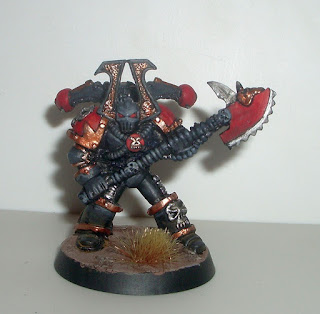 As with so many of these old metal models, the detail was rather soft and the model is pretty small, but it was a real pleasure to paint. There's something about the extreme detail and very sharp edges of modern plastic sculpts that puts me off a bit. It's probably that I find all the extra stuff daunting rather than anything aesthetic, though. Laziness rather than art.

Anyway, my friend James P suggested that I should have a go at doing some "special effects" on some miniatures. I thought I'd start with Object Source Lighting (OSL). I fished out some chaos marines I painted a while back and tried to make their plasma guns glow.

These two guys (who are basically the same model with a head-swap) have come out reasonably well for a first go. The OSL was done with a mixture of careful drybrushing and mixing blue into the existing colours. 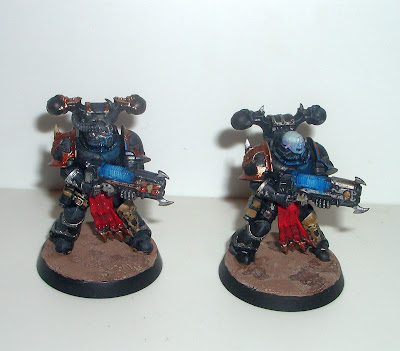 The third model was a bit harder as, realistically, the glow from his gun probably wouldn't reach much of his body. I tried to reflect that by not doing too much, but it looks a bit half-hearted. 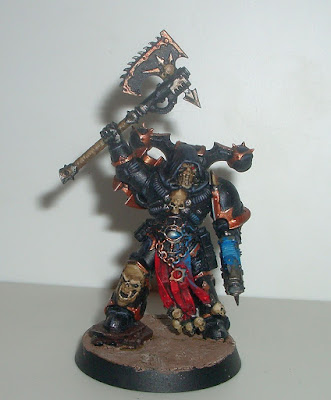 This is really just a warm-up, because I bought a sprue of female wizards for Frostgrave (excellent sprue, by the way), and I'm going to have a go at a much grander lighting effect on one of them. But that's (probably) for next time.