Here are the next couple of samurai adventurers from Warlord Games. The bloke on the left is armed with the traditional samurai weapon of... a baseball bat made out of a massive corn cob. He's either wearing a ruffled fur cloak or a small thatched roof. Either way, he's pretty wild. I reckon he's a bandit.

The other chap seems to be a monk, together with a robe and staff. I used contrast paint on his robe: as usual with contrast paint, it's come out alright, but not much better than that. While it shaded the creases quite well, I ended up highlighting it with a mixture of normal yellow and orange contrast. I'm still not convinced by contrast paint. 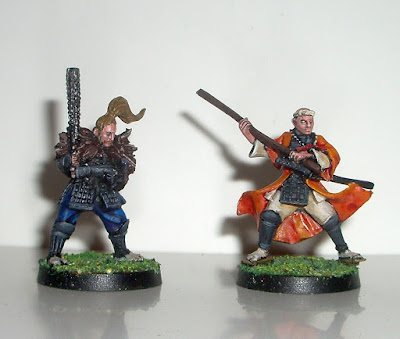 Anyway, little titans next time.
Posted by Toby at 10:07