Over the last couple of months, I've been painting older models and trying to work my way through some of the large box of things that I've accumulated over the years. This has been fun, but I started to miss converting things, so I thought I'd make a random miniature.

I decided to go for an old-school, Realm of Chaos-style model. I had a Brettonian cavalry horse, which would make a good basis for a mutant steed. I gave it a new muzzle and crest from a Kroot warrior, and a tail from a random tentacle that I had lying around  in my bits box. The rider has legs from an Empire outrider, a Dark Eldar upper body, Adeptus Mechanicus arms and a head from a daemonette that reflects the crest of the horse. The little creature on the base came from some familiars for Warhammer Quest. 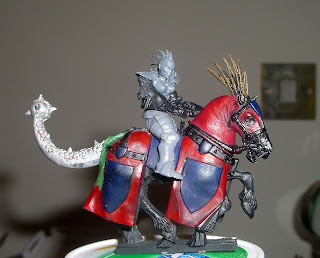 I painted the horse blue for additional weirdness. Painting horses strange colours always looks a bit My Little Pony, but I think it's alright here. The horse's barding got a bone undercoat and was shaded down into sepia and rusty orange at the bottom. This strikes me as an old-fashioned scheme: a lot of older GW art has that brownish tone. The rider got some strange green armour and quills to match the horse. 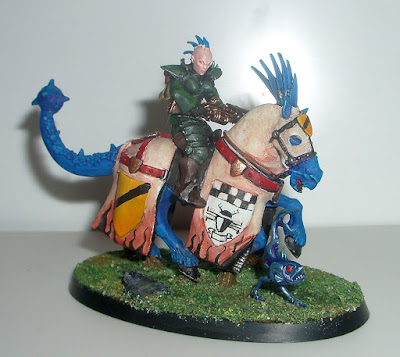 The basing was a bit of a problem. To begin with, I put her on a green grassland base, but it looked too "classic fantasy". I used a wasteland-type base instead, which works nicely with the colours of the barding and looks suitably strange. I'll use the green base on my next zoat. 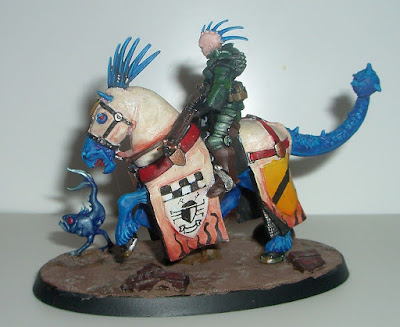 It is said that smaller deviations, if tolerated, lead to greater horrors. In this case, a wasteland hunter is using a small mutant, in the form of a walking fish, to lead her to larger and more lucrative prey. The markings on her steed's barding show that she is a member of the Lodge of the Stag Beetle, a powerful conclave of hunters and caravaneers. The yellow shield with a black stripe denotes success as a destroyer of robots, which are an increasing threat in the wastelands. 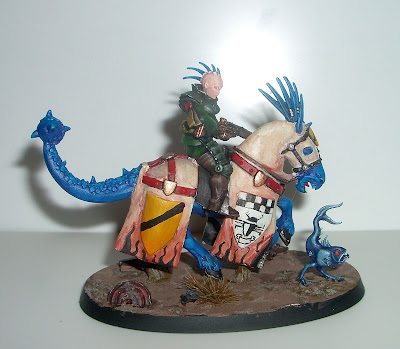 You made absolutely the right choice by swapping out the base. The original one was to lush and green, whilst the new one reinforces the setting nicely. I really love the blue mutated horse - some subtle, but disturbing mutations!

I think so too. Funny how these small things become important. One thing I've noticed while doing this blog is that my level of "that'll do" has changed: I'm much more keen to get miniatures as good as I can than I used to be. Glad you like the horse - I was really pleased with the kroot head as a mouth.

Could have been taken right out of a classic John Blanche artwork, Toby!