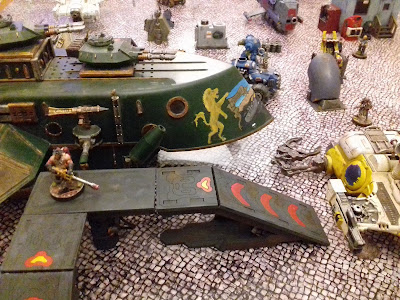 The spaceport rumbled with activity. Engineers welded up holes in a space frigate. Robot rickshaws stomped around, looking for trade. The five heroes left their hovercoaster and escorted the rescued pilot (her name was Pontius) across the landing ground, towards safety.


But on the far side of the spaceport, enemies were closing in.


Suddenly, a massive green creature lumbered into view. Knives and daggers covered its body. A greatcoat was draped over its shoulders like a cape. It wore a black bobble hat, minus the bobble. There was no mistaking this monster: it was Orke Waaagate, leader of the dreaded mercenaries known as the Dirty Half-Dozen.

Other orks crept out of the shadows, hefting dirks, axes and bolt pistols. This was going to get nasty.

This was a very different mission, as orks are tougher than humans and, crucially, can't be pinned, making them ferocious enemies. They were armed with bolt pistols and axes, and needed to close the distance to do damage. That gave the heroes two precious turns of shooting before the enemy got close.

Which they squandered. Gunshots rang around the spaceport, striking everything apart from the huge green mercenaries. The aliens charged straight into a barrage of fire, but only one of them - Waaagate himself - hit the deck. Dave stepped out of cover and sprayed the orks point-blank with two autopistols - and missed. Seconds later, the enemy mekboy charged in and bashed him senseless with a spanner.

Things didn't look good. Doctor Apocalypse hurled a grenade - which turned out to be his only one, as he promptly ran out of ammo. It hit three mercenaries, but only one was too injured to continue. Captain Fancy rushed into combat, twirling his rapier. To the surprise of everyone, his flamboyant skills paid off and another ork was felled.

Maria Poppinata and Doombot X-7 ran forward to give the orks a taste of steel. Unfortunately, Maria tripped over her carpet bag and was knocked out. A savage clash of steel and green flesh occurred as Doombot ran straight into the ork comms expert. The flesh was weak, and the ork crashed to earth.

To their credit, the orks passed their bottle roll. The penultimate mercenary fell to Doctor Apocalypse's blade. Finally, under the nose of the the space frigate Thunder Child, Captain Fancy did battle with Lee Morkvin, the last of the commandos. Morkvin was a tough opponent, but the ork gods had clearly been distracted by a shiny bottle top and fortune was not in his favour. Captain Fancy felled the brute, and the field belonged to the heroes.


The victorious team wiped their swords down, holstered their guns, and prepared to stroll into town. But in the distance, they heard sirens. Perhaps it was time to make themselves scarce...

Thankfully, Dave escaped unscathed, but poor Maria suffered a wound to her arm, leaving her with strength 2. However, Captain Fancy increased his shooting, and Doctor Apocalypse, the leader, gained a very useful boost to his leadership. Perhaps the team will run away less often now!

So, another battle went well! This was a lot of fun, and the sides were pretty well-matched, especially once the orks were within killing-range. My main lesson is that swords are really useful, and that close combat in Necromunda is much deadlier and more decisive than shooting - which isn't necessarily a good thing!