My plastic robots arrived! I bought the Khador Battlegroup set, which cost £30 and was, I think, very good value. It includes everything you need to get started, including an impressively dense colour rulebook. I doubt I'll ever really play Warmachine, but if you are planning to do so, it's a good starting point.

The box includes a warjack (that's Warmachineish for "robot") called a Decimator. Now, I wouldn't want to invest in a battle robot that killed only a tenth of the enemy, but perhaps I'm being a bit picky here. The Decimator looks like this, and is definitely the weaker of the two warjacks in the box in terms of looks:

He's got a funny circular saw thing and a sort of revolver-cannon with a rather weedy barrel. And his arms are spindly. And his head is too low and - well, generally, I don't like the design much, especially with those weapons. So I made a few changes. Brace yourselves for redness on an epic scale. 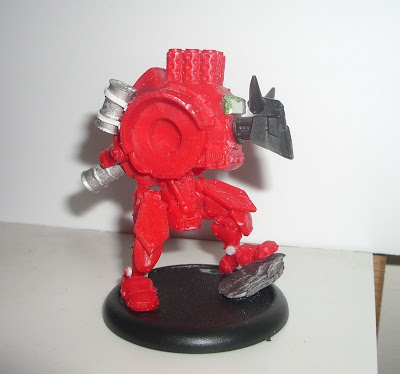 I've turned the body back-to-front and mounted the head from an ork banner on the new front, with cut-down horns. The ankles have been "fleshed" out with sprue to make them look less puny. He's got a Warlord Games barrel in his, er, power port (where his head is supposed to go), which contains fuel. A second fuel drum has been strapped to his back in a plasticard cradle. I cut the legs a bit to open them out so he could stand dramatically on a bit of slate and removed his metal loincloth, which probably wasn't protecting much, after all. 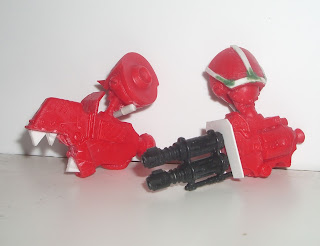 And now for the arms. The saw blade has been removed and replaced with teeth to suggest that his arm is a massive pincer claw. Silly, but less silly than before. I took the barrel off his gun, stuck on a shield made of thin plasticard and replaced the barrel with some leftover guns from an Adeptus Mechanicus walker. For no real reason I cut the spikes off his left arm and put some extra struts on the shoulder. Both arms had more pistons added to make them a little bit less flimsy-looking.

Now for the painting! I'd originally thought of him as a friendly-looking guy, but it didn't work out that way. I did a lot of shading and then used a lot of weathering, mainly to cover up the shading that I'd just done. It's probably excessive but I think it works in a cartoony sort of way. The base was bulked up with modelling clay, and some Vallejo Water Effects were added to form a little pool, along with a couple of tufts of grass made by Army Painter. 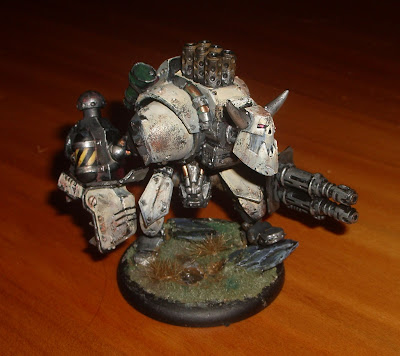 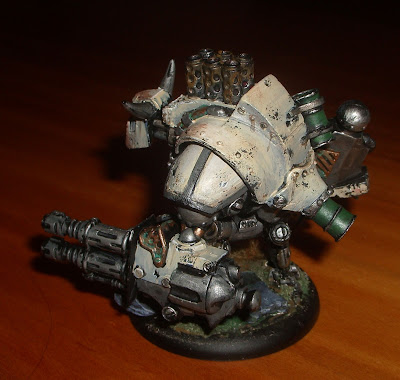 At this point in proceedings, I would usually say that I think he's not too bad or something like that. But to be honest, he's one of the best conversions I've done for ages, so I think he's great. So there.
Posted by Toby at 15:33

I completely agree with all of your critiques on this mini. The worst part for me are the titchy thin legs. How the hell is something so big & bulky supposed to be supported by those twigs?

Anyway, your the first person I've come across who's had a crack at fixing this thing. You did a great job Toby, well done!