Weak sunlight filtered through the huge hole in the cavern roof, throwing shadows across the rubble. The Terror Bird Cavalry crept through the ruins, weapons readied, boots crunching on the loose stone.


“Then take that bucket off your head,” snarled Algebra Flaps, the leader of the gang.


Emanuelle Porridge tapped Flaps on the arm. “Boss, what’s that?”


She pointed with her gun. Among the ruins, a row of barrels lay half-buried in the dirt, where they had fallen.


Ahead, figures moved in the dim light. Flaps saw a long coat, and the glowing nozzle of a flamer. The weak light caught on a snarling brass mask.


“Dammit,” he growled, “I’d know that daring fashion statement anywhere! It’s Biscuit Tuesday and the Filthy Rag Gang! Those barrels are ours – get ‘em, boys!” 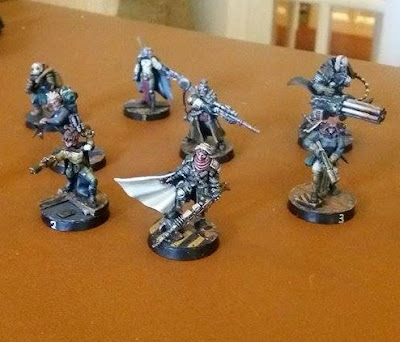 Not content with squabbling over kebabs in the underbelly of Necromunda, the gangs plunged deep into the bowels of the hive to quench their thirst for booty. Here, among the ancient ruins, vicious combat was commenced to see who would walk away with the five barrels that represented treasure (although, given the size of the barrels, they'd be walking away pretty slowly).

The mission was Scenario 2: Scavengers, and we played two house rules: first, rolls of "dead" on the "wounded" chart would be re-rolled, and secondly, the word "scenario" had to be said in the voice of Anthony Hopkins. With these unusual (or, shall we say... "exotic"?) rules in place, we let battle commence.

The fight was swift and savage. Emanuelle Porridge and Keith Violence tore up the left flank, supported by Ned Killy and Pancake Amoeba. Killy grabbed a barrel of loot, presumably thinking it was full of pies, and quickly hauled it back into cover. As mayhem broke out, Algebra Flaps took careful aim with his bolter and shot down Biscuit Tuesday, finally taking revenge for the indignity of being set on fire outside a kebab stand.

The Filthy Rag gang put up a fierce fight, using the ruins in the centre of the board as a bastion from which to rain fire on their enemies.Twice Warbastard was felled by gunfire, but twice the indomitable point-sink staggered upright and opened fire with his heavy stubber to deadly effect. 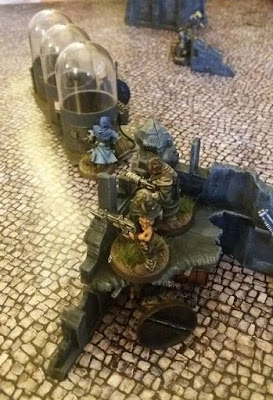 Meanwhile, the fearsome combo of Frogman Stunt and Clam Tickler got to work on the right flank. Although their fire was as lethal as ever (ie not very lethal at all), Stunt was felled by that legend of the underworld, Jerk Manpassion of the Filthy Rags. Try as they might, they just couldn't get the treasure. 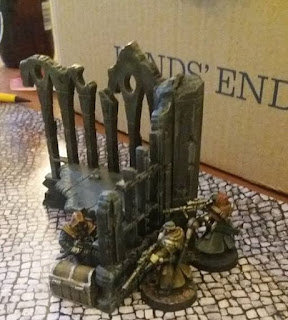 But the furious shooting of the Terror Bird Cavalry for once paid off. The Filthy Rag Gang quit the field with one piece of loot, perhaps realising that the barrels really weren't worth the hassle. Cackling evilly, Algebra Flaps and his cronies returned to their lair with their very own barrel, to celebrate.


The gangs seem pretty equally matched. While the Oily Rags have slightly better equipment, I get the feeling that the Terror Bird Cavalry have been luckier in the skills that they've acquired. Man of the match (although he appears to be a robot rather than a man, but never mind) was Warbastard, who for once actually achieved something.

Your batreps are cool Toby. I like your writing style and witty banter a lot...keep'em comin!