Here is another Necromundan citizen. I've decided that the last of the stalls will be a robot repair booth, where you can bring your broken robots (or servitors, if you prefer) to have them bolted back together. The stall will need a vendor, and who better to run a robot-mending business than a robot? How could that possibly go wrong?

So here is Magister Manus, the helpful robot, who in no way closely resembles Codsworth the robot butler from Fallout 4. His head was made out of several lights cut from terrain pieces. His arms and the trailing cable were taken from Dark Eldar kits, and the main body is, I think, a Fantasy Battle lantern. I used a base from the game Sedition Wars, because it had a cog-like symbol that reminded me of the vault doors from Fallout. 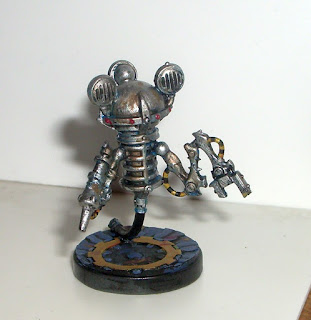 Getting the dirty metal effect was quite difficult. Some of it was painted on, and other bits were achieved with the ever-useful Army Painter strongtone wash. I remembered to check, and yes, he will fit in the stall (phew). 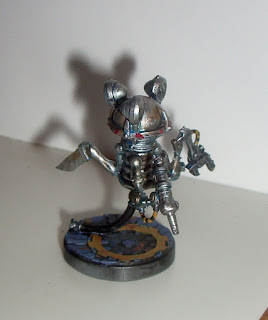