So, the frantic painting is winding down a bit as other real-life things take precedence. I've still got a shop to do for Necromunda, but in the meantime I was able to finish off a model that I started ages ago. I'm not sure what he is: presumably some sort of worker in a protective suit, or perhaps a gangster who has stolen a metal suit and is using it as armour. 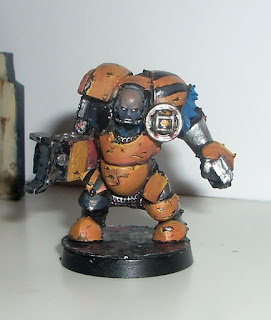 He's basically a fantasy orc in heavy armour with the front half of a space marine's head stuck on the end of his neck. I really like these orc models: the armour looks sophisticated enough for space but still lumpy and crude. The right arm/pincer is a piece of tech from an old building set.


I'm pleased with this model because I like the yellow and the chipping has come out quite well. Out of interest, the yellow was painted with a base coat of dark flesh tone, which is a terracotta colour. I then worked it up to a lighter shade, adding successively larger amounts of bright yellow.

Now, on with the robot repair shop!