So, given the preference for Necromunda in this blog, here are five good reasons why you ought to head down to the underhive and form a gang. 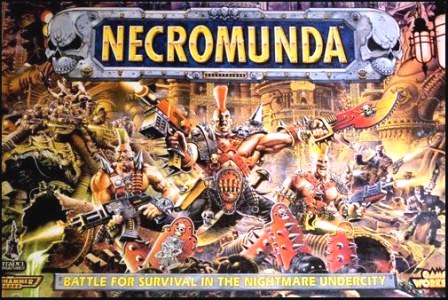 1. The rules are pretty good.
The rules are based on the standard 40k rules, with some extra detail and lots of exciting charts to roll on at the end of the game. They run quite smoothly, especially given their age, and make a decent job of simulating a small-scale shootout where the instinct is to duck rather than to trust your armour and lumber forwards. The post-battle rolls can be a bit arbitrary (I’d recommend re-rolling on the Serious Injury table if you end up dead) but they rarely give you a vast disadvantage. Regarding skill progression, characteristic advances are probably better than skills, but you’ll probably get both pretty soon. A few of the skills are ropey, most are better than nothing, and a few are really desirable. That seems fair to me. My only quibble is that most battles, for all their complex rules, end when someone runs away, so you often just try to demolish each other’s gangs as quickly as possible. I’m also not wholly convinced that the ranking system is a fair way of working out who is winning. But there are other, better, reasons to make a Necromunda gang.


The artwork in the Necromunda rulebook is dominated by John Blanche pictures, but the models and scenery don’t really reflect the usual 40k style. The standard elements of modern 40k – skulls, monks, huge knights and, er, Prussian officers – just aren’t there, which makes for a change. I don’t want to sound as if I’m having a go at people who do like the 40k aesthetic (I quite like it too). There’s some amazing work being done in the grimy-space-gothic style. But, perhaps by accident, it means that Necromunda has its own artistic style, like a cross between Gormenghast and the Fallout games, or perhaps how cyberpunk would look in some run-down, third-world country.


Necromunda offers huge opportunities for conversion. Almost any gang can be represented by almost any model, really: because the stats of all the fighters are so similar, it doesn’t matter if what you’re shooting at looks like a goblin or a robot: chances are, it’s going to do much the same as everyone else. In terms of models, you could go from a realistic band of Walking Dead-type armed survivors to a wildly bizarre bunch of aliens and maniacs. Really, almost anything is viable provided that it’s properly explained to your opponent.


4. Low model count.
No more tedious bulk painting! No more staring in horror at your bank balance (well, slightly less staring, anyhow). Each model in Necromunda is effectively a unit in itself, or a character. That means that even the lowliest juve can be given a lot of attention. The original lead models for Necromunda were a bit static, although perfectly serviceable. But imagine the stuff you could do with a box of Dark Eldar Wytches, or some suitably converted chaos cultists. And anyone who owns a Sisters of Battle army (me, and probably somebody in the States somewhere) knows what it’s like to haul a model case full of lead around. Now you only need 10 guys!

5. You can give your people silly names.

Or, more sensibly, Necromunda can be very immersive if you want it to be. It allows you to follow your little people from green recruits into battle-hardened veterans of Hive City. Even a similar game like Frostgrave doesn't allow you to improve your henchmen very much. Also, the small scale and lack of units as such means that your men can interact with the terrain in a way that Warhammer 40,000 doesn't allow. If you want to make detailed scenery, you're unlikely to get a better chance to put it to good use.

So there you have it. Play Necromunda: if you want a faster (if still complex) wargame with a low model count and a lot of immersion, it's for you. If you want vast armies and huge tanks, it probably isn't.


*
Incidentally, none of the pictures in this post was taken by me or is of models I made. I'm not sure what the formalities on this are: I've included them really to illustrate the article and break up the text, but if ever anyone is bothered by their inclusion, please let me know and I'll take them down. Obviously, I don't own the images or have rights to them.
Posted by Toby at 06:07

I like everything you mentioned about Necromunda, but I just can't stand the "pinning rule". It just sucks the whole enjoyment out of an otherwise flawless game. You can't make a mad dash across no mans land....ever. If you do, your likely to get pinned. And when you attempt to get up the following turn you'll get shot and pinned again....sigh :(

It just eliminates a big part of the tactical aspect of the game. If there's a lot of terrain on the tabletop, then you spend the game skulking in the shadows taking pot shots. If you have a tabletop with a little terrain, then it just becomes one big shooting gallery. Fail on both counts for me.

But, as I said, everything else is ace! The backstory, artwork, character progression etcetera....all good.