Time for some Warp Spiders. The Warp Spiders are one of the odder shines of Eldar aspect warriors (although not as odd as the "weirdly terrifying" Slicing Orbs of Zandros, it seems, who don't have miniatures and only exist on one craftworld). The Spiders use short-range teleporters to appear next to their enemies and shoot them with death spinners, which fire balls of sharp wire and function rather like flamethrowers.

The Warp Spiders were introduced slightly later than the rest of the Eldar aspects, and the models lack some of the style and sense of movement of the others. The models are rather chunky lumps of metal, but then a lot of models of that time were static and hefty, with massive robes and cloaks and suits of armour. They're quite detailed, but the detail isn't very exciting - certainly not as dynamic as Marc Gibbons' cool artwork: 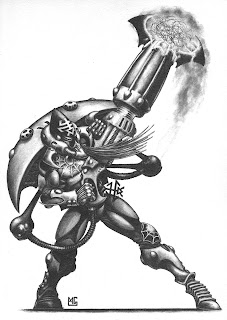 A friend bought me a pot of unusual paint in a sale. It's from the Turbo Dork range from Exit 23 Games, and is meant to be a metallic paint that goes from blue to pinkish-purple, in a very 1980s way. It looks rather weird, and I thought it could add an unearthly look to the Warp Spiders, which would fit their habit of flying through warpspace. I decided to use it quite sparingly.

Otherwise, I went for a traditional colour scheme, incorporating red, black and white. I mounted the models on slightly larger bases than usual, which I found on ebay. This is only because I didn't realise that they were slightly larger than usual until I'd purchased them, but I think they give the models a bit more "space" to stand in. 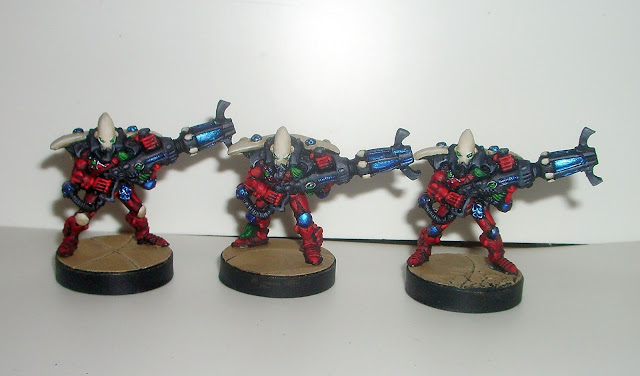 The exarch for the Warp Spiders is much more exciting than the rank and file guys. The big blades on his arms gave me the opportunity to add some more of the Blue Raspberry paint, which came out rather well. 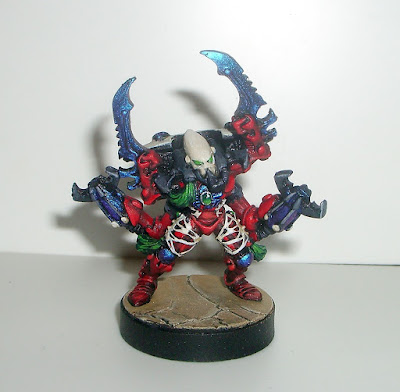 They're clunky models, and they need new sculpts to fit with the rest of the range, but I like the overall result. The sparkly blue and red armour go together quite nicely - by fluke, I should add. Anyhow, they made a good change from painting things light blue!