It was as Doctor Apocalypse had thought: the Brotherhood of the Grisly Truth had captured the pilot from the fallen spaceship and planned to devour her in a hideous ritual. A rescue was necessary.

The cultists left the unfortunate pilot at their base with four guards, while the rest of them went off into the wastelands to fetch supplies, praise Khorne, dress for dinner or do some monstrous combination of all three. The heroes gathered at the edge of the cultists' hideout, checked their weapons and commenced the attack.

The heroes charged in from the south, got the jump on the guards and soon had put three of them down. But a fresh pack of thugs hurried in on the eastern flank. In the crossfire, Maria Poppinata suffered a flesh wound and Captain Fancy was lucky to escape with his epaulettes intact.

Dave put his new gunslinging skills to good effect and blazed a path into the enemy base with twin autopistols. Doctor Apocalypse waded in with a sword, and turned out to be surprisingly lethal for a mad scientist as he dissected two thugs in close combat. At the height of the battle, Doombot X-7 stormed in, bashed one cultist unconscious, shot another and was promptly put out of action in a blaze of gunfire.

The original plan had been to grab the pilot and run off the table with her. As it happened, all the enemy were dead before that was necessary. Instead, the heroes looted the cultists' stash of snacks and beer (popkhorne and Bloodweiser respectively, of course), and headed back to their hovercoaster. As they meditated on their adventure and stuck a new wire in X-7's fusebox, Captain Fancy set a course to the big city.

The hovercoaster set down and the heroes emerged, eager to continue their search for cheap beer and reward money. But even as they left their ship, sinister figures crept out of the shadows to intercept them... 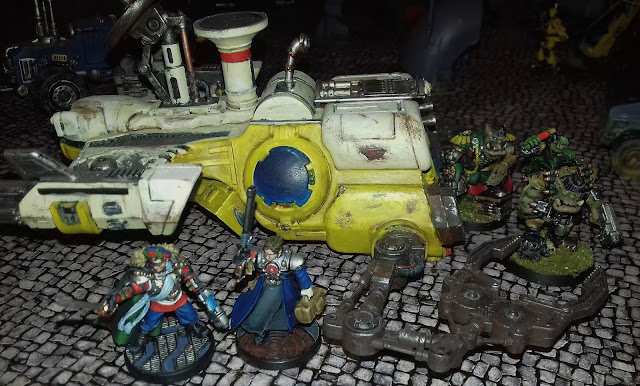 Game 2 was a hard-fought variant on the Hit and Run (Stick Up) mission from the old Necromunda book. It played very smoothly and could have gone either way at any time. X-7 acquired an old battle wound, on account of some circuitry falling out of his head, and the others gained in skill in the usual random way (Dave now has two wounds, for some reason). I'm liking this system. I think some different opponents are called for next time, though...
Posted by Toby at 14:45

I'm really looking forward to the next installment.

1st edition Necromunda is a great campaign game system as I love the fact that even the lowliest Juve could become a proper badass if they survived long enough. There's tons of official and fan supplements to it too which bring in all manner of interesting stuff.

I agree - the character advancements (and injuries) are some of the best things about Necromunda, which is why I've been adding them every battle. They go a long way to making the gangers into characters.

I'm quite impressed at how even the games have gone so far, too. It's clearly quite well-balanced.