So, I've finally come to the last four of the Warlord Games samurai heroes.

First up, we've got a ninja and a female samurai. The ninja is assembled as per usual. For the female samurai, I cut off the banner she was holding and replaced it with a blade from a skaven. It's the right shape, but a bit hefty. Never mind. Apparently, such weapons were standard among female samurai, owing to the longer reach. I also cut her head off and turned it to a better angle. Then I ordered another of the same miniature off Ebay. 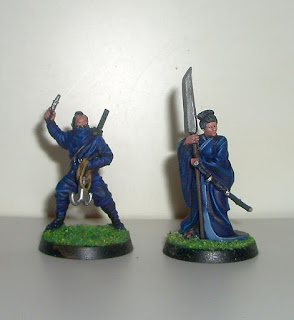 Next up were the last two: an archer and the unconverted version of the lady holding a banner. I'm pleased with the heraldic design on the banner, which is the same as the design on the samurai with the blue coat. 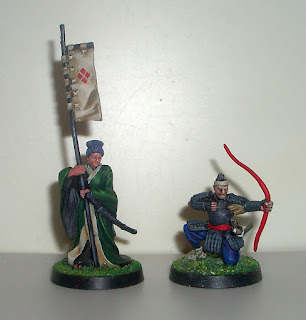 And finally, here's a group shot of them all, about to have an adventure. To begin with, I had thought that they weren't great miniatures, but I've really warmed to them in the course of the project. I'm quite tempted to get some of Warlord's ninjas, but I've got far too much to paint already.

Thanks! I like the models a lot more than I first thought. It's a shame that Warlord have stopped selling a lot of their samurai range. I'm tempted by their ninjas, but I've really got enough to be getting on with...