I've had the pieces of this model knocking around for ages, and this week I thought I'd take the opportunity to finally put it together.

The basis of this model was a chaos terminator torso and space wolf legs and arms. As the commander of the army, he needed to be sufficiently huge. I felt that assembling the model as usual made him feel a little bit stumpy, especially with his cloak heaped onto his back.

I've never really liked space marines, power fists or making space marines even bigger, so I decided, logically, to give my space marine a power fist and make him bigger. In fairness, I gave him my favourite power fist, which I took from an old metal chaos marine champion. It's hard to see the details here, but they come out better later. I was pleased that it fitted his plastic arm so well. 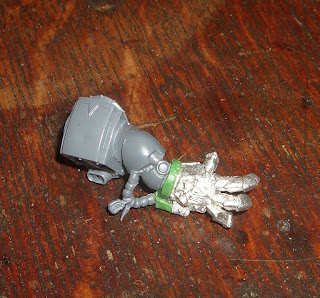 The legs were "chaosified" a little with green stuff. I still haven't got the hang of this and my additions feel rather blobby to me, but they'll do. 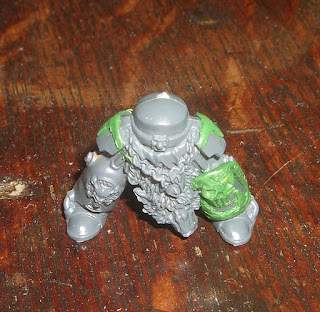 To make him less stumpy, I added thin bits of plasticard under his soles. I also cut the ball-joint at the top of his legs and put another piece of plasticard under it, to raise it slightly and lengthen his torso for a bit of extra height (being big is clearly an important sign of status in the 40k world, along with wearing no helmet or wearing a really fancy hat).

The left arm was surprisingly fiddly, as it was supposed to hold a shield. He got a space wolf axe and a fist from an old orc big 'un. It looks suitably clunky. I added spikes to the left shoulder pad to balance out the cloak a bit and sculpted green stuff so it looked as if they'd burst through his armour. His head came from the space wolf terminators. 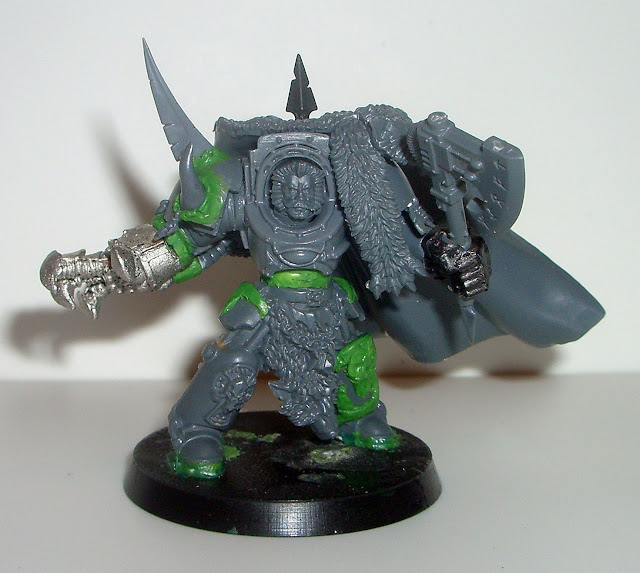 Now time for some paint. I painted him pretty much as I've done the rest of the chaos marines, except that I made his face a little more human than the other marines, by mixing in some blue-grey with the skin colour. I found an Imperial eagle to go on his base. I'm not sure about the freehand on his cloak, but it's the best I can do. 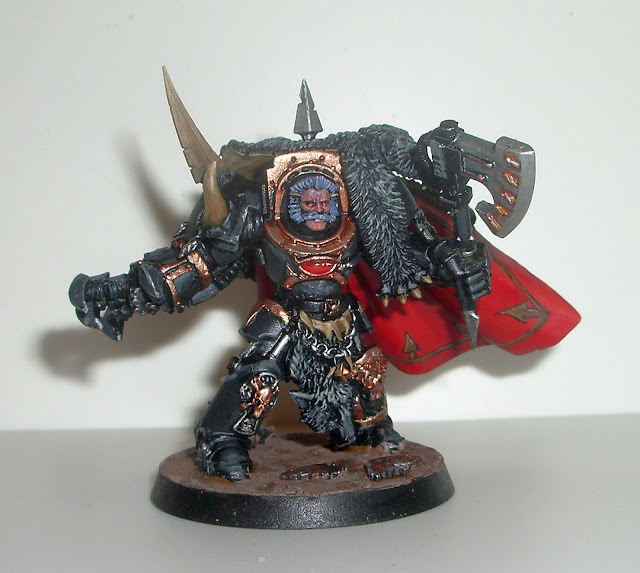 Wulfrid Hammerssen was once a loyal captain of the Space Wolves. After winning his spurs at the Purging of Scapulon, he joined the war-host that Logan Grimnar sent to assist the Imperium during the First War For Armageddon. Here, Wulfrid and his squad led PDF soldiers and guardsmen against the chaos cult known as the Red Arterial Spray, routing the enemy completely.

At the end of the war, however, the Inquisition decided that too much of the population had been exposed to the corruption of chaos. The people of Armageddon, including those who had fought alongside the Space Wolves, were to be deported and killed, and the Wolves themselves were to be mind-wiped.

Enraged by this betrayal, Wulfrid gathered four ships, filled them with as many citizens as he could manage, and set a course away from the planet. Cursing the Inquisition, the Administratum and the whole Imperium, Wulfrid headed into the depths of space.

Since then, he has found new allies. His ships, along with smaller vessels captured over the decades, continue to haunt the space lanes, preying on Imperial and renegade craft alike. The descendants of those he rescued still fight alongside him. Any he captures are offered the choice of freedom from the diktats of the Imperium, or a swift trip out of the airlock. Inevitably, Wulfrid's war against the servants of the Emperor has drawn the interest of the Chaos gods, and he has found himself with some powerful, but dangerous, additions to his horde.

Wulfrid the Turncoat, as he is now known, continues to plague the forces of order. For a long while, he was content to be one of many small thorns in the Imperium's side - but now that chaos is resurgent, he has found new opportunities to spread his own savage brand of freedom far and wide.
Posted by Toby at 05:44

Thanks! I've finally got round to making this model!