Making An Outpost For Necromunda 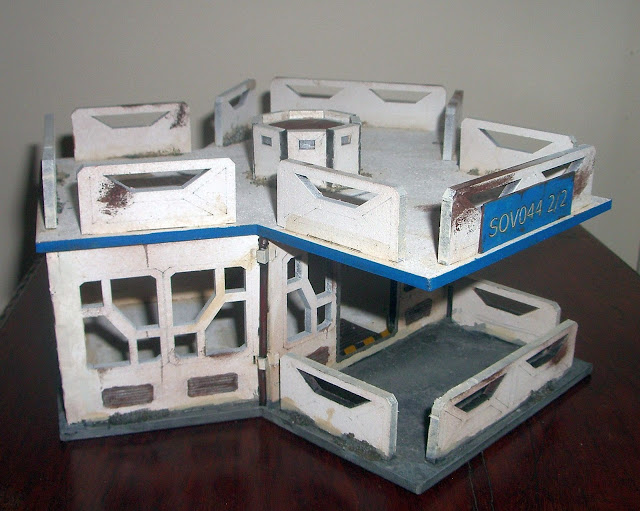 Over the last week, I've been building a new outpost for my futuristic town. This model was based on a "tri building", from TT Combat, which cost £9 and was from a range designed for Infinity.

The TT Combat buildings are really just MDF boxes, with greyboard to provide some detail. Compared to a lot of other companies, they're cheap but crude, but they do give you the opportunity to customise your MDF box as you see fit and make as much of a project of it as you like. For this model, I added some DAS putty to the corners, where the pieces of MDF met, to hide the joins. I also used the sticks from cotton buds to make some drainpipe-type tubes to hide some gaps. A bit of basing dirt was used for grit and muck on the bottom of the building and on the roof, to suggest dilapidation. I also glued a couple of suitably distressed Warhammer 40k newpapers to the roof, to look like discarded newsheets. These used to be available for download and printing from the 40k website. I also made a roof hatch out of plasticard (keeping the hatch pretty flat so that models could still stand on it). 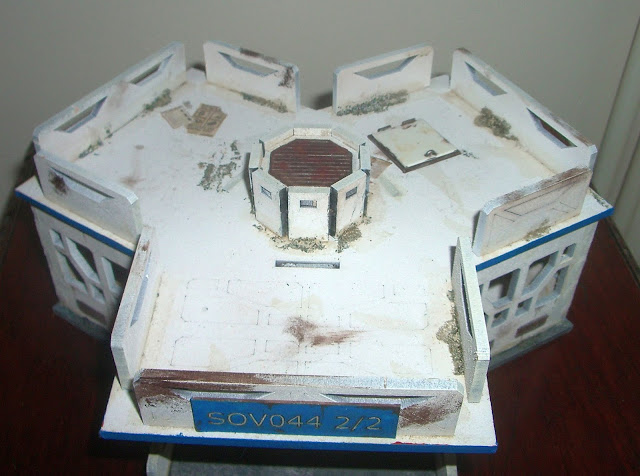 The sign above the door was a complete fluke. The greyboard parts of TT Combat kits come on a sheet, from which you cut them as needed. Often, the sheets have what must be a reference number printed on them. I always keep these bits (sad, I know) because they make interesting details when stuck to model buildings. In this case, I trimmed the number down to size and mounted it above the door. Goodness knows what it means, but since it's not very catchy, I expect that it's a reference number for this particular building. Perhaps it's a research outpost in some miserable Soviet-type empire.

The inside of the building was a bit bland. There wasn't much room to put any posters up, but I stuck a metal grille to the floor just inside the doorway (another bit of unused greyboard from a TT Combat Japanese shop). I cut a piece of random 40k tech down to size and mounted it on the wall opposite the door, with some other bits of cotton bud to "power" it. I don't know what it does, but it looks viable. In true Necromunda tradition, the doorway got some warning stripes. 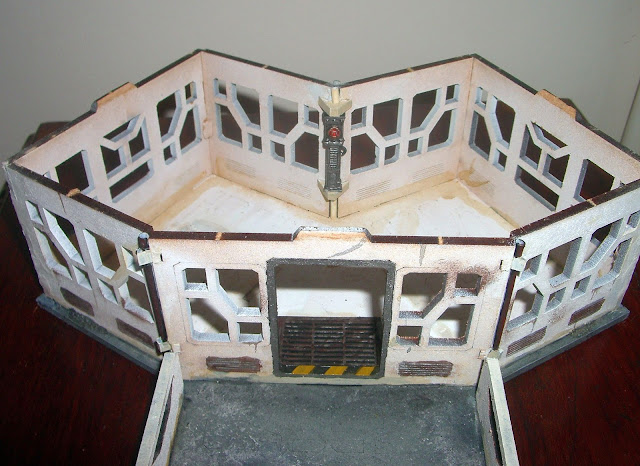 There comes a point with terrain where you have to trade realism against usability. I wanted to keep the inside pretty empty, so that models could fit in and furniture could be added and removed as necessary (I imagine that the models overturn the tables to fire out of the windows). I had some Mantic desks and bookshelves already painted, which would suit it fine. 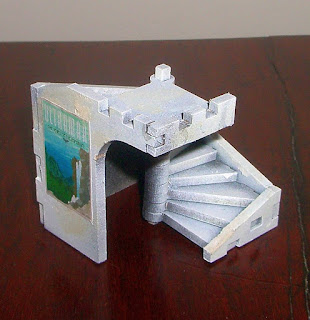 However, in the bits box, I found an MDF staircase that I bought ages ago at a random wargames show. I'd originally planned to use it in fantasy, but with a spray of white paint and another 40k poster, it looked pretty good for this model. Like the furniture, I don't plan to glue it in, so that it can be removed for access. Here's the furnished version: 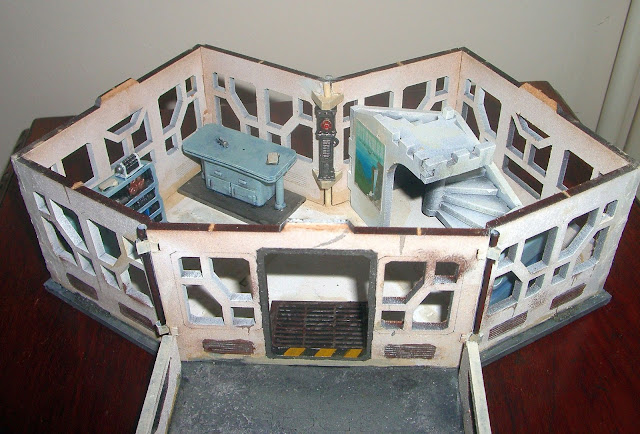 Painting was reasonably simple: white spray with bone and rust colours sponged on top to represent wear and tear. I did some detailing in blue, mainly for variety. And that's about it, really! There's more that I could do, but for now, I think it's fine. 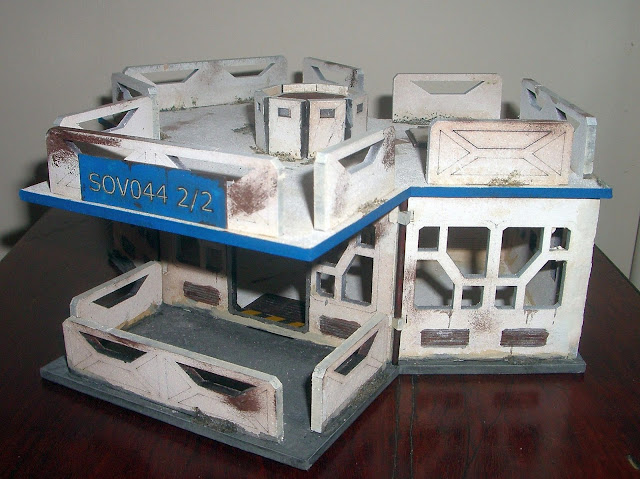 Very nice too. The cotton bud downpipes are an inspired addition - not only to they conceal some of the MDF construction, but they give a nice layer of detail that isn't just another set of squared off angles. You can't beat a nice bit of sponge weathering on a building either!

Nice work on the building!

Definitely appreciate the building and I like that the stairs are modular / removable.

On a scale of 1 to 10 (will do never again to will do again) how much did you enjoy actually building and painting?

MDF has always seemed a bit... offputting... to me for some reason.

Thanks guys! To answer your question, Biess, I'd say about 7. It's well worth doing, but I think to get a simple MDF building to look ok (especially if you're painting it a lighter colour) you do need to put some extra work in. I enjoyed doing it, but if you don't, it might defeat the object of getting a cheap building instead of a more complex kit.

I do like the challenge of adding extra detail, and I think it's the detail itself that makes the model. After all, you're pretty much starting with a wooden box. I'd definitely do it again, but it is a reasonably-sized project.

Sponge weathering for the win!

Sweet you are going to have a splendid variety of terrain for your sci-fi games soon!