I've made progress on the big chap. I've ordered a base for him - it's going to be a marsh theme - and I've attached the arms (left over from the maggoth kit) and commenced painting. So far, I've used a mixture of nasty green-brown washes. I'll have to add the details the usual way. I'm not sure whether the skin looks good so far or whether it just looks as if it needs more paint.

It's interesting how much more detail there is in the Nurgle parts than the tyranid bits. I really like the tyranids, but I find the models a bit low in detail and rather uninspiring. A tyranid hive that's eaten a lot of chaos people could be really interesting, though. 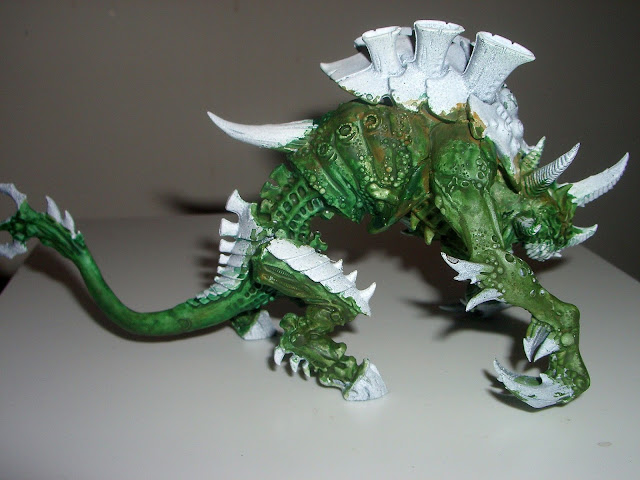 And then this guy. I had a load of bits left over from the maggoth, so I thought I'd have a go at putting them together and making a sort of mouth on legs, together with a rider.

I've always been in two minds about Nurgle. Some of the design aspects I really like: in particular, the organic shapes in the war machines and the worn-out, patched-up armour. I'm less sold on the smiley faces and the dangling guts. 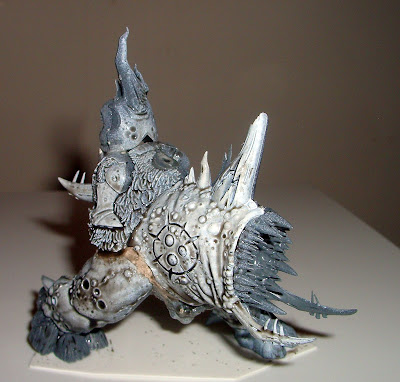 This thing is basically maggoth parts blended together with DAS clay. I gave it a quick wash of dark tone to bring out the shading, which will be useful when I paint it. I think the rider is some kind of rancid knight, so it makes sense to put some rust on his armour. I could see him wielding a lance, or perhaps a long-barrelled flamethrower-type gun.

So much for finishing things!