Riding About On A Huge Green Blob


This week, I finished off the Nurgle rider chap.

Bubo Flense was once a great champion of the plague god, destined for daemonhood. However, after slaying the Slaaneshi warlord Arstermath the Insatiable, he wiped his shield clean to better display his heraldry. This arrogant display of cleanliness displeased Nurgle, and Bubo found himself demoted. He now acts as the bodyguard to the former governor - which, given that the governor is a jabbering idiot who makes a chaos spawn look like Oscar Wilde, is something of a demotion. 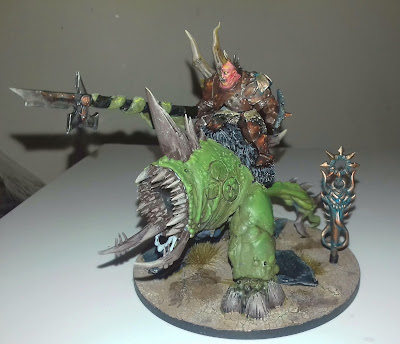 I can't help but feel I ought to have included some black and white checks in there, for the old-school look. Here is a delightful rear view, demonstrating Nurgle's tendency for impressively-sized rumps. I added a bag from an ogre model to the knight, partly to bulk out the saddle (he did look like he might just slide backward, onto the ground) and partly because it looked like the sort of manky thing that he might carry around, full of skulls and phlegm. 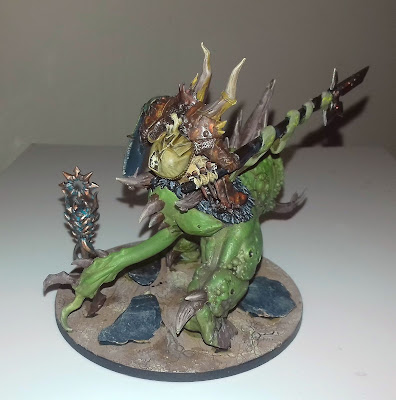 And from the side... 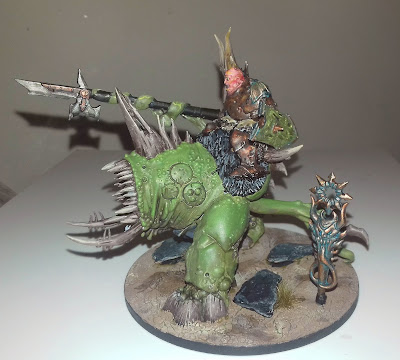 I think the misshapen feel of the creature that he's riding, the almost squig-like proportions, work well for chaos. I'm sure our old friend Hieronymus Bosch had some similar creature in one of his pictures. I had a look at the Chaos 40k book recently, and I was rather disappointed that, apart from chaos spawn, there isn't an option for generic mutated demons. Fantasy Battle used to have general chaos raiders: they looked like Vikings, but could be almost anything. 40k gives less option to go wild and make a tide of man-size weirdies.


Ironically, the random bit of chaos signage (thanks James) is probably the best-painted aspect of it all. Anyhow, with brilliant timing, two models came through from a small Kickstarter that I'd followed which would be perfect for the latest Necromunda gang. Oh well!
Posted by Toby at 03:52