The Gang's Nearly All Here

The not-Esher gang is almost there. I've made two more gangers, taking the total to nine. All that's left is the leader.

The juve on the right was based on the Hasslefree Furiosa model, with a new head and right arm, and a bit of green stuff.

The model on the right is a heavy. Status brings reward, and that takes the form of better armour and bigger pieces of rusty metal to stand on. The heavy was a Wrath of Kings model with Dark Eldar arms, a Tempestus Scion gun and putty to bulk out the armour. 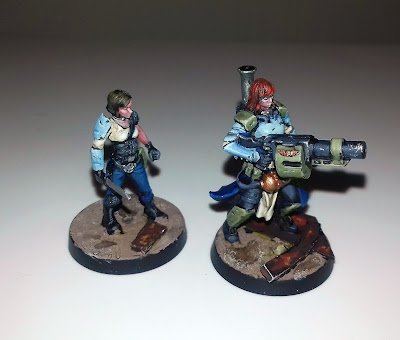 I've also been working on a crashed spaceship (as in painting one, not that my place of work is a damaged rocket). It's a one-piece molded model from one of the old 40k boxed sets, which featured tyranids as the villain of the week. I painted it in the same way as the ship from the last post, adding some tufts of grass. It fits almost exactly with the drab battlefield mats I got off Warlord Games. Super! 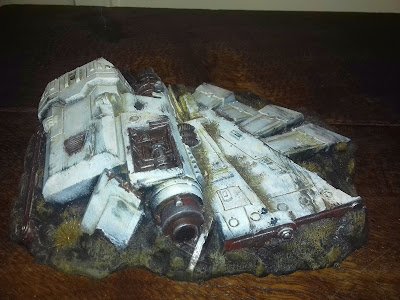 Cracking work on the gangers! The chipped armour is really effective and I can't wait to see the whole gang!

Thanks! They're getting there. I'm just deciding whether it's too ridiculous to have Robot Mary Poppins as their leader.

By the way, are you still working on your rules? I've been doing a skirmish game of my own if you're ever interested in comparing notes.