Once, Varricus Vaughn was a commissar of the Imperial Guard: murderously brutal, tactically incompetent and almost certainly destined for a place on the general staff. Vaughn was appointed to the Necromundan guard, and trusted with keeping order during an outbreak of the zombie plague. One night, after too many glasses of Amasec, Vaughn flew into a rage. Cursing the cowardice of his men and the Astra Militarum's poor grasp of Latin grammar, Vaughn strode off into plague zombie territory, promising to teach the undead a lesson. Wrongly.

Vaughn staggered back two days later, white-skinned and red-eyed. He had not so much lost the plot as thrown the plot in the bin and set the bin on fire. The sentries, used to terrified obedience, allowed Vaughn to enter the compound. In Vaughn's wake there lurched a hundred zombies. When Vaughn broke camp the next morning, the bodies of his former soldiers stumbled behind him.

Since then, Vaughn has carved himself a small empire in the wastes. After defeating the notorious lord of the dead Scrofulus Pump in a close-fought shuffle-off, he won the right to dub himself The Zombie Master, and has been lurking in the wasteland ever since. It is said that he is biding his time, gathering his malodorous minions until he can join forces with the other lords of the undead and dine out on the living in style. 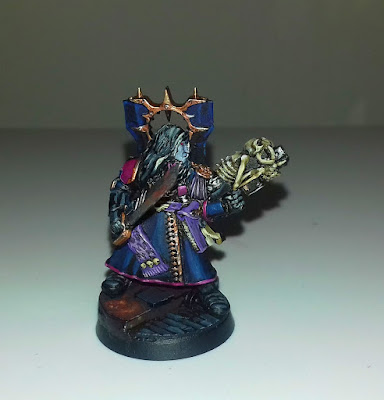 Varricus Vaughn was made out of two-thirds of an old Commissar Yarrick model that I got off ebay for £3. In an attempt to make Vaughn look more like a cartoon vampire and less like a cartoon Nazi, I sliced off the head and replaced it with an elf head. I added the arm from a tempestus scion and made a backpack-thing  from the axe-blade of a Khorne person. He was inspired by a character called Karloth Valois in the Necromunda supplement, Outlanders. 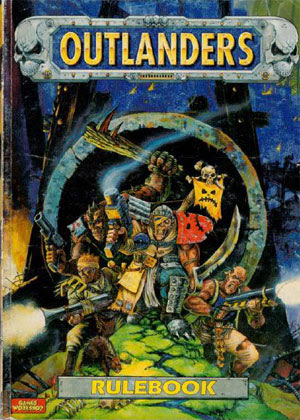 Of all the GW publications I own, the Outlanders supplement for Necromunda is, word for word, probably about the most entertaining. It was written at the height of GW's "gaudy period", where bright red was the colour of choice and a miniature wasn't right until it had some warning stripes. But I shouldn't be too cynical: Outlanders is full of entertaining text and Mark Gibbons' comic-style artwork, and is the closest that GW got to 2000AD.

The rulebook contains rules for outlaws, several crazy new gangs, special characters and (my favourite) a bestiary. I like bestiaries. This one includes some predictable creatures (zombies, giant rats) and some surprises (giant sand clams). It also has rules for some special characters, including Valois himself. I doubt that I'll ever use any of them, but it would be fun to make my own versions of them all.
Posted by Toby at 09:34