Turnip 28: the Root of all Evil

This week, a wargaming friend (hi James) foolishly pointed me towards an article in Wargames Illustrated concerning Turnip 28, a small-scale wargame being created by Max FitzGerald. It consists, basically, of very grubby soldiers in a mixture of Napoleonic and Medieval military outfits fighting in a heap of mud over various forms of tuber. Apparently there will be a full set of rules fairly soon, together with different sides so you can decide which form of vegetable to root for.

I'm not sure whether Turnip 28 is Blanchitsu or a parody of Blanchitsu - certainly, some of the models I've seen look as if they were dipped in a mixture of oil paint, strong tone and mud - but it is entertainingly silly. While the comparisons to John Blanche are inevitable, the muddy, trudging Napoleonic soldiers remind me more of Ian Miller (who once did a book with John Blanche, after all). 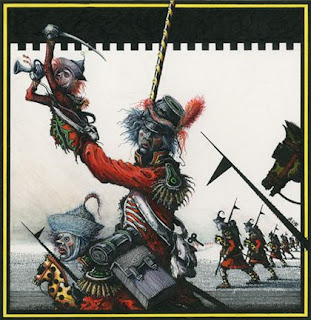 They also remind me somewhat of the guards from the BBC's adaptation of Gormenghast, who wear a mixture of WW1 German and (I think) English Civil War uniforms: they're clearly soldiers, but not from any particular time. There's also a fair bit of Terry Gilliam in the Turnip 28 world, I suspect. 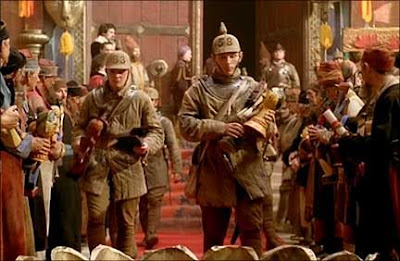 Anyhow, I thought I'd give this sort of thing a go. As seems to be the rules, I used Perry miniatures, along with some bits from old Warlord Games plastic commandos, who are about the same size and style as the Perry models. I also threw in a few bits from the Frostgrave female wizard sprue. I didn't add the customary tufts of... matter to their shoulders, as I don't really like it that much.

Private Hake has turned up to battle in his Y-fronts yet again. Anyone would think that he did it on purpose. 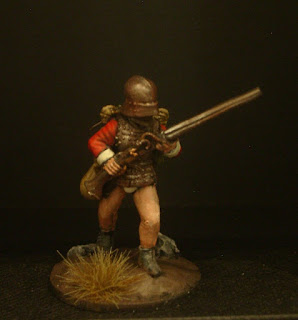 Private Sealford is well-equipped and skilled with his cut-down musket. Unfortunately the impression of competence is somewhat spoiled by the little red flag he wears on his head. 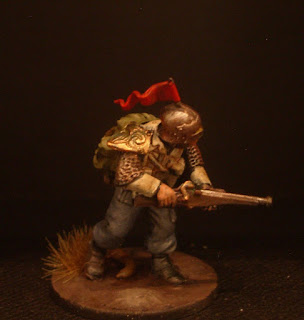 Corporal Ursula Legume directs her men with the help of her puppet, Mrs Glovely. Here we see them having a heated discussion about tactics. 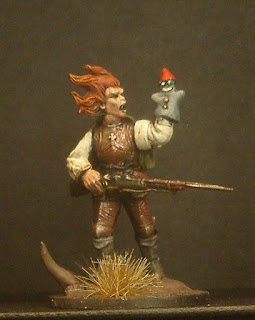 A small point about photos: I am rubbish with cameras. I don't have a very good camera, I take pictures in ropey light, and I find it all rather hard to understand. As a result, most of my pictures are rather washed-out when they're in focus. I tried something different with these guys, taking the pictures in a small black box and using no flash. I've got to say that I'm surprised how "right" the pictures look. I'm not sure if the models look particularly well-painted, but the style suddenly seems about right, which is a surprise!

Email ThisBlogThis!Share to TwitterShare to FacebookShare to Pinterest
Labels: Goodness only knows, Turnip 28

The more I learn about Turnip 28 the more I like it. I've seen a few examples of what people can do for this setting and I find it all fascinating. I love what you did here and how you combined the bits and built a story around each character. Wonderful!

The miniatures and photography worked out really well!

Thanks guys. Growing up with Rogue Trader, I'm used to quite a strong element of black comedy in 40k and Warhammer, and I miss that in some of the more intense, conversion-driven stuff that I see these days. Each to his own, of course, but I like the Terry Gilliam/Mervyn Peake feel that a more tongue-in-cheek approach allows.

I'm really pleased with the photography, which was the result of random experimentation. The black background seems to bring out the colours in a much richer way, which I really like. I might try it for some of my older models, too.

The glove puppet is excellent. Did you make it your self?

I knew you'd like this Toby, well worth mentioning to you. Fantastic work as always, Mrs Glovely is a highlight for me.

Thanks! The glove puppet (and the arm) is on the Frostgrave female wizards sprue. I've no idea what it's meant to represent - maybe the wizard is putting on a puppet show to entertain her minions? It's a really weird little thing but looked suitably silly for this project!