Time for a short break from the Tau, before I start to see only in shades of silver and pale blue. One of the things I like about the 40k Chaos army is that each unit can be quite distinctive from the others. Provided that they all roughly tie together, you can have all sorts of weirdness, which makes painting and converting pretty interesting.

About a year and a half ago, I got some of the new plastic plague marines. Some strange bit of superstition prevented me from painting them while the Coronavirus was raging through the UK. Now I've had my vaccination, or at least the first part of it (that was a fun evening), I decided to give them a go. 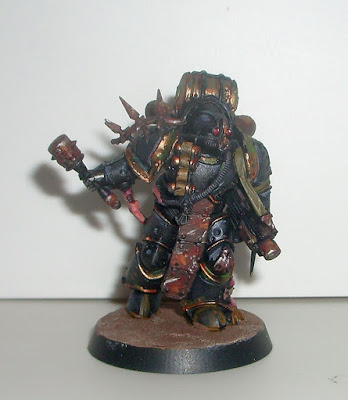 I've complained about the Tau models being poor on detail - the plague marines are the opposite, and you could spend ages painting them. No wonder that they seem to be so popular with expert painters. Some of the details are rather fiddly. I'm not sold on all the tentacles and bits of blobby flesh, but I really like the chunky, battered, almost WW1 aesthetic of their armour. 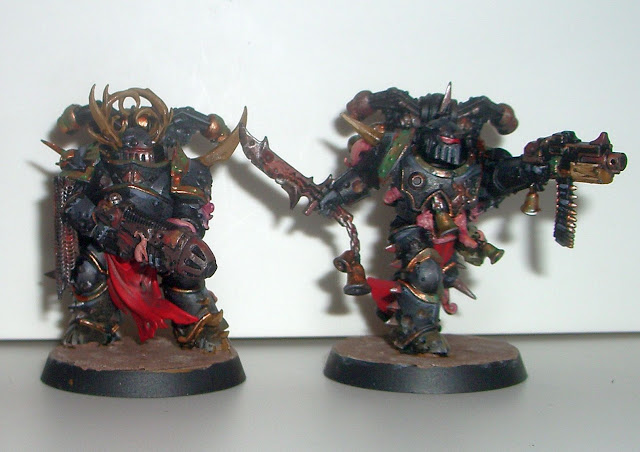 There's not much to say about the painting: I used a dirtier version of my not-quite-Black-Legion colour scheme. The flesh was painted in my usual way: red undercoat, then the usual flesh tones on top, with a purple wash instead of strong tone.

I've not painted many Nurgle models before, but I enjoyed these and I'm pleased with the results. They were a lot less difficult than I'd expected. Personally, I prefer the black colour scheme to the usual greens.

Nice! Seeing these models in different colours than green (or dirty white) is quite refreshing :)