I had some new chaos marine arms and shoulder pads left over, including the super ones with ammunition belts (why are they so cool?). So, I ordered some chaos marine bodies off ebay. Unfortunately, the bodies I ordered weren't standard chaos marines - they were chaos havocs, which as it turns out are much bigger.

Well, it wasn't like that in my day, when all chaos marines were equally tiny. These guys are absolutely huge, bulkier and at least a head taller than their comrades. So what to do with them?

The first thing was to stick the new arms on them, because they looked bloody cool. I assembled four of them, using some spare backpacks and heads, and realised that they looked rather suited to each of the chaos powers. So, to represent their status as respected champions, they got appropriately coloured shoulder pads. Here they are.

Rageface Bloodhandle is a famously brutal champion of Khorne - or at least he would be, if he had left any witnesses to his various acts of carnage. He carries a plasma gun, which may yet be the only thing capable of killing him. 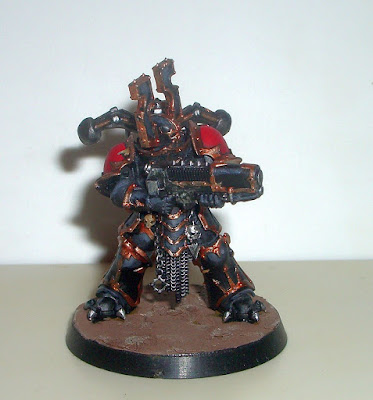 Duke Laytex the Wrong is renowned for his unnatural axe and was the only man left standing after the 120-day storming of Psodom, twinned with Commorragh, about which the less said the better. 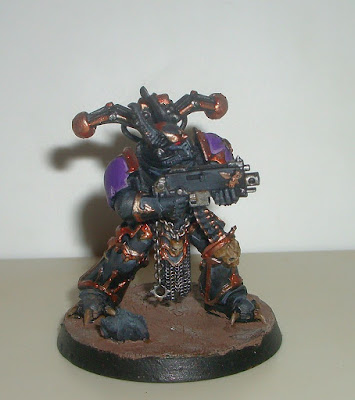 Atrox of the Decrepit Legion has killed thousands of enemies and quite a few allies as well. He now fights in the Black Legion, on condition that he wears a new suit of armour, never takes his helmet off and stands downwind of everyone else. 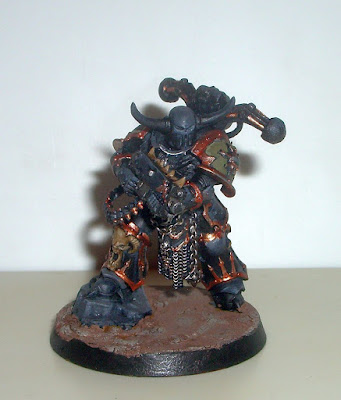 The Amazing Mysterio is a master of mystery and an expert reader of the Imperial Tarot. Thanks to his modified bolter, most of the cards seem to be "Death", and the tall dark stranger his enemies meet is, unfortunately, him. 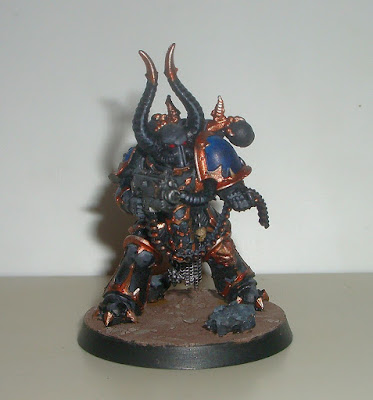 So what to do with these guys? Well, I thought they might make quite good terminators, actually. Ok, the weaponry is wrong, but I imagine that the powers of chaos (and their awesome ammo belts) would give them the equivalent of storm bolters, and as for close combat weapons, well, I guess that's just magic. I like the big havoc models a lot more than the terminator bodies, and they're certainly large enough.

I must admit I do like the more realistic proportions on the newer GW power armoured figures and you've created some really nice conversions to boot!

I've never been into the whole "making marines bigger" thing, but I do like the way these guys have come out. To be honest, a lot of it comes from the parts being really well sculpted. Did I mention that I really like the ammo belts?

Oh, wow, I really like the poses. Magnificent work on these!

Thanks - given that I bought the wrong bodies by mistake, I think they've turned out well!