A Random Bounty Hunter - back to converting!

I've been painting quite a lot of miniatures of late without converting them very much. I thought I'd make a random model out of bits and pieces, mainly because I was starting to miss cutting models up. Which makes me sound like Jack the Ripper, but let's not dwell on that.

A long time ago I bought a packet of plastic Malifaux sharpshooters. They were a very different scale to anything else I owned, and so I didn't do anything much with them. I dug out one of the bodies and used it as the basis for a new model.

The arms came from plastic Delaque models from Necromunda. Both arms were raised over the model's head, which looked a bit odd, so I tried to lower one of them. In the end, I had to cut the left arm from the elbow to the shoulder, attach it with a bit of wire and sculpt a sleeve around it. The toe of one of the model's boots had to be cut and replaced with green stuff to make it fit on the base.

The head was from a Frostgrave female wizards sprue. The base came from the Khorgorath model that I used to make my model of Throgg the Troll King a few months ago. I put some bits and pieces on the model's back to balance her out a bit, including a wood elf knife and a rucksack from a Bolt Action sprue. 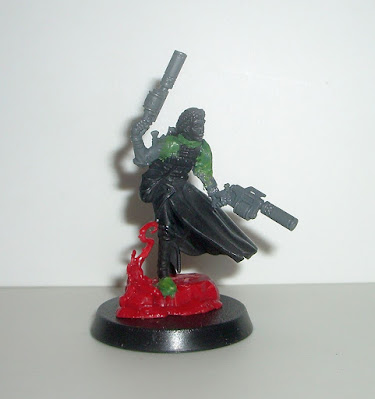 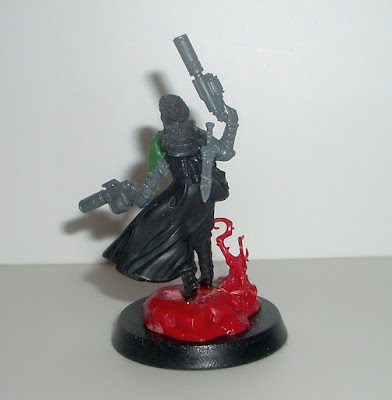 There's not all that much to say about the painting. I used a blue colour for the coat, partly because it looked quite military and partly because I wanted a striking colour. Together with her red necktie, she looks a bit Wild West. I'm very pleased to have been able to dot in the eyes!

It is well known that the galaxy is overrun by bounty hunters. During the last years of his rule, the Governor decided to rid himself of bounty hunters by hiring bounty hunters to get rid of them. Shortly afterwards, the bounty wars began and the Governor was declared insane and deposed. Here we see Lucilla Lux, former Imperial Guard officer, creeping up on her prey. 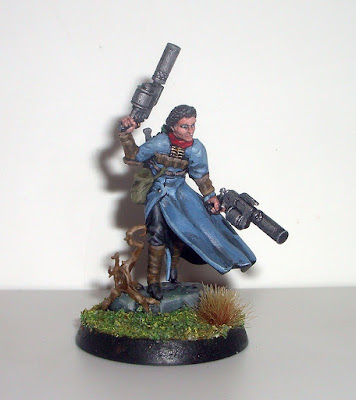 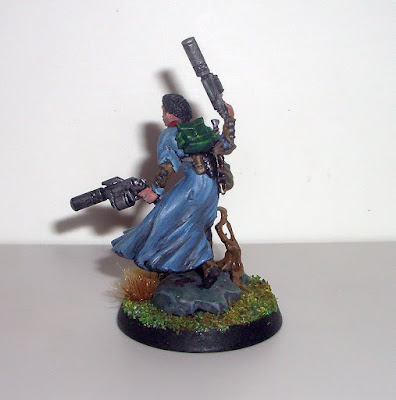 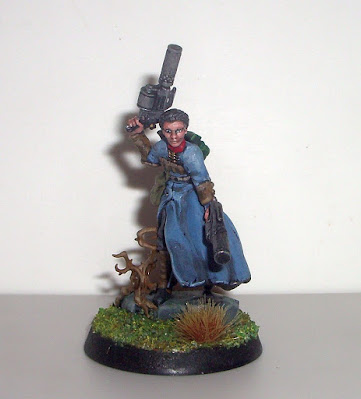 Oh, I love this one! The composition is dynamic and the bits are really well chosen. It looks like a totally original mini, congratulations!

Thanks very much! I really enjoy making new models like this. It's very satisfying to see the different bits of the miniature come together.