Here are some more plague marines for the unit. I've really come to like these models, although goodness knows how I'll store them, given all their horns and spikes, which look extremely breakable. Anyhow, on with the chaos.

These two are unconverted. 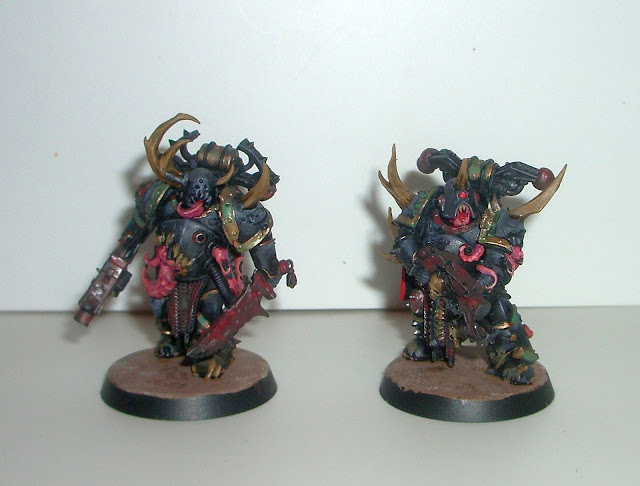 The chap on the right below is as standard. I converted the guy on the left, who is the unit champion, very slightly by replacing his plague knife with a really old plasma gun. It fits in surprisingly well. I did wonder about painting a glow onto the plasma guns, but I thought that the blue I've used on other plasma weapons in the chaos army would look too "clean". 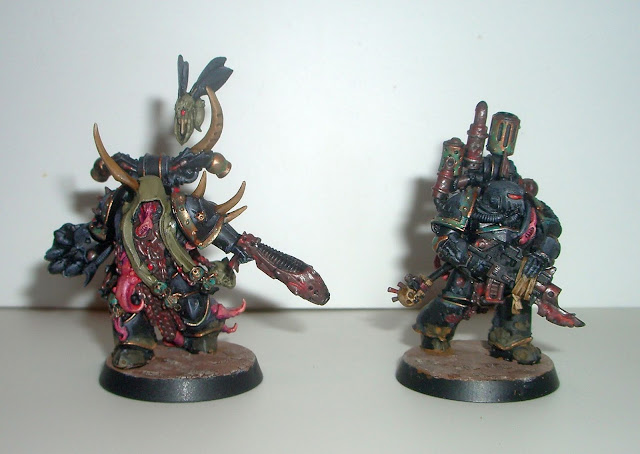 And here's the entire unit, in its seedy glory.

I've now got three more Nurgle marines left: a standard-bearer, a guy with a bolter and a guy with a plasma gun. The problem is that they are older metal models (the bolter guy is in the old blue catalogue from about 1990) and are much smaller and slighter than the rest of the unit. They're also stylistically different, without the big horns and mutations of the newer marines. They will look a bit daft next to their comrades, but I think I'll paint them up anyhow. Perhaps they're mascots, or just haven't accumulated enough diseases yet.

Nicely done, just as the previous ones. Right, storage is going to be definitely an issue... XD

Cheers! I've ordered another miniatures case, but I'm not sure whether the Nurgle guys will fit into it!

Oh, these are superb! I like the fact that the colours differ a lot from the classic Nurgle theme. Still very infectuous!