Many years ago, I bought a box of Fire Warriors, the standard Tau troops. I thought I'd go back to them as part of the current project and make them a bit more suited to the flying saucer look.

There's a reoccurring theme on this blog of me blaming my tools when models go wrong, and I'm going to do that now. The Fire Warriors are not very well cast, and the sculpting could be more crisp, so that it's quite hard to work out what some of the details are. The legs are particularly weird, especially the little hooves at the bottom. I've never figured out why the Tau, as a technologically-advanced species, seem to be effectively going barefoot. Wouldn't they wear little booties on their hooves?

Anyhow, the sculpts might have been improved since I bought these models about 10 years ago (the pathfinder set is way better) but these are old models and frankly aren't the best.

I made three changes to the models. First, I left off the big left-arm shoulder pads, which look too much like samurai armour and not sleek enough for the style I wanted. Secondly, I felt that the backpacks were a bit too big for the 1950s look, so I took them off and replaced them with what I think are grenade packs from the Fire Warrior sprue. Here's a shot of a Fire Warrior's bum to show what I mean: 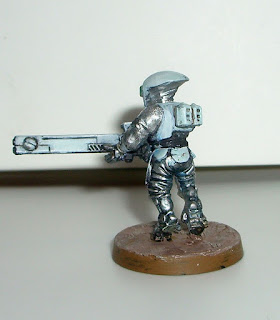 The other change was to cut off the lenses from the helmets and use green stuff to make them smooth. Then, two large eye-lenses were sculpted on with more green stuff, in imitation of the classic saucer-people look. I imagine the Tau wear these helmets to help them look less intimidating to the various cows and farmers they abduct in the name of science. I painted the lenses green and gave them a coat of gloss varnish to finish the look off.

Prepare to be enlightened, puny humans!

The eyes are really original, I love your take on these. Besides, removing the shoulderpad helps enormously to make them look better. Nicely done.

Cheers guys. They're never going to be great miniatures, but I'm pleased with the way they've come out. I'm just finishing the second batch!