Minions Past and Future

Two more random models this week - one for Frostgrave, and the other for the Necromunda and the robot factory (or, perhaps, Necronmunda).

This model is a really, really old wizard that I bought some time in the early 1990s. I originally painted him in a rather odd faded-pink colour, which I'm glad to say has now been entirely removed thanks to the alchemy of Dettol. He's a good characterful sculpt, although the detail on the face is rather soft (of which more later). I think he'll make a suitably put-upon apprentice. 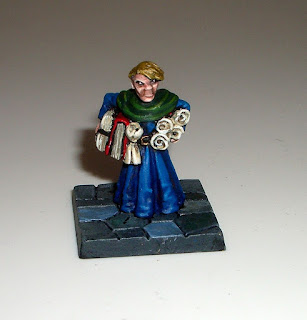 The second model is quite interesting, if you're me (which, unless this is a Philip K Dick novel, you're not). It was in a bag of random metal models that I got cheap off the internet - I find such things hard to resist - and was missing a head. I think it's an adviser made by Pig Iron Miniatures.

To be honest, it's not an amazing sculpt, but I like the concept and the pose. I added a Statuesque Miniatures head,  which I think makes up for the lack of fine detail on the body. As ever, adding a better head really improves an entire model. 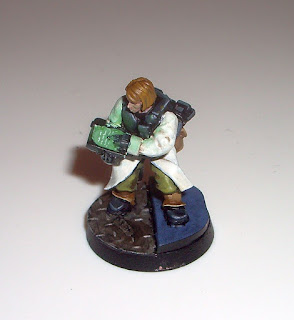 And I attempted some object source lighting! This is a brave new world for me, and not a technique I'd like to use often as it's very tricky. I don't think I made a total pig's ear of it, but it was really hard to do and it still doesn't feel quite right to me. Anyway, onwards.

I have a grand plan. I have bought the Frostgrave manual and a supplement that includes a single-player campaign. My plan is to make a team for it, as well as the monsters, and fight the game on a fully-painted table of scenery. I think this will be rather cool. I've wanted to try solo wargaming for a while, and I've heard good things about Frostgrave's system. We shall see...

It was a normal day in the fine town of Tombstone. Folks were going about their business: working, praying and urinating into the horse trough outside the saloon. 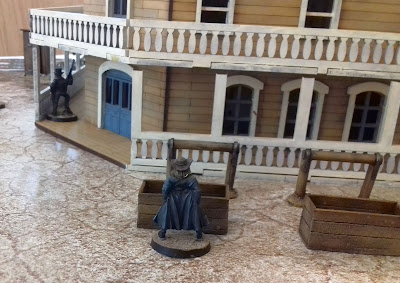 But on the far side of town, where nobody ever goes, three cowboys had found something mighty strange. It looked like a dice, but why in tarnation was it so dang big? 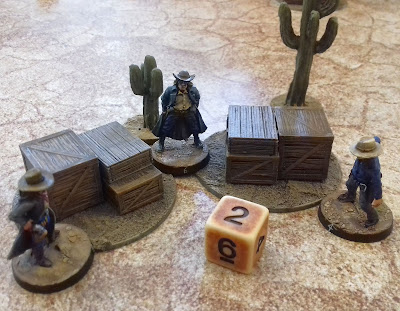 They took it to the smartest folks in Tombstone to find out why. The blacksmith and the undertaker couldn't figure it. Even the schoolma'am, with all her fancy book-learnin', didn't know what to do.

"I'll take a hold of it," the sheriff said, gesturing with his pistol. "Make sure no varmints don't run away with it." 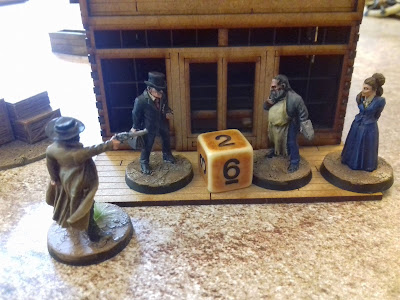 That night, the sheriff woke from a terrible dream. He dreamed that his legs were stuck to the ground, and that huge dice were rolling all around him, like boulders. And then he heard someone moving outside. Someone was creeping up on him.

He waited for the no-good son of a gun to show himself. 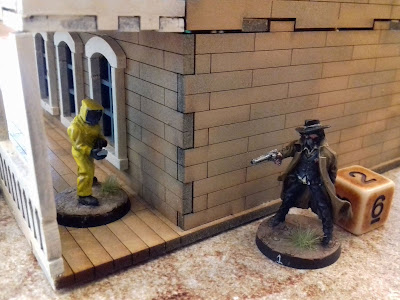 The sheriff leaped out quicker than a rattler on a prairie dog. The stranger was done up like some kind of sailor, all in special cloth, with a hat like he was keepin' bees.

"Don't shoot!" he cried, throwing up his arms. 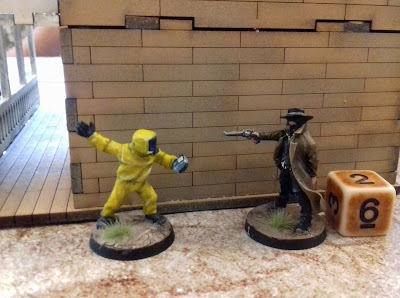 "Huh," said the sheriff. "Seems you're as yeller as your britches, son. Now, tell me what the Sam Heck you're doin' out here, and where this big ol' dice came from."

"The dice come from far away," the man stammered. "But it's a long way from Tombstone."

"Well," said the sheriff, "turns out I can ride pretty well. I'll just fetch my hoss."

Email ThisBlogThis!Share to TwitterShare to FacebookShare to Pinterest
Labels: Crazed Ravings of an Idiot, Wild West

This was an exciting week for me, by my own rather mild standards, because a Kickstarter that I backed ages ago finally arrived. It was for a variety of fantasy and science fiction (SF) terrain from Mantic Games (so I should be glad it turned up this year, I suppose). I'm going to talk about the SF terrain here.

The set is called Starship Scenery and retails for £20 from Mantic*, although I'm sure you could get it cheaper elsewhere. It consists of a range of computers, tables, desks, cryogenic tanks and similar things, all of which would work well on anything from the Starship Enterprise to Aliens. They're not "gothic" and, in 40k terms, would be best suited to the Tau. 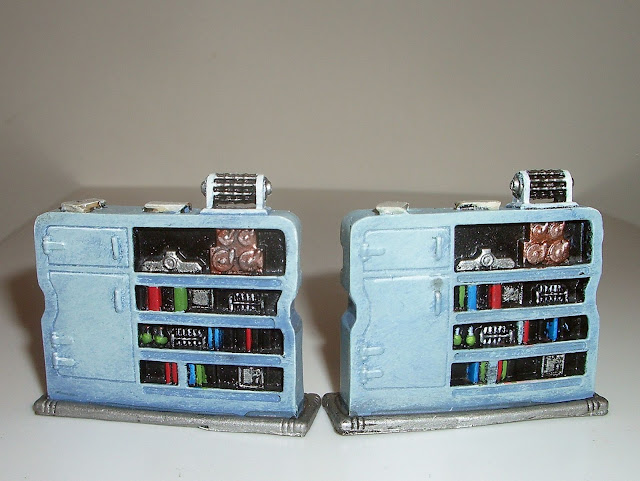 The models are cast in a sort of rubbery plastic, a bit like set PVA glue or that stuff they use for Reaper Bones models. It's more like the stuff Mantic use for their dungeon furniture than the hard plastic used for their dungeon doors or the Walking Dead scenery. It won't shatter if you drop the pieces on the floor, and it holds detail surprisingly well.

However, it warps (at warp speed, I would expect). That's not too much of a problem with fantasy terrain, as a medieval table is likely to be quite rough and ready. But science fiction terrain would presumably be made to precise specifications, and it can look pretty wonky as a result. 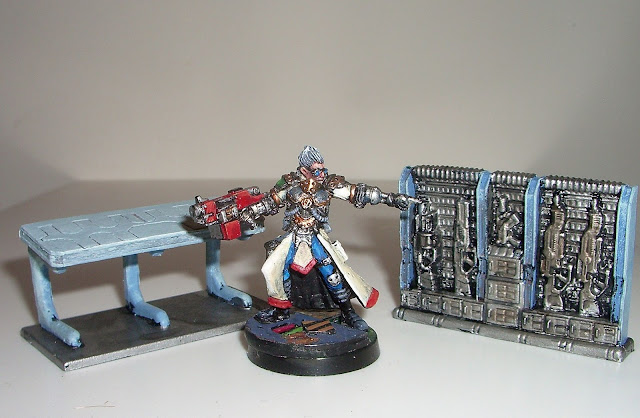 Take the table in the picture above. When I first got it, the legs were all over the place and it looked as if it was tripping over while doing the Can-Can. Not good. I had to glue the legs to a base to keep them all in the right place. The gun rack on the right, however, is one solid lump and came out very well indeed (although I need to paint it a bit more).

What this means is that you're going to have to do a bit of rescue work but, once you have, you'll have a very decent product indeed. I gave the desks here a fairly quick and crude painting, and I think they've come out reasonably well. 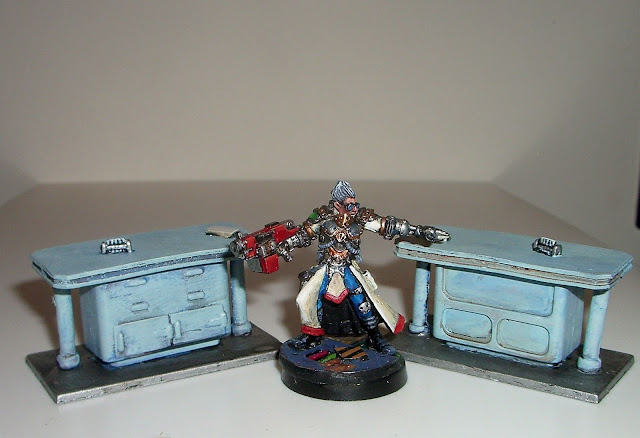 So would I recommend this set? Yes, but be prepared to do some extra bending and sticking. I am impressed by the sculpting and durability of these models. I had to slice a few mold lines down. Otherwise, the main problem was the warping. Overall, 7.5 out of 10.

The Entrance to the Robot Factory


Deep in the wasteland, there is a factory. Once it produced all kinds of useful and wonderous goods for the Governor and his minions. But now it lies still, a mere ruin of its former self. At least, that's what it does in the daytime...

Behold the gateway to the kingdom, the lair of Lord Mechatep of Pskainet. To paraphrase Dante, abandon hope all ye who enter here, unless you're a robot, in which case get ready to have your batteries recharged. 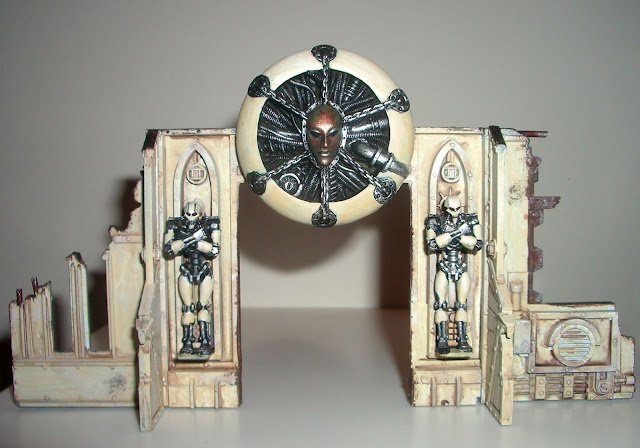 The main architecture of the gates comes from the 40k Manufactorium and Basilica Imperialis kits (I think that's what they're called, anyway). The guards have legs and heads from Necron warriors (repositioned with a lot of faffing around) and upper bodies from the Necron Ghost Ark. The sinister face and surrounding machinery is from a Micro Arts resin base, although I've no idea how you're supposed to mount a model on there.

Here's a picture of the Necron legions marching forth from their lair to do something that probably involves destroying all humans. I'll let you know how they get on. 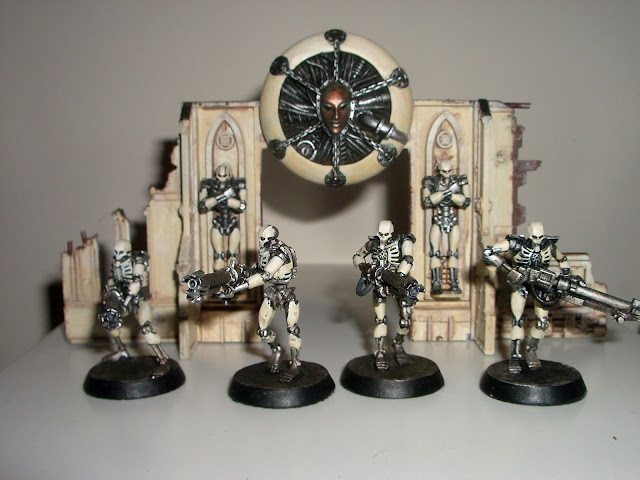