I've been back at the Tau this week, turning an old battlesuit into my version of a heavy support Broadside battlesuit. These carry big railguns or missile pods, and are bulkier than the usual variety. 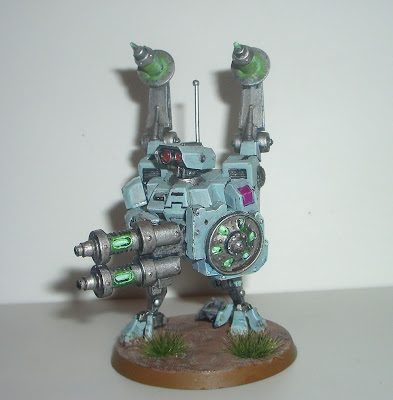 For this, I used part of a Mantic mounted gun (I think it belonged to their space dwarves, but I got it in a sale of random bits so I can't be certain). I used a Fire Warrior backpack and some plasticard to make a side handle for the gun, to connect it to the battlesuit's left arm.

The battlesuit got a new, larger head made from a sighting device from a space marine tank. I'm not sure how 1950s it looks, but it does have the side-effect of making him resemble WALL-E's larger, angrier relation. 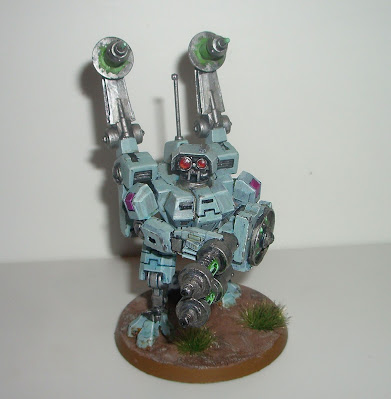 The gun/radar things on his back, which would probably function as missile pods, were converted from the support legs of an old mounted gun that came with one of the terrain kits, probably the plastic bunker. A lot of old sci-fi weapons look rather like radar equipment, so I think the dishes with spikes in the middle work quite well here. 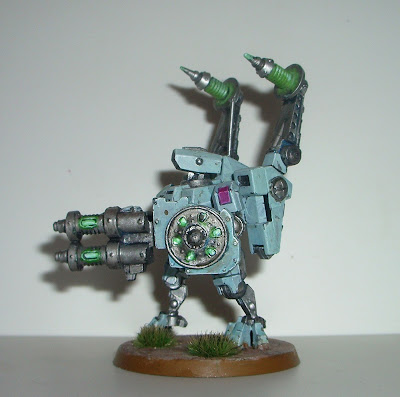 One thing I've discovered about the battlesuits is that their feet make no visual sense. They have no backs to them, rather like a stiletto heel without an actual heel (or a stiletto I suppose), so surely the battlesuit would either walk on tiptoe or continually fire his jetpack thrusters to avoid falling onto his metal arse. What is it with GW and the feet of Tau models?

Anyhow, all that considered, he'll make a nice addition to the small force. I really ought to add something to his base, but I'm not sure what. A 1950s soldier, perhaps, or a sign reading "Area 51"?

The twist you are taking on these Tau guys is pretty interesting. They are obviously recognizable, yet different. I like your work!

Cheers! Part of it is just for the pleasure of changing them and making the rather dated battlesuits look cooler, but I like the flying saucer look and it's nice to have a theme. Some of the old Tau plastics are pretty mediocre, so I don't feel as if I'm going to ruin them by making a few changes!