Keen readers will have noticed that about 60% of this blog is about Warhammer 40,000 in some form or another, usually Necromunda. Even keener readers will have spotted that, up to now, there have been almost no space marines.

I've never really warmed to the marines. Of course, I've got a load, as every 40k player has, but nothing about them really appeals to me. The models don't do a lot for me and the fluff verges on the downright silly (why the hell can they spit acid?). A lot of the time they just seem like a 12-year-old's idea of tough: bald, covered in skulls and really really big. And they don't like girls. Hats off to the writers who can - and do - make credible characters out of them.

Anyway, I decided to make my own marine. My feeling is that if you're going to make a space knight, you ought to go full-on and do just that (I quite like the Space Wolves, because they are so shamelessly Vikings in space). So, I'd want shiny armour, a proper knightly helmet, no skulls and no flared trousers.

I used an Age of Sigmar Stormcast Eternal (aka a Sigmarine) as the basis of the model, and added a terminator's power fist and a storm bolter taken off a vehicle. The head came from a grey knight, and the backpack was a very old chaos backpack, selected because it seemed big enough to balance out the model and not to look like an afterthought. I also puttied over the strange runes on the cloth hanging off his belt. 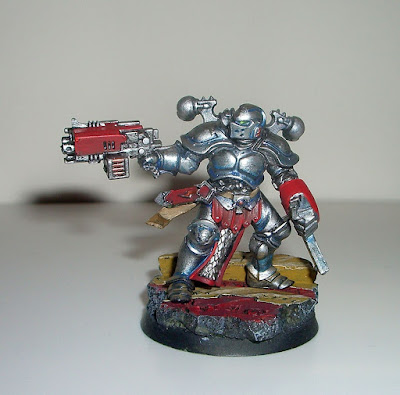 The painting was pretty simple: gunmetal washed with blue and highlighted up to silver, and red highlighted to orange. I used a Micro Art base, painted to (hopefully) resemble marble. 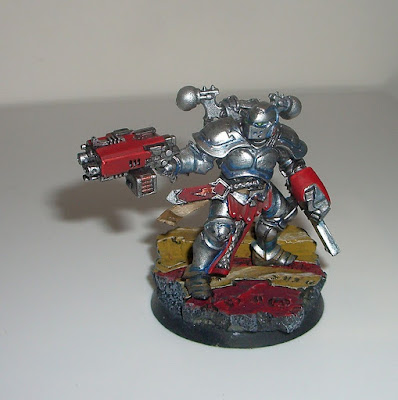 I rather like this guy - I certainly like him a lot more than "proper" space marines. I've got four more Sigmarines, which I think I'll convert in this style. I'd like to do more detail on this chap, especially heraldry, but I like the conversion. I think there could be something in this.
Posted by Toby at 15:37 No comments:

Both are excellent Black Scorpion people from their Wild West range. The chap is clearly a smith, and is a really nice, characterful sculpt. The lady had very large bows on the front of her dress, which I removed. She doesn't have an obvious profession, but she could be a doctor or the local schoolmistress (or she might just be holding two six-shooters behind her back). 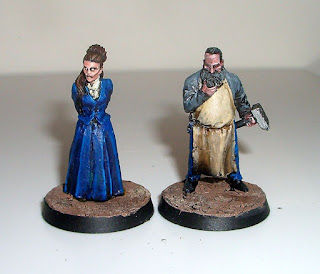 I also started this vehicle. To an extent, it's an attempt to use up some old parts that weren't doing very much. The body and driver come from a Tau Piranha, the wheels were from Ramshackle, and I've no idea who made the tracks. They came off an odd little steampunk tank that I must have bought a decade ago. 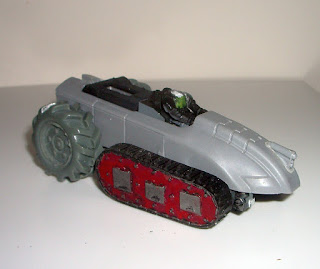 I'm not sure if this will be a vehicle from the Genestealer Cult, or just a civilian off-road thing. If the latter, I'll probably paint it red: if it's from the cult, it will end up a nice shade of blue. All suggestions appreciated!

A Big Bloodletter and Some Genestealer Guys

A lot of miniature companies make demons. I've never found many of them terribly convincing nor, despite the proliferation of spikes and skulls, very sinister. Of all the demon models I've ever seen, only GW's spindly bloodletters and the character model Belakor have ever really seemed sufficiently - well, demonic.

And this thing. I don't know what it is, exactly, because it's from a Spanish game called Sphere Wars, which now seems defunct, and all the writing in the box was in Spanish. But I think we can pretty safely say that it isn't friendly and it isn't nice. I've not done any converting, because it didn't seem necessary as it's a really good sculpt anyhow. 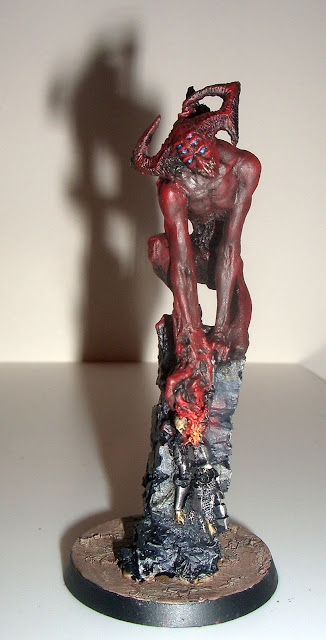 It's a bit hard to make out, but this chap seems to be sucking the life out of a dead knight with his hand. I find the crouched pose far more unsettling than the roaring-and-running-forward pose popular among bloodthirsters of Khorne. I think this is the guy that bloodletters want to be when they grow up. 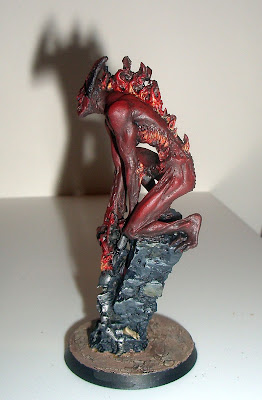 As is always the case with metal miniatures like this, I missed a few bits. But the flames have come out well, and he looks suitably spindly and evil. I wasn't sure about the eyes and I'm still not, but I did want something to draw the eye away from the flames around his hand and up to his face. I might try to shade the muscles a little more, but I'm wary of overdoing it.


Also this week, I got a few more reprobates painted for the genestealer cult. It's a shame they're so useless in the game, because building and converting them is such fun. The chap on the left is an ancient metal Rogue Trader penal legionary with new arms. The middle guy is a plastic chaos cultist with a replacement head. The one on the right is straight out the box. 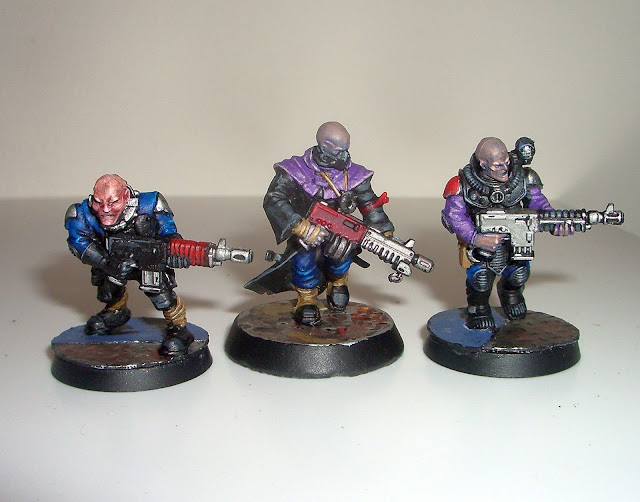 The army of completely useless little men grows ever stronger!
Posted by Toby at 08:53 No comments:

We Have Such Sights To Show You: Urien Rakarth

Urien Rakarth is a special character for the Dark Eldar. Even by Dark Eldar standards, he is unpleasant, being the head torturer and mad scientist in a cabal of torturers and mad scientists. He is one of the very few people in the world of Warhammer 40,000 who is actually smiling, and in the grim darkness of the far future, anyone who doesn't look miserable and angry is very bad news indeed.

The current incarnation of Urien is an odd, multi-limbed, hovering monstrosity, equipped with a sort of tattered lab coat, a lot of syringes and rather sinister dangling little feet. However, I prefer the old metal model, from the first incarnation of Dark Eldar models.

In truth, many of the original metal miniatures were passable at best. I like the metal grotesques/wracks, and the haemonculi were suitably bizarre, but the berserker and soldier aspects of the army were pretty poor. However, Urien (I keep mistyping that as Urine) has stood up rather well. Even though he does look as if he's laughing insanely at a chocolate orange, he really is a bloody good sculpt.

I stripped the old model (removing the sssskin brought me... pleasure) and took off the rest of the paint with a pick. I went for a dark blue with a little bit of green in it for the robes. The... flesh was painted in light blue, washed with grey and brought back up with a pale skin tone, rather like the demons in a certain unrelated film series. 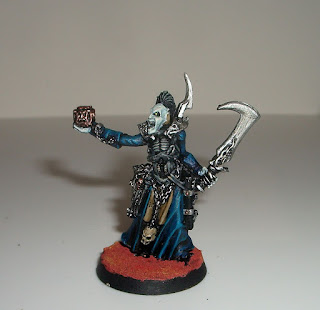 It doesn't "pop" much, as they say, but I think the muted colours rather suit him. I don't really like the whopping great machete/boat-hook he's packing, but I was reluctant to hack the model up. Now he's all set to lead his minions, in exploration of the further regions of experience. Which is nice.

Pleasures of the Flesh (and Dark Eldar)

A fair reading of the background of Warhammer 40,000 is that nearly everyone is, basically, a knob. Virtually nobody deserves to survive. However, for sheer obnoxiousness, the Dark Eldar take the biscuit. They live in an evil city called Commoragh (twined with Psodom, I assume), and spend their time mangling and killing anyone else (and each other) for fun and grow strong by doing so. About the best thing that can be said of them is that they have an equal number of males and females in their armies: they're equal opportunities sadists, even if they are a bunch of dicks.

I bought the boxed game of Gangs of Commoragh . It comes with a shedload of jetbikes and hoverboard-riders, and I thought I'd start with a few bikes.

Here is one of the bikers. They were painted with a sponged-on turquoise that I mixed myself. I cut off a couple of spikes to help with storage, but otherwise, they're pretty much made as intended. While the paintjobs aren't amazing, they look pretty decent on the table. 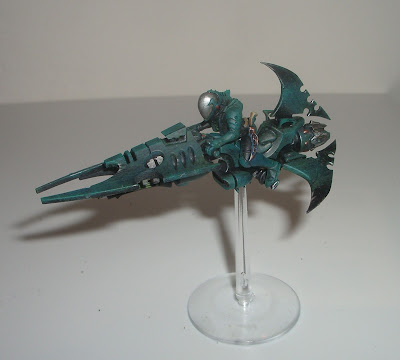 They will go with my existing Dark Eldar, which I painted just before starting this blog. Over the weekend, I based all of the models with GW's Martian Ironearth, which apparently is supposed to crack when it tries. My pot of paint didn't crack, but it did come out looking quite nice anyhow. I think it makes a decent contrast to their rather muted armour and washed-out skin.

These are warriors, the basic troopers. Like most of the Dark Eldar plastics, they are excellent miniatures. These are from the Cabal of the Thousand Chafing Undergarments. 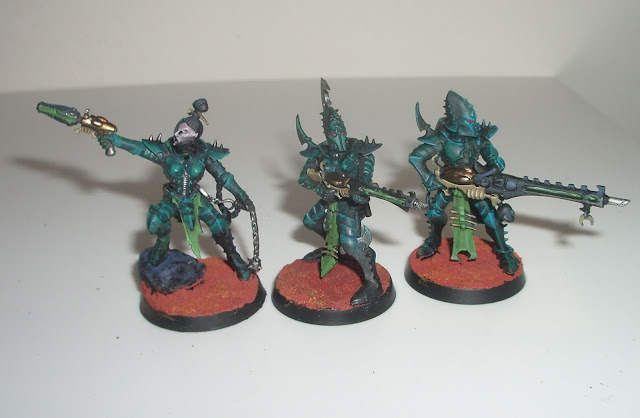 And these delightful fellows are - well, it's a bit hard to give them a name. They are conversions of old metal models, and when they came out, they were called Grotesques. However, their equivalent in the more recent Dark Eldar books would be Wracks. We could always split the difference and just call them Cenobites. In the lore, they are even nastier than standard Dark Eldar, which takes some doing.


I'm quite inspired to get back in the (spiky) saddle with the Dark Eldar. I've got a lot of them lying around. It'll take quite a lot of work, but as they say in Commoragh, no pain, no gain.
Posted by Toby at 13:52 2 comments:

It's been a quiet week, painting-wise, mainly because I was away all of last weekend at an event. So I've only really managed to get one model finished. Here he is: 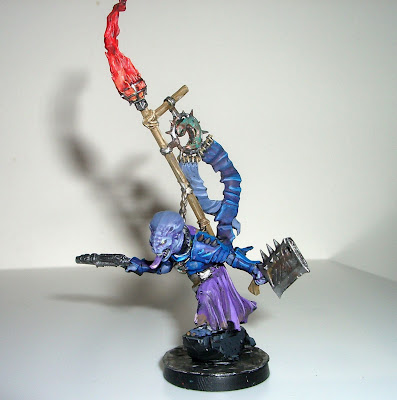 This is the Acolyte Iconward of the cult. He was converted from a skaven warlord, and was given a new head, gun and symbol on his back-banner. I'm surprised how well the colours have come out in this photo.

While I was inclined to paint the fire in a sickly green, that did look a bit too skaven-ish, and the red fire gives the model a bit of colour. Here is a closer picture of his delightful little face. 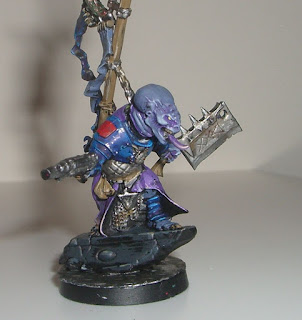 The only problem with painting this guy (apart from the inevitable storage issue!) is that I'm now more interested in going back to my Dark Eldar army. The last big project before this blog was Dark Eldar (turquoise Dark Eldar, to be precise). Last week, I bought a copy of Gangs of Commoragh, a boxed game that includes a lot of Dark Eldar jetbikes and hoverboard guys at a big discount. So now I've got those to paint as well. Just when you think you're getting on top of things, you go out and buy a load more stuff. And by "you", I mean "I".