Here's another battlesuit from the flying saucer style army. This guy will be either the army commander or the leader of the battlesuit unit. He's quite heavily converted, which probably isn't obvious.

It seems that the higher-up you are in the battlesuit food chain, the sleeker and more rounded your armour tends to be. I replaced the chest plate on this guy with a piece taken from some Necron bits I was given a while ago, and added bits of sprue to fill in the gaps that it left. The arms came from a Mantic games Ghar model (I particularly like the weird sci-fi claw he's got) and the head was made out of a headlamp on a 40k Rhino - not out of any particular choice, but because I was running low on battlesuit heads at the time. 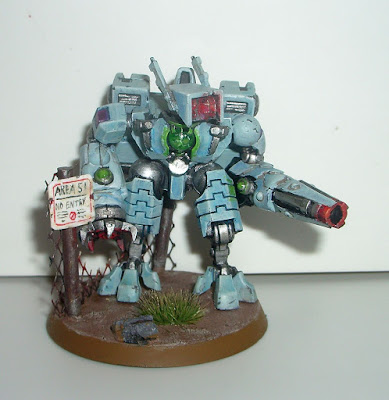 I thought it would be characterful to depict the suit blasting its way out of a wire fence, to represent it raiding a military installation. The base was made out of two pieces of plastic rod with the mesh from a bag of tangerines cut and stuck between them. This plastic mesh makes great wire fencing, I think, and is easy to cut and manipulate. I cut a hole in it and painted the edges to look (hopefully) as if they were glowing where the battlesuit has shot its way out. 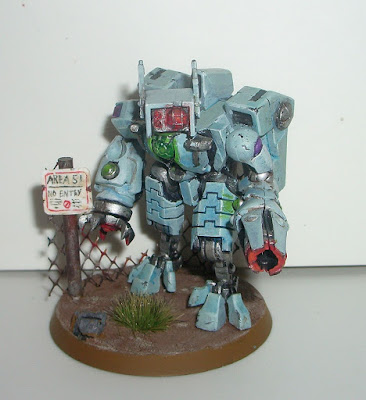 The sign was just a small square of plasticard, cut and painted to reference Area 51, where the US government is said to keep its stash of dead aliens and flying saucers. Because my freehand lettering isn't perfect, I weathered the sign to look chipped and faded, mainly to hide my own ineptitude. 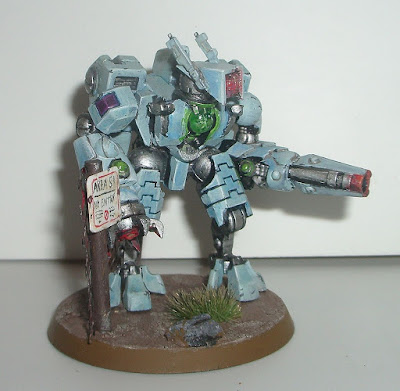 Here are the three "normal" battlesuits together. I quite like making models of this size or scale or whatever. I think the space-invader theme carries quite well across the unit. 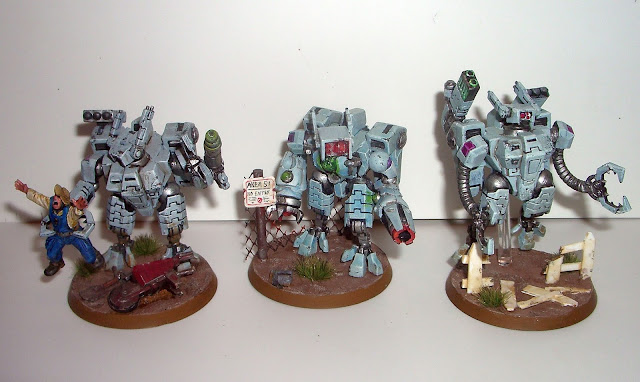 As said on previous installments, I like how you change these models subtly, yet making them refreshing. Nice work!

Thanks! It's interesting working with these rather old, undetailed miniatures. I really like the idea of making an army in a specific style, and deciding what makes that style work. It's been a fun project so far.

Suber nailed it. They are TAU and yet they are clearly not. Great job!