Here are a few more marines.

This guy is a very old model, glimpsed in the last post, and probably from the Rogue Trader/Blue Catalogue time. He's holding a tiny hand flamer and a plasma gun, and has that odd bent-legged "going to the toilet" pose that was quite common back then. The detail is quite soft and simple, with the result that there's a lot of space to add freehand (which I've not added) and shading. 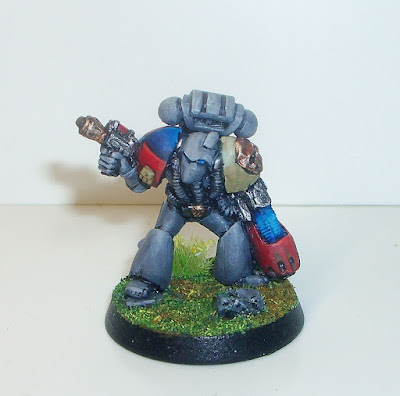 The second model is slightly more recent: I think he came out around the time they came up with the Eldar aspects. He's a marine captain with a bionic leg, and he reminds me of Patrick Stewart. His cloak is a big lump of metal attached to his metal backpack, and it weighs an absolute ton! 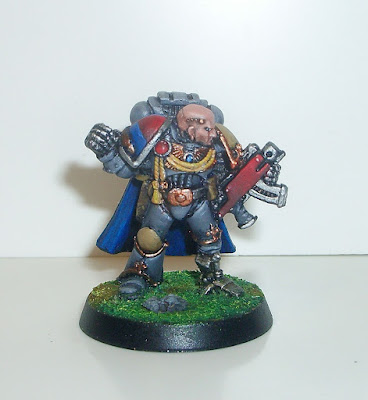 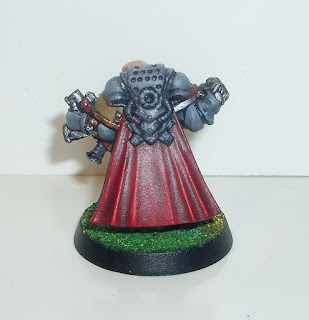 The last chap (assuming he is a chap - it's hard to tell under all that armour) is a plastic model, using the upper body of an old captain, the head of a Grey Knight and arms and an axe from the Space Wolves, that happened to be in the bits box. I could have been a bit sharper on the paint job but I like the way the bits go together. Sometimes it's fun to just sit down a make a random bloke. 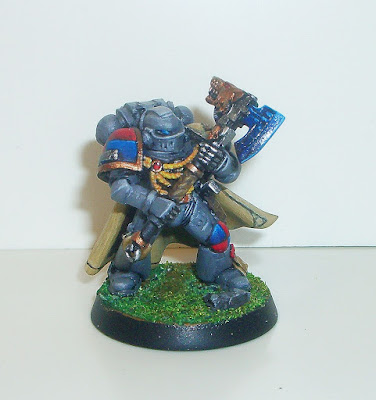 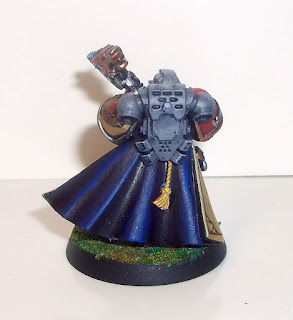 It would be entertaining to try to write some fluff to explain why all these guys look the way they do. As is probably obvious, I've added in bits from all kinds of places, on the basis that they just look cool. Something like this, perhaps?
The Shining Knights employ a wide range of heraldry, much of which does not have a single fixed meaning across the Chapter. The blue-and-red quartered shield is almost always displayed, as is the bone-coloured shoulder and/or knee protector, but additional heraldry is usually added by the individual marine.
The marines are often separated, pursuing small-scale missions or even solitary quests, and as a result ornamentation reflects the marine himself and not the squad he has joined. By and large, the more quests the knight has completed, and the more honour they have acquired, the more ornate the armour will be. Beyond that, it is very much up to the knight.