In my current attempts to sort out my miniatures a bit and buy fewer new ones, I've been repainting old models and tidying up some of the work I did on them. It's often a case of "Nice concept, dodgy execution".

So, here are some fancy-looking mercenaries, who are probably part of the same crew.

First up is Sir Vaylance the Vigilant, Bretonnian knight and walking tank. I tidied up the paint job on him, but didn't do much else. He was based around an old Chaos warrior, with a Bretonnian shield and helmet, an elf sword (I think) and the legs of a 40k chaos renegade (and much green stuff). 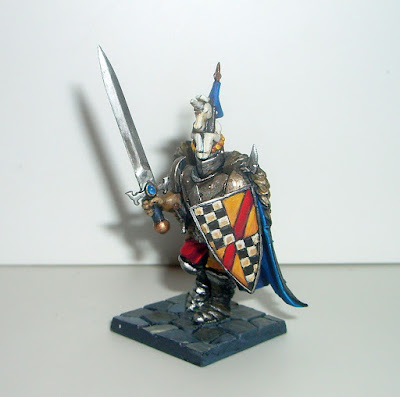 Next is, er, King Henry VIII. He had an Empire engineer's body (from the cannon kit, I think) and guns from a pistolier cavalryman. The red is quite heavily shaded, but the camera hasn't picked it up at all, so it looks rather flat. He's clearly taking out a rival in a stroll-by shooting. 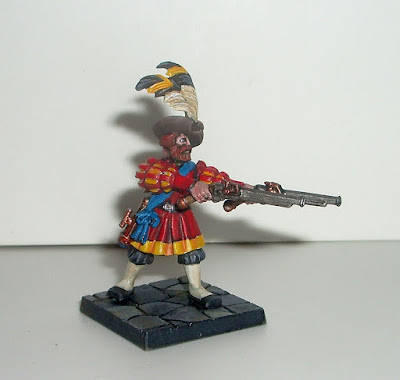 The last adventurer was quite a complex conversion. She has legs from a Sister of Battle that I chopped up years ago, two swords from a dark elf corsair, a skaven cloak and a wide range of odds and ends on her belt that might have come from the Grey Knights, possibly. I get the feeling that she enjoys her work. 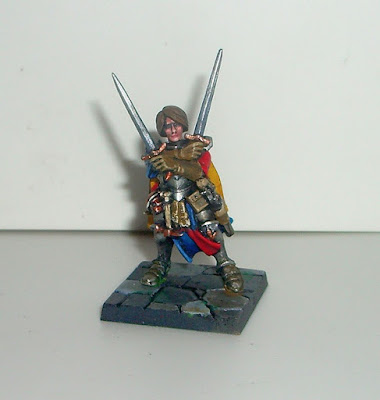 Because I did some of the work ages ago, I've not got any WIP pictures. However, my search through my old models has turned up some interesting things. I'll put some more up in the coming weeks.

They really need an underpaid and overworked peasant to do all the dirty work and carrying for them too!

Wow. The kitbashing is truly fantastic, I love what you did here!!

Three amazing fantasy pieces. Glad to see them getting some love and for you to share it with us.

Thanks guys! It was a nice change to paint some bright colours after all the chaos stuff. More to come I hope!