One of my vague projects has been a team of eldar mercenaries, painted and converted in a vaguely cyberpunk style. I originally made these guys to use in games of Hardwired, and I've enlarged the team over the last couple of years. With the exception of the drones, which are old GW eldar, the team are based on Privateer Press Scyrah elves, with various conversions to make them more futuristic.

This week, I finally finished the last member of the team (for now...), a rather crazy-looking guy with a sword. I thought that he looked vaguely cyberpunk - at least, like the elf version of one of those tall thin blokes I used to see brandishing glowsticks at the local goth club. I reckon every team has a loony like this: he's probably psychic, or can turn invisible, or something like that. 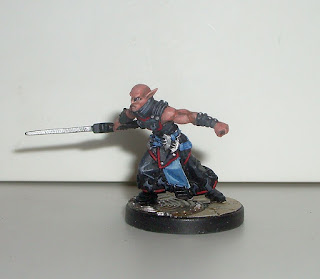 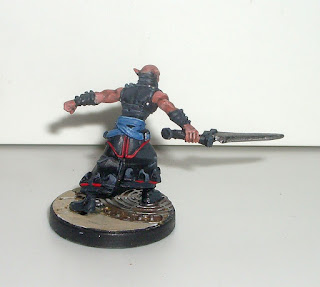 So, that means that the team is finished. For once, I managed to get some half-decent group shots out of my ropey camera.

Here are the three swordsmen: 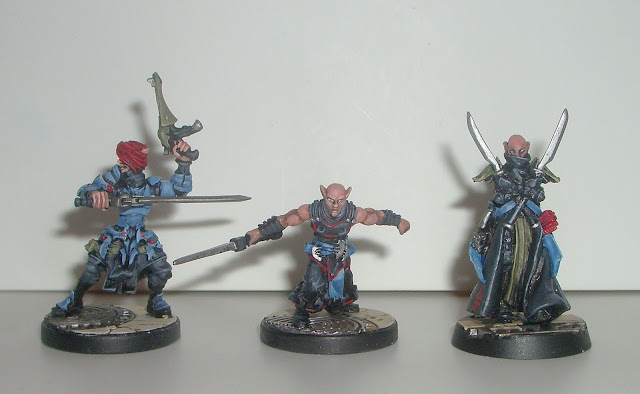 Here is the IT department, consisting of an engineer and his two robot friends: 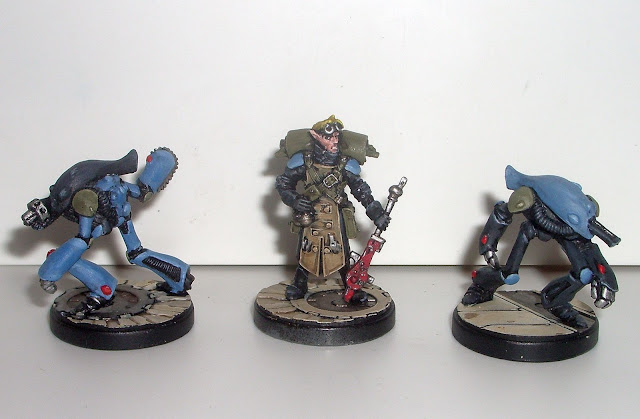 And here is the more normal part of the group - well, heavily armed, anyhow: 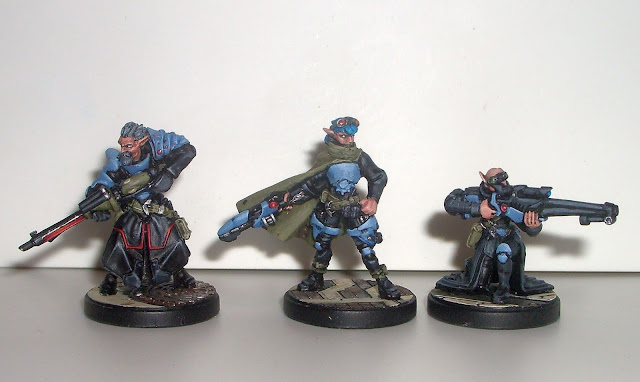 Heavy support is provided by this jolly fellow: 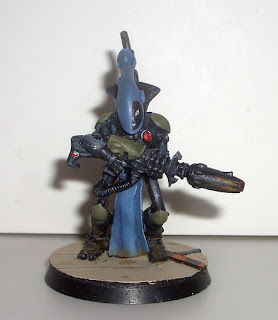 And here's the whole team, showing what expert assassins they are by, er, posing for a photo:

They look really fantastic as a sci-fi group of ne er do wells!

How do you find the war machine gubbins to work with as I’ve never painted them before?

Thanks! I've found the smaller Warmachine models to be virtually identical to GW ones. Some of the older metal sculpts are a bit dated, but they're being slowly replaced, it seems. The larger models require assembly, which involves pinning if they're metal. However, many of the metals have been replaced with very slightly resiny plastic, if that makes sense. It's fine to work with and I reckon you'd get on fine with it.

This is quite a tasty, interesting warband. I said it in the previous post, but I love how cohesive they all look, given their original sources. There's something natural, organic, about them, not a standard, uniform looking. I really enjoy that.

I think it's partly the sculpting and partly the colour choices. Black was inevitable but I went for the blue because it was quite a "soft" colour. Likewise the green bits and bone-coloured floor. I've just realised what they remind me of, standing in a row - the characters from Team Fortress! I enjoy making small squads like this, and they're one of my favourite groups.

A wonderful troupe you have created here, Toby. I love the colour scheme.