Well, it's 2021. Happy new year, and I very much hope this one is an improvement on the last.

Several years ago, I signed up to the first Reaper Bones Kickstarter. The smaller models were pretty variable, but the larger ones were decent. I got hold of a clockwork dragon they were producing and painted it silver. I was never very happy with the paintjob, so I decided to give it another go.

The 40k Chaos army includes the "Helldrake", a mixture of dragon and fighter plane. I don't really like the GW model very much: it's a bit too much like an angry turkey, and has a thruster sticking out of its back end in a rather unfortunate way. I thought that, with the right paint scheme, the clockwork dragon could look like a good replacement. Unfortunately, I mislaid its wings, but I'll find them sooner or later.

I went with a rusted look. I imagine this thing lives in some hellish wasteland, feasting on a diet of armoured cars, and is a dubious ally of the forces of Chaos rather than an outright servant. 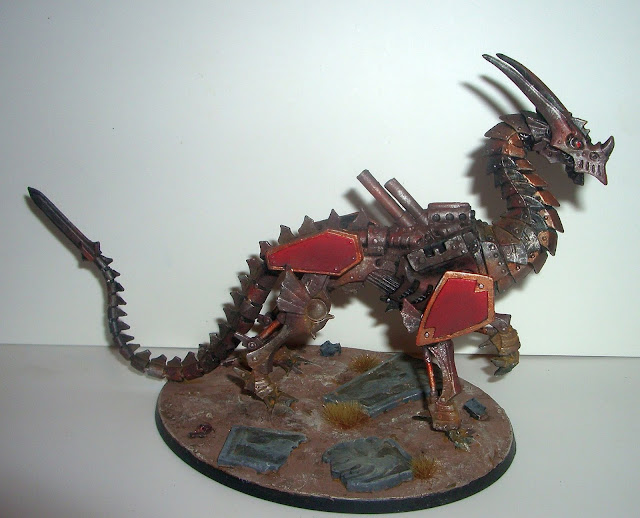 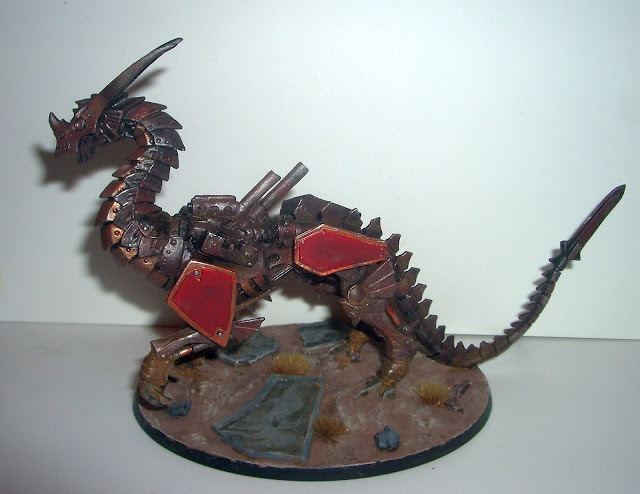 I've also painted a much smaller model: it's a chariot driver from an old chaos chariot, from back in the depths of the Red Period. He was missing his right arm, so I added a plastic chaos arm and a Sigmarine's hammer. I also stuck a shield on.

I've painted him in slightly neutral tones: he doesn't look particularly evil, and I expect that he's some sort of mercenary knight. 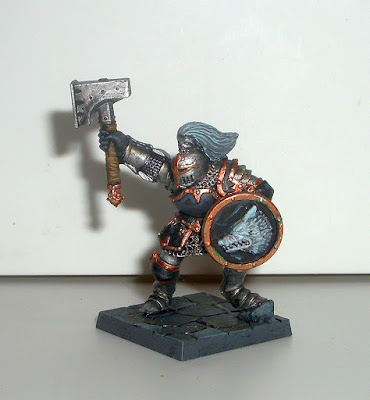 Lovely rusty metal on the Dragon!

Great work Toby, that's a vibrant red you have managed on the hip panels and contrasts well with the dirty bronze / chrome / brass on the rest of the model. It's a nice sculpt as well.

Oh, wow! The dragon is spectacular, it's amazing!! :O

Thanks guys! It is a really nice sculpt: I particularly like the way the head looks like a cow-catcher and a medieval helmet. Definitely one of Reaper's finest moments. I've actually found the wings now so I might give them a go. No idea how I'll paint the membranes, though.