About 25 years ago, I bought a copy of Rogue Trader off a kid called Gary and I've (metaphorically) never looked back. Rogue Trader has provided me with endless entertainment, whether it's the possibility of fielding an army of sand clams or discovering the secrets of Planet Birmingham.

About two thirds of the way through Rogue Trader is this picture. 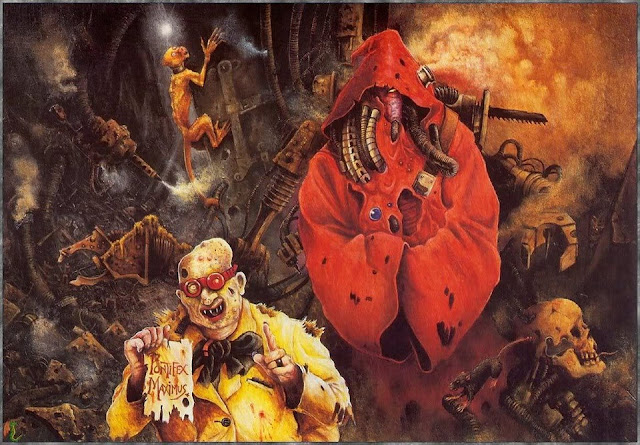 It's by John Blanche and is, I think, one of his better ones. I suppose the chap in red is a tech-priest, and the loony next to him is... well, a loony. It's not as if 40k is short of them. He actually looks like a grimdark version of Christopher Biggins, but let's not dwell on that. I guess these two oddballs lurk in some techno-dungeon, where they perform evil science / plot to take over the world / get in wacky trouble. Anyway, I thought I'd have a go at making them.

The red chap (let's call him Pontifex Maximus, which I gather means "high priest") was based on a new Delaque body, with a Skitarri head and a backpack from a techmarine. Unfortunately, the backpack only had one arm and looked very lopsided (it did on the techmarine, too), so I had to make another one from scratch. This involved an old plastic chainsword, lots of plasticard and some bits from what I think was once a 15mm tank kit. His folded sleeves were sculpted from green stuff. 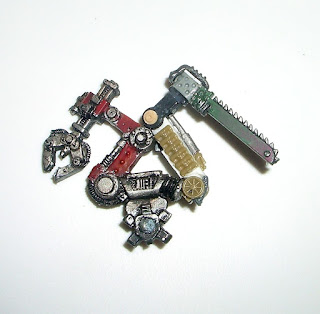 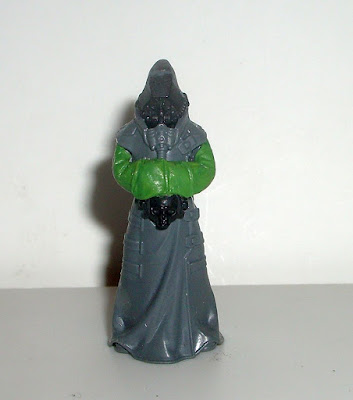 Painting was pretty easy: he's basically red robes and tarnished metal. I gave him blue lenses to draw the eye to his face (or lack of). 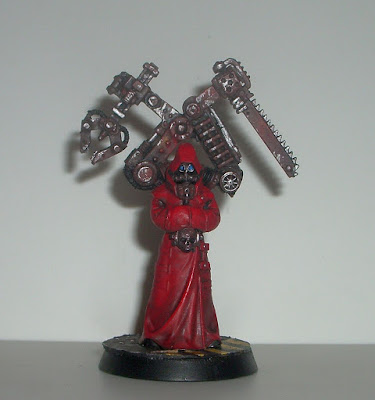 His friend (let's call him Igor) was based on a chaos cultist model, with a head that was left over from a chaos spawn and a placard from some WFB flagellants. His hands were difficult, and after a lot of trouble I converted them out of Frostgrave soldiers and green stuff. One thing I've learned in this project is to avoid sculpting anything from scratch if I can possibly avoid it. He's not quite in the pose of the original loony, but the concept is there. 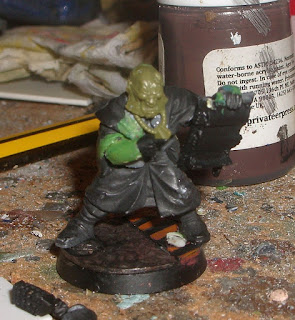 Again, the painting was fairly straightforward, apart from the fiddly business of painting his placard. I gave him rather sickly skin and grubby clothes. 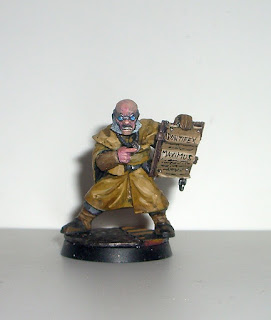 And here they are together! 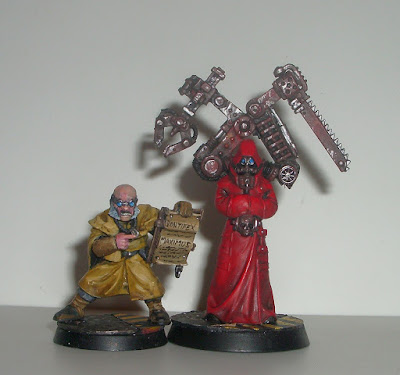 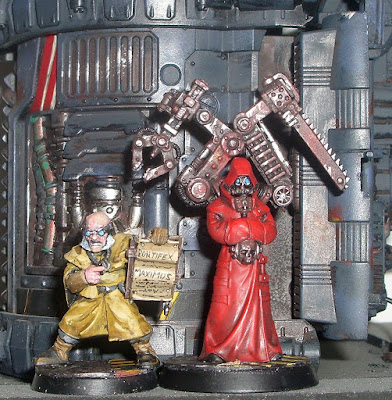 They really have the vibe of the original artwork too which is fab. Can we expect to see them in action against various heroes at some point?

The tech priest looks like a giant Swiss army knife! Nice sculpting on the arms.

Oooohh! I love them! I love your interpretation on both characters! I have sometimes toyed with the idea of replicating exactly that illustration (it's quite a powerful one, isn't it?), but never found myself in the mood for really looking for minis or anything. So I'm super happy to see someone else had the motivation (and guts) to do it. Congrats!

Thanks guys! I'm very pleased with how they've turned out, especially the tech-priest. It's definitely one of the better Blanche drawings, I agree. It's also been lying half-finished on my desk since October!

I would like to include him in some games, but I'm not sure how! Perhaps in the future, though...

OH MY GOD! I have regarded that image so often in my youth... Fantastic job on them, outstanding!

Thanks very much Skully!