Some Bloke and a Dragon

Count Dirge (Clovis to his friends, of which he has none) has been the lord and master of Fort Dirge ever since the death of his father Beauregard at the nasty little hands of a skaven raiding party, fourteen years ago. In that time, Clovis had held back the marsh and its worst inhabitants, patrolled the main roadways and maintained some level of sanity in the place: considerable achivements, in the circumstances.

Fort Dirge belongs to him: the galleries of mouldy tapestries, the impressive collection of broken clocks, the battlements and stones themselves. Through the hovels inhabited by marsh-sifters and the froglodytes, to the reeking wetlands themselves, Count Dirge's word is law. At least, in theory: outside the endless hallways of the castle, the creatures of the marsh are ruled by their own hunger and fear. Most lethal of them all is the sly and vicious marsh-dragon, which has accounted for innumerable skaven and Clovis' right leg. 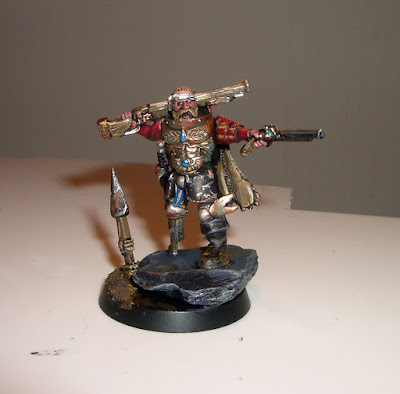 I've made some more progress on the dragon. It's got a sleazy, crawling quality that reminds me of the really old Citadel dragons. I couldn't find a head so I ordered some lizardmen terradon heads from ebay. The terradon head was long enough but much too narrow, so I ended up gluing two terradon heads together and filling in the gaps with green stuff. I think it sort of works. The base is done but the dragon itself needs to be painted red. 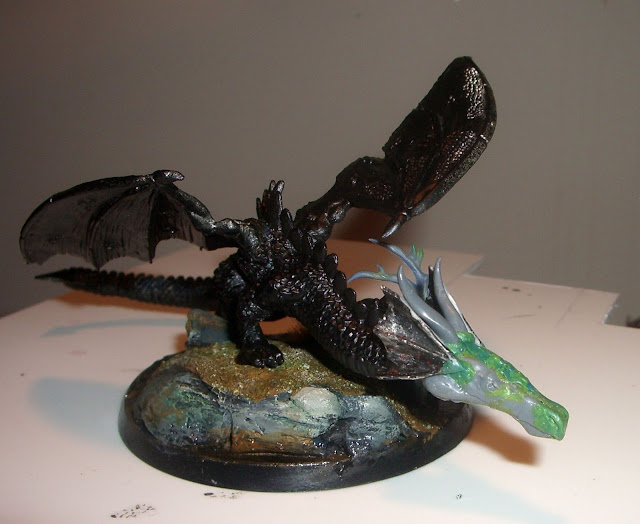 Email ThisBlogThis!Share to TwitterShare to FacebookShare to Pinterest
Labels: AoS 28, The House of Dirge