At the moment, there seems to be a lot of nostalgia in the SF/fantasy wargaming world. Perhaps it's because Games Workshop has finally made new models for both the Adeptus Mechanicus and for Genestealer Cultists, which have always been in their lore but were forgotten about for the last 10 years or so. Or maybe it's because Age of Sigmar has finally killed off the old-style Warhammer Fantasy Battle, both as a game of unit combat and by replacing its Grimm's-Tales-meets-Hironymous-Bosch setting with something more like World of Warcraft. Whatever it is, two new old styles have emerged: Oldhammer and Inquisitor 28.

Oldhammer is about playing Warhammer with old rules, old miniatures (where possible) and a lot of nostalgia. Inquisitor (usually Inq) 28 involves playing the skirmish game Inquisitor with (wait for it) 28mm models. Both styles involve a lot of conversions, naming of characters and general wackiness, and are praised for being, as they say in the rap game, "old school".


[Has anyone ever heard a rapper expressing a preference for the "new school", by the way? Is there even a "new school" of rapping at all? I suspect that rappers are wasting a lot of time arguing the same point here, which they could be using productively to, er, rap about something else. Or take up miniature wargaming.]

Generally, I think this nostalgic gaming is a good thing - after all, this blog is partly about Necromunda. I do think that the rules for older games were often clunky and not a lot of fun, and I think the John Blanche conversion and painting style has its limits (the Adeptus Mechanicus needs to invent flying skull repellent, because those damned things are bloody everywhere). But I've seen some amazing work done in both Oldhammer and Inq 28, often by older games, and I think they deserve special praise because quite often they're working with lead.

Ugh, lead. It's hard to stick together, it's heavy, you inevitably cut yourself when you try to cut it, and it mysteriously becomes as soft as blu-tac if you try to hold it in place with a vice, so that you squash your miniature. And then you have to figure out what all the bits are, and quite often the miscasting is worse than Keanu Reeves in Bram Stoker's Dracula.

Which brings me on to a robot called "Rend" from Dark Age's "Core" faction. I don't know anything about these guys except that they were going cheap, and they are most definitely metal. Rend is presumbly the thug of the group: he's got saws for hands, after all, and is about the size of a small dinosaur. On the other hand, the saw on his left arm looked a bit feeble (I think it's supposed to be battered and rusty, but still) and he doesn't seem to have a head. I don't know much about robotics, but that strikes me as an oversight. 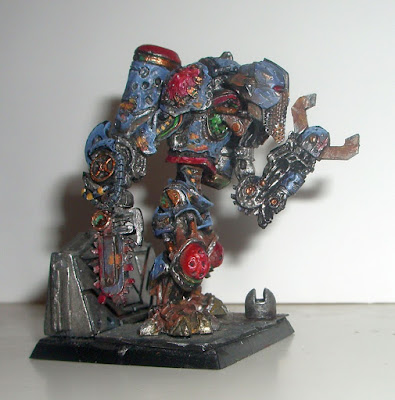 I painted him up as best as possible, but I still don't know whether he's meant to look like a wreck or is just an odd design. I added an armoured helmet from a GW ogre and some plasticard pincers for more threat. After all, what good is a rampaging evil robot without pincers to open and shut? 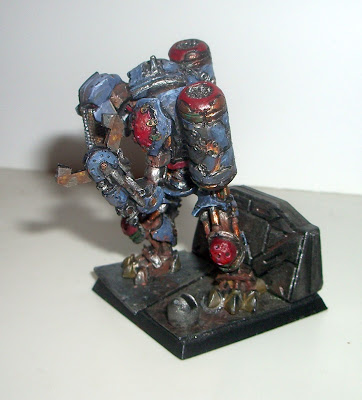 I imagine that he lumbers around the underhive, looking for people to dismantle, creaking and stomping and telling everyone what he is about to do, in traditional robot style. "Pursuing enemy! Commencing dissassembly procedure!"
Posted by Toby at 11:31

Oldschool is best, as stated by someone who never left the 80's :D

I agree with your sentiments Toby, the rules were clunky, but the aesthetic and lore kicked arse....still do IMHO.