I thought I'd have a look at some models I made a little while back, to see how well they'd aged. I did all of these about a year ago, using a lot of parts from the GW Chaos Cultists and Tempestus Scions sets (where do they get these names?). 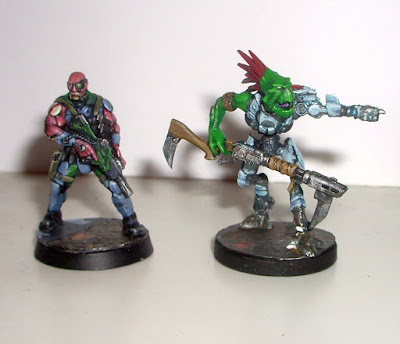 The guy on the left is a lead model made by Warlord Games, and about the only model in their Gates of Antares range that I really like. The right hand chap (Captain Beaky, as he is known to me) is the head and arm of a GW kroot mercenary, and the body, legs and arm of a Mantic robot Dreadball player. I think they go quite well together. 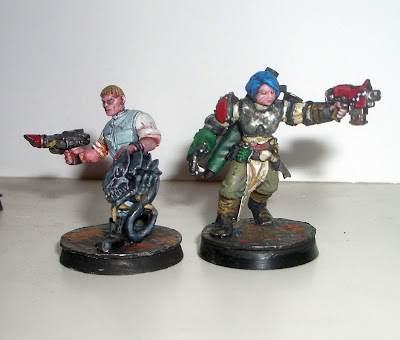 The dubious science officer on the left is a bit of a heroic failure. He uses Imperial Guard legs and a body from a Guard pilot. His arms are from an old Mordheim sprue, and were originally holding a blunderbuss. His little friend is a Tyranid. On the right is a lady made from chaos parts (the legs) with arms from the Scion set. Her body and head were made by casting bits of other models in something called Oyumaru, which is a sort of putty. They're ok, but they do tend to come out slightly distorted. 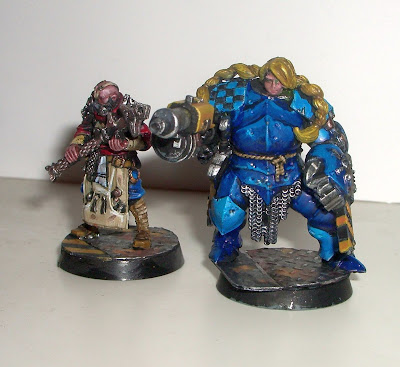 These are my two favourite adventurers. The mechanic on the left is a Privateer Press model and was painted exactly as he came. Hilda on the right started life as a Nurgle champion, and had Space Marine arms added and the gaps in the armour filled with green stuff. Her head was also cast usuing Oyumaru and the pigtails were stuck on (I can't remember where they came from!). At the risk of sounding like a simpleton, I like painting things blue. I reckon that when I get that farm with the rabbits on it, I'm gonna paint them blue as well.

Overall, I rather like these guys. But I think I have got quite a bit better at painting since then. Maybe it's just a willingness to spend more time on models, or just watering the paints down. It makes me think that I should make more random space people.

Anyhow, here's what I made yesterday: the inevitable skull-headed jester/homunculus/goblin thing for Frostgrave. I bet Hironymous Bosch wishes that he'd copyrighted his style. And he looks no better-painted as the others. Oh well. 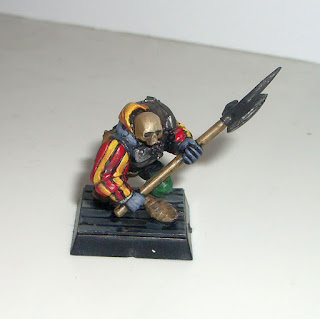