Terror from the Skies!

It is with regret that I report the death of my master, High Lord Skullius von Grimslaughter. Our sources informed us that Puritas Secundus had been subverted by xenos-affiliated cults and had formed a heretical tolerance for aliens. We determined to investigate and set a course of the Puritas system.

On landing, we discovered the dire nature of the situation. Forsaking the path of righteousness, the heretical locals had taken to paying a bizarre tithe of hay and sugar lumps to the aliens. Filled with holy rage, Lord von Grimslaughter resolved to do battle with the xenos at the Basilica of the Turnip Unmashed.

Long we awaited our foe. Then we heard the sound of thrusters, and a high-pitched voice called out in a mockery of human speech. I heard something about friendship and magic, then closed my ears to the blasphemous utterings.

In seconds, von Grimslaughter and Captain Correlius were shot down. Flobard the Beeste fell before he could even activate his chainsaw-knees. All I could do was capture a vid-pic of the creature before it sped away. 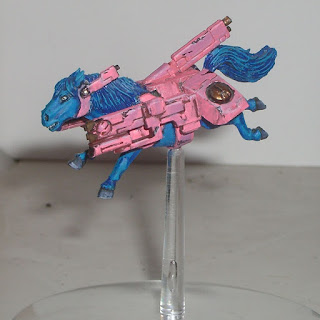 Never have I seen such a foul and unnatural beast. The locals spoke of it with awe, and gave the monster a name: 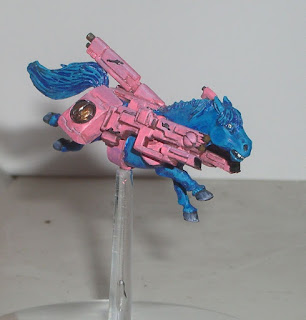 Email ThisBlogThis!Share to TwitterShare to FacebookShare to Pinterest
Labels: Goodness only knows