The Blue Beast of Helmawr Hive

Deep in the bowels of the under-city dwells the dreaded Blue Beast of Helmawr Hive. Quite where it came from, nobody knows: perhaps it is a Tyranid bio-construct, abandoned by some ancient fleet, or a hideous mutant. Most likely, it's an escaped bio-weapon, because bio-weapons have a habit of escaping. You'd have thought scientists would have learned by now.

It lurks in the dark, crouching on a pile of scrap metal and old bone  - the remnants of former victims. But sometimes solitude is not enough for the Blue Beast, and it creeps from the shadows to find new friends. Perhaps it even seeks a mate. The Beast leads an active life, enjoying hunting and the extreme sport of vent-crawling. Its other hobbies are people-watching, climbing (across ceilings), travel to new places (preferably the holds of passing spacecraft) and finding new places and people to eat. It would like to meet anyone fun and nutritious. 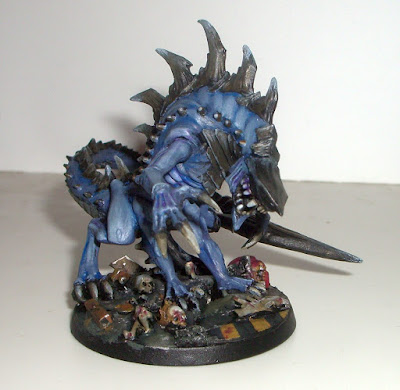 This is a model that I've had lying around for about six years. It's a Teraph, from Privateer Press. To be honest, I'm not that keen on some of their sculpts, especially the cartoony Everblight models, and I'm not entirely sure why I bought this guy in the first place. I lost the arms a while ago, so I added spare arms from a plastic genestealer. They go well with the overall look. 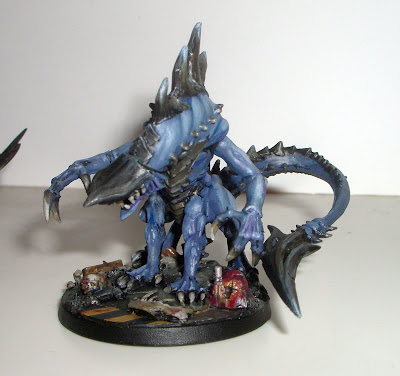 I enjoyed doing all the layers, although what seemed like quite smooth transitions look a bit crude under the harsh light of the camera. The base was tricky, because the Teraph comes with big lumps of lead under its feet. I built around them with modelling clay and put a lot of debris on the base to suggest some kind of sewer-type lair.I like the way that the folds on its back have come out, as well as the shading on its arms. 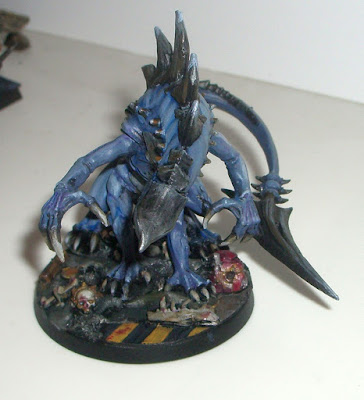 A worthy addition to my Necromunda city, although I can't see it queuing for the kebab stall.
Posted by Toby at 15:58

Is this your blue rabbit?