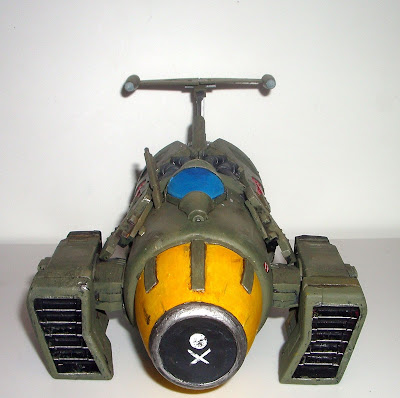 Last Sunday was the final day of my holiday. For some reason, I decided to mark this by sticking things onto a plastic bottle. Long ago, last year, when I used to take the train to work, I'd sometimes be given samples of weird energy drinks by people on the station platform. Most of these tasted like runny porridge, but I'd clearly kept the bottle from one of them.

I had some spare bits from a Mantic drilling machine that I'd used to make a scenic tower. They were curved, like sections of a tube, and once I'd cut holes in the bottle they fitted against it nicely. The result looked rather like a cartoon bomb.

Two engines were attached from a knackered Tau devilfish (the one I used to make a submarine a while ago). The cockpit was a strange piece of lead that had come with a set of model parts off ebay. The nosecose originally formed the top of a deoderant bottle. I used thin plasticard to add some details.

Finally, the tail was built out of a Mantic building part, two bits of old model kit, and the thrusters from a very cheap Star Wars model (it was from one of the prequels, so I had not qualms about hacking it up). Apologies for the quality of this WIP picture. I took about six and this was actually the best. 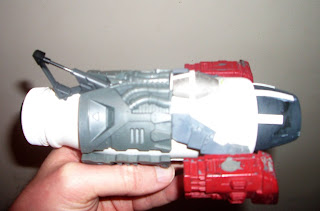 Painting-wise, I wanted to use some bright colours. I went with Vallejo Russian Uniform for the hull, though, as it looks quite military and covers very well. Sadly, the yellow that I chose for the nosecone didn't cover well at all and took about 10 coats (and still isn't perfect). Goodness knows how anyone paints armies of Imperial Fists. 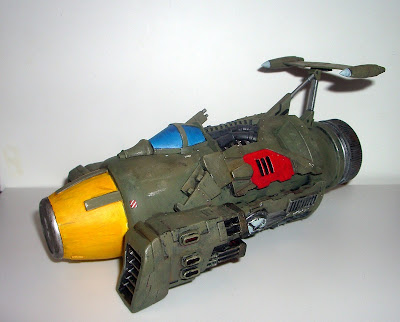 And that's about it, really. The nosecone got a stylised skull-and-crossbones symbol that the artist Chris Foss used on his designs for a pirate spaceship in Dune. I added a few bits of text on the fuselage to suggest those things you get on fighter planes, which presumably say "Unleaded fuel only" or the like. I could add a few more details, I suppose, and the nose doesn't quite feel right to me, but overall, I'm pretty pleased with the end result. 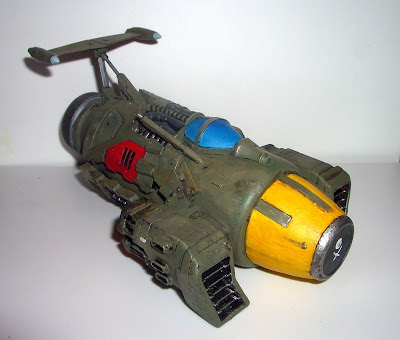 Email ThisBlogThis!Share to TwitterShare to FacebookShare to Pinterest
Labels: Goodness only knows, Vehicles

Ohhhh! I love scratchbuilt vehicles and stuff, and I have to say this is truly wonderful. I love how you merged such different bits into something coherent and believable. Great work!!

Cheers guys! I'm a big fan of scratch-built stuff too. One thing that's really helped is not making stuff for specific armies, just putting bits together and seeing what happens. It certainly came out better than I expected - for quite a while, it was going to be a watchtower, but I'm pleased that it became a spaceship!

Loving the play of words AND the result. Awesome!