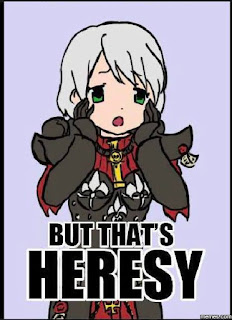 I’m beginning to think that a wargame stands or falls on its special rules, and the more special rules it has, the greater the chance it has of falling.

The problem with special rules is that they override normal rules. They tend to say “No matter what, this happens” or, perhaps worse, “No matter what, you can’t do that”. Let me give you an example.

Years ago, I played Fantasy Battle against a High Elf army. I carefully positioned a tough unit of lizardmen to charge a smaller unit of axe-pixies (or swordsmen or whatever they were). I charged, ready to make the most of my cunning deployment. But it was not to be.

The High Elves had a rule that not only meant that they always struck first, but that they got to reroll any misses. My cunning lizardmen were simply wiped out before they had the chance to strike back. Had the High Elves not had that rule, I would have won hands (claws?) down.

I learned my lesson. Quite simply, anything that touched the axe-pixies would die without a chance to hit back. So I bought some fire-breathing lizards. The next battle, I kept away and set the whole axe-pixie unit alight from range. Sometimes, revenge is a dish best served flambé.

You might argue that I ought to have known about the special rule before I played. I'm not convinced by this. I feel that, as a fairly casual player who nevertheless wants to have a fair chance of winning, I shouldn't be confronted by rules that can't be got around and seem to go against the common sense of how you win a tabletop battle (by manouvering, charging first, etc). The rules should roughly follow the logic of the game.

The special rule, therefore, had two effects. First, it won my opponent the first battle without him having to put in any effort. It caught me by surprise and meant that all my manouvering was a waste of time: anything attacking the axe-pixies would just die. Second, it meant that I never went near them. Every time they appeared, I killed them from range.

So what was the upshot of this? Largely that, by having this special rule, the axe-pixies were a waste of space. My opponent didn’t get to use them, because I wouldn’t and couldn’t fight them, so buying them was something of a waste of money for him. And they forced me into one particular tactic: not a dirty trick as such, but one that trumped his unit as it would have inevitably trumped any of mine if I had let it reach them.


I doubt this made the game better for either of us. This sort of thing doesn’t open up tactical opportunities: it closes them, forcing players to get around the special rule in a particular convoluted way. Neither I nor my opponent became better players or had more fun because of it.

This is one of the reasons why Necromunda is such a good game. Because everyone is so similar (they’re human riff-raff), they all have nearly the same rules. Nobody can spring huge surprises on the other. When you lose, you don’t feel cheated, and when you win, you feel like you’ve earned it. And the games are almost always close run. If you are going to have special rules, they should: (1) apply to everyone (in which case, are they still special?); (2) have a very small, limited effect; and (3) not go against the common sense of a player who doesn’t know them.

Ten years later, am I still hung up about the High Elves (who were not even proper elves, because proper elves wear green and live in trees) and their special rules? Of course not. But it's a fair point. And I watched the axe-pixies burn. Yes, burn.

Email ThisBlogThis!Share to TwitterShare to FacebookShare to Pinterest
Labels: Crazed Ravings of an Idiot

I agree Toby, special rules end up making the game rather dull.

Definitely. What's the point of playing if, no matter how cleverly you arm your troops and play the game, your opponent has a rule that automatically trumps you?