Please note that the following post contains graphic descriptions of both rooting and tooting, and hence may not be suitable for those of a sensitive disposition.

This weekend was the Glastonbury Festival, and so my friend James and I met up to stay inside, play board games and drink tea.

First was Project Z, Warlord Games' zombie wargame. This was the first time either of us had played it, and for simplicity's sake we took on a solo scenario, controlling three survivors of the apocalypse each. We had to get from one side of the board to the other, battling through a shuffling horde of the undead on the way.

The rules were reasonable, in that they made sense and had plenty of opportunity for strategy and cunning. We played the scenario twice: the first time, all the survivors reached "safety" (in this case, a ruined building that was about as safe as a house made out of dynamite in the middle of a forest fire). The second time, one of our survivors, a bold fellow with a chainsaw, was pulled down and devoured.

Many zombies were slain, so many that the undead were forced to recruit some extra help from James' stock of Konflict 47 German zombies. The modern and Nazi zombies sealed a sinister pact in a scene that was much like the inlay art of Dark Side of the Moon.

Next up was the very reliable Shadows of Brimstone, also known as Cowboys v Cthulhu. Once again it was time to mosey on down to the old mine and draw a six-shooter on some varmints from Hell.

The first mission involved slaying industrial quantities of zombies, after which we were both rather tired of the shuffling dead, even if some of them were dressed like flamenco dancers. Taking on a new mission, both Sherrif Meatballs and Doc Casserole pulled their weight again, butchering a wide and colourful range of monsters and sending them to wait at the edge of the board. 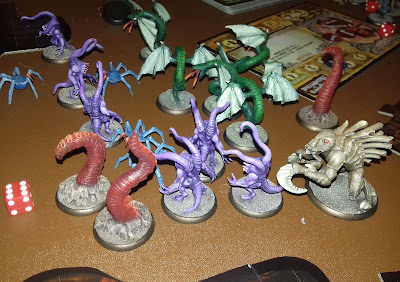 In a truly manly climax, Sherrif Meatballs whipped out his Sherrif's badge, the sight of which sent Doc Casserole into a frenzy. Shooting wildly in all directions, Casserole squeezed off twelve bullets in a single turn, like the rootin', tootin' son of a gun that he is, scything through a range of monsters, and the day was saved. The mine was strewn with more bodies than a Nick Cave ballad. The two adventurers swaggered off to town to drink whiskey and have their mutations cut off.


And then we tried Shadow War: Armageddon. This game pits small groups of Warhammer 40k soldiers against each other, and is strongly based on Necromunda. So far, so good. James took five harlequins and I used my squad of ork commandos.

And then it went a bit wrong. The harlequins had special rules that made them very hard to hit and completely impossible to pin, as well as being able to pass straight through cover. They charged the orks and went through them like a knife through butter. The orks fought back - and died immediately. It was clear that the game was as good as over, and we called a halt to things.

My feeling is that the various forces are too different for the game to run smoothly, and the ability of the harlequins to ignore the pinning rule (which is pretty fundamental to Necromunda) was a gigantic advantage. We decided to give it another try, but with less extreme forces. Bit of a shame, that.

Anyhow, a very good weekend was had by all (well, both). Quality stuff!