Converted Crusaders of the Cardinals Crimson

A very quick post here. Ages ago I found these guys on ebay for half price:

They're from a not-quite-defunct game called Wrath of Kings, notable for its quirky sculpts remeniscent of the old Confrontation game that Rackham used to make. They have a strange mix of medieval and steampunk equipment.

It occurred to me that they could be good models to accompany the Sisters of Battle. I expect that mobs of chanting monks are about as common in the 40k world as hedgehogs on the British road system, and probably suffer much the same fate. Also, the background mentions some people called the Cardinals Crimson, who sometimes send crusaders to help the Sisters (in between making prog rock albums).

I bulk-painted five of these guys, using a pretty fast technique. As a result I won't be winning any prizes for brushwork, but they look decent (if suitably weird) together. 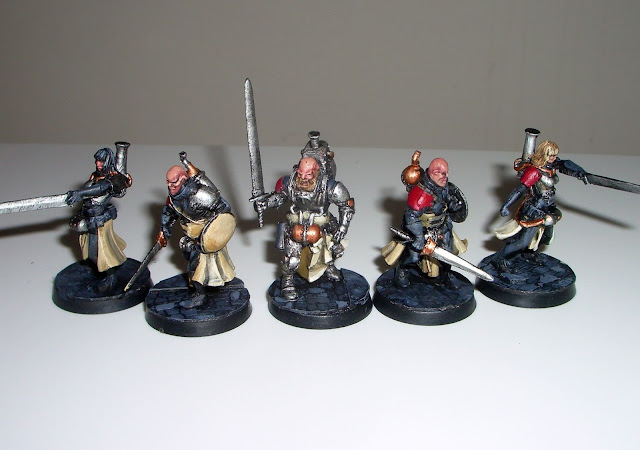 Finally, this is what I'm working on at the moment. It's not terribly clear, but it's an old cannoness body with added arms. A small dragon-type creature is perched on her left gauntlet, cut from a dark elf knight years ago.