After converting the Decimator warjack from the Khador boxed set, I still had a Juggernaut warjack left. The Juggernaut is, I think, the better of the two in terms of looks. I'm not sure why it has an axe - surely punching things would do just as much damage - but perhaps when it's not being a warjack it doubles as a lumberjack.

Anyhow, in keeping with the last model, I turned the body around, cut off the round thing at the back (the door to its boiler, perhaps?) and mounted a new head there. This time round, the head was from a black orc. Barrels of fuel were added to the new rear of the model, and the armour slightly enlarged to protect them.

I repositioned the legs for a running effect and cut off the groin plates off. These were then added to the left shoulder for extra shielding, along with an old Warhammer shield that looked appropriate. A couple of plasticard squares hid the marks where the old plates had been. 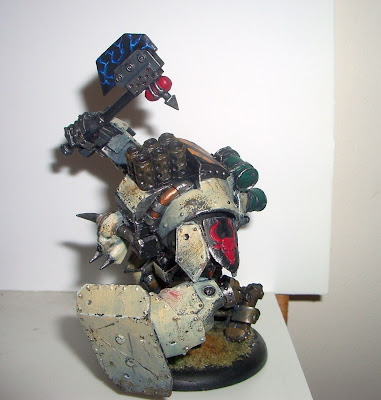 Weapons-wise, I elongated the shaft of the axe to make it look more in proportion, changed the position of the blade slightly and painted it with a magical lightning effect to justify it being there. It's the first time I've tried this for ages and I think it came out reasonably well. A shield was added to the left arm, made out a piece of plastic from (I think) a Dust Tactics model that I doctored years ago. It's always worth keeping these things. 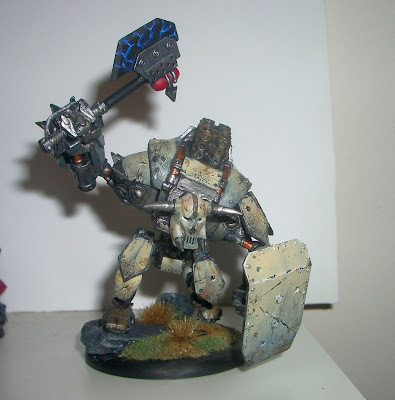 I was worried that he wouldn't work next to the previous warjack, but there is sufficient difference between them, and sufficient similarity, for the two to look right. Overall I'm very pleased with both of these models. With a bit of luck, the errors in the painting are disguised by the weathering, and vice versa. I only now have their commander to paint. He doesn't look too tricky - but that remains to be seen.