Last Saturday I went to Colours in Newbury, a wagaming event held at the racetrack. I took along a large amount of cash (by my standards, at least) and blew it on a few little people and a lot of terrain. I really enjoyed the day: I was able to meet up with my old friend James and some of his mates from the local wargaming club (very nice guys) and shamelessly discuss wargames for several hours.

I also got a decent look at the new Bolt Action supplement, Konflict 47. It actually looks a lot better than I'd thought. I'm quite tempted to get some British automata, which look great - but that would involve figuring out how to operate the Warlord Games website, for which an Enigma machine is required. 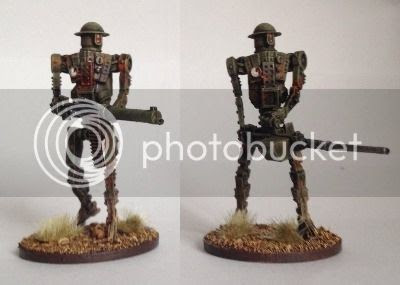 One of the best things about these events is the opportunity to look at unusual models and maybe get hold of things that you wouldn't find otherwise. I picked up two second-hand Escher gangers for Necromunda for £3 each - a massive saving on what I'd have spent on Ebay for them - as well as some kind of Dark Angels guy in a robe missing his sword for £1. Obviously vital purchases.

Since then, I've not done a vast amount of painting, but I did manage to do one of the terrain bits I got from the Ainsty Castings stall. It's a broken robot, and fits the improvised look I'm going for with my Necromunda terrain at the moment. The whole thing is one piece of cast resin. 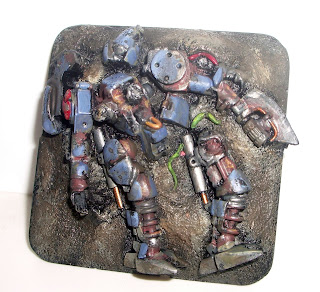 I also got a couple of resin craters from a company called Urban Construct. I put a bit of thin plasticard under one of them (it had a hole in the middle, like a doughnut), sealed the base with Green Stuff and filled it with tinted Water Effects to make a delightful hole full of rancid gunk. 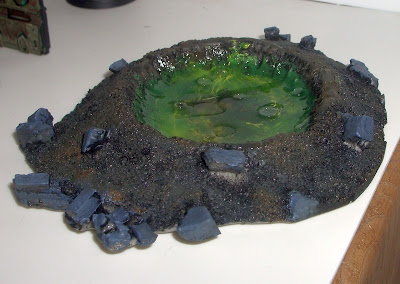 I used the same technique that I used the last time around, painting the inside of the crater dark green (fading to near black in the centre to suggest depth), adding the Water Effects and half-stirring in yellow and light green once it had dried a bit. I had forgotten how much this stuff shrinks as it dries, so I ended up using several layers. To be honest, there are nicer products to work with, but look at the colours! And that, out of interest, is how they make Mountain Dew.

I think it's about time I made a big piece of terrain. I've got plans, but it might be a while before I get around to it.