Minions of the Mechanicus 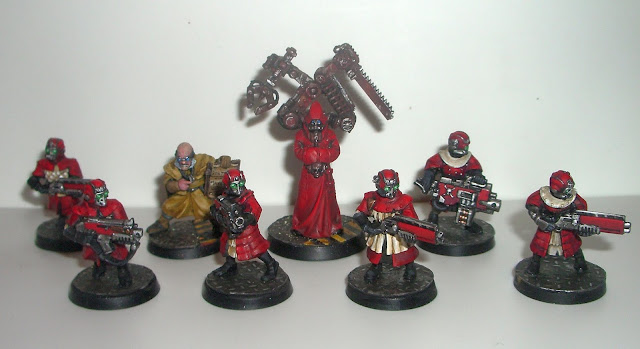 There are three ways for a manufacturer to make a miniature that holds a rifle-shaped gun (or a crossbow). The first is to make both arms and the gun as one piece of plastic, that you attach at the shoulders of the miniature. This is convenient for the modeller, but takes up space on a frame of parts and means that those arms have to be linked to that particular gun.

The second is to make both arms and the gun separately. This allows the same arms to hold different guns, but it is really fiddly to assemble, and often requires the model to have a huge ugly left hand to cradle the gun.

The third is to make the right arm (or at least the arm with the hand that pulls the trigger) and the gun in one piece, and the left arm in another. This seems to be the option currently preferred by Games Workshop, whose Skitarri and Genestealer Neophytes use this system. Because a lot of infantry kits have a choice of two basic weapons (autoguns and shotguns for the Genestealers), you end up with a lot of leftover right arms and no left ones.

The upshot of all this verbiage is that, if you want to convert models to use leftover guns, you need to get used to making left arms. That means using sculpting green stuff sleeves around some sort of wire. Ages ago, before there were any Skitarri models, I made some little robot people from old Bretonnian man-at-arms models (men-at-arms models? I don't know what the plural is. Pretty ironic about the arms, though). I gave them heads from the Tempestus Scions box and guns from the old plastic Space Marine scout kit. What I didn't do was give them new left arms, as I figured that the sleeves on the Bretonnian models would suffice.

The end result was that they had normal looking right arms and tiny left ones. Obviously, there are some odd characters among the Adeptus Mechanicus, but I don't think anyone removes half their left arm without at least adding a few metal tentacles. So, I went back to them, and lengthened their left arms with paperclip wire, then sculpted sleeves out of green stuff. Like this: 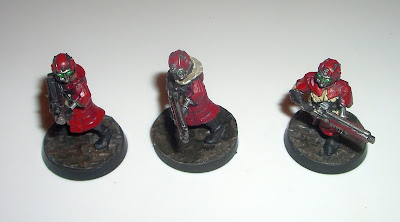 Painting-wise, I went back and brightened the red up, tidied up the other colours and, well, that's about it. I like these guys; the Bretonnian models they're based on are quite small, so they look quite scrawny. I imagine them scurrying around the lair of their boss like ants, guarding the corridors and doing general minion stuff. 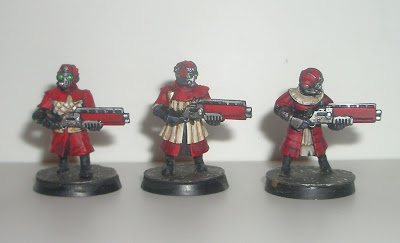 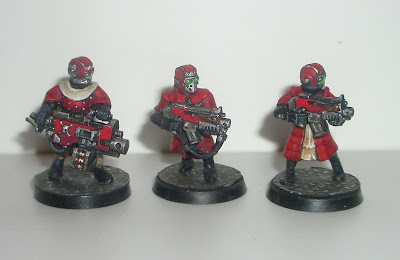 Hey, these are pretty clever conversions! The Bretonnian/Scions combo is more than enough to get my attention (they look simply perfect! Awesome looking), but the left arms trick deserves all my admiration. Well done!

Thanks guys! Nice to get them up to speed with the other models!