A Friend For Myron Jubalgunn

What a great book Rogue Trader is. There really is something for everyone, whether it's the God-forsaken hell-planet of Birmingham, the possibility of fielding an army of sand clams and man-eating face flannels (represented by small pieces of Blu-Tac, of course), the culinary habits of the zoats, or the exploits of the mysterious criminal Abdul Goldberg (sources seem to agree that he has a beard, but otherwise, who knows?). And then there were four pages of pictures of Logan's World at the rear of the book. Like many other older gamers, I am the proud owner of a piece of terrain with MARINES OU written across the back.

One bit that I noticed was this piece of art by Jes Goodwin of "The Renegade Myron Jubalgunn" and his companion, "a dangerous alien of unknown origin". 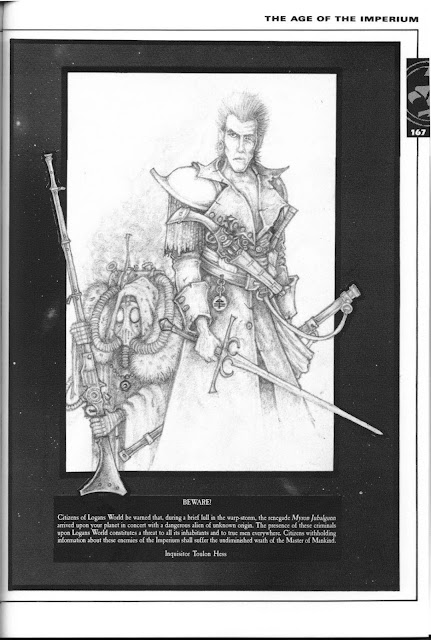 Under the picture, one Inquisitor Toulon Hess warns that these two have recently arrived on Logan's World, and that anyone helping them "shall suffer the undiminished wrath of the Master of Mankind". Ouch.

Actually, they both look like dangerous aliens to me. Jubalgunn himself could be an unusually seedy eldar, and his fancy sword and the rune on his belt seem to back that up. His friend looks like a cross between a skaven marksman and a plague globeadier, and reminds me of some concept sketches for space skaven that are in Jes Goodwin's book The Eldritch and the Gothic. Anyhow, I thought I'd have a go at making Myron's friend. 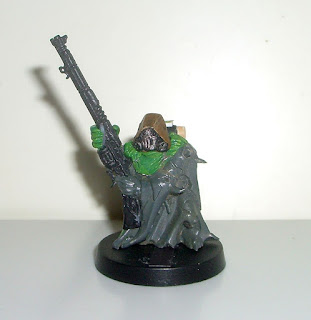 The starting point was that this guy is small, hunched and covered in some sort of robe or coat. I found one of the skaven bell-ringers off the Bell of Doom kit, and carefully cut him free of his fellow monks. He got a chaos cultist head, which has a hood and gas mask, and I sculpted some robes and a fur collar with green stuff. The backpack/breathing apparatus was made from plastic off-cuts. 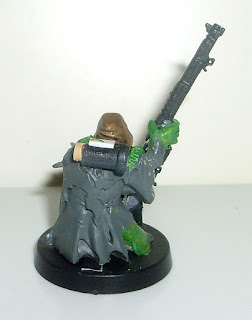 Then came the tricky part. His gun was made from a spare Skitarii rifle, with the hands cut away. It was very fiddly. I had to resculpt his right hand, which I don't much like doing (I'm fine filling in gaps with green stuff, but sculpting from scratch is outside my skill range). I didn't give him the big breathing tubes that he has in the picture, because I never find that green stuff tubing looks all that convincing when I do it. Likewise, the gun and the sleeves hide the need to add bandages to his arms.

This is what he looks like with a bit of paint: 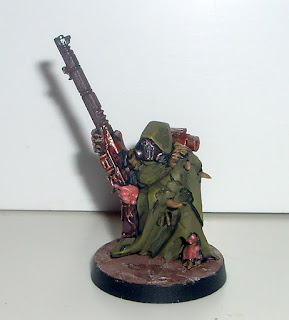 And here's a rear view: 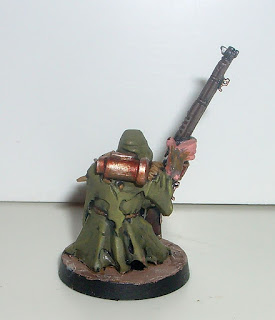